Preparation For The Hifi Show 2015

Been thinking through what I would like to exhibit if given the opportunity at The Hifi Show in March 2015.  Many options and configs have lead to this. I wanted to go with as compact an Linn active system as possible, so it starts with a FiiO x3 and finishes with Katans. Shame the amp has to be so big, but there are active crossovers and 4 power amps in there. 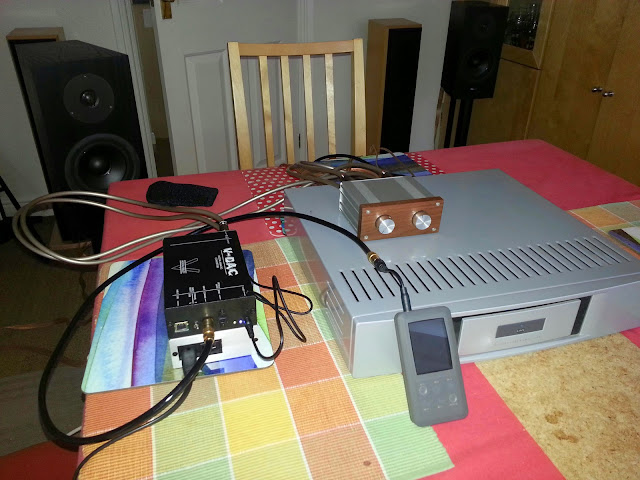 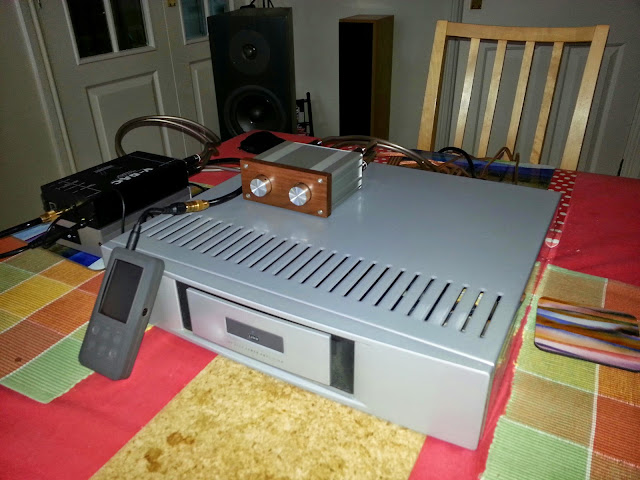 Posted by Neil Hallworth at 13:59 No comments:

In this post there's a pictorial explanation of changing Linn's 2-way Katan speaker from passive operation to bi-active using stereo active cards inside a Linn AV5125 power amp.  They're in sequence order.


NOTE:  IF YOU ARE AT ALL UNSURE OR LACK CONFIDENCE, TAKE THE SPEAKERS AND AMP TO A LINN DEALER TO HAVE THIS WORK DONE.

THE SEQUENCE BELOW ARE THE STEPS I TOOK TO SUCCESSFULLY MAKE THIS CONVERSION.  IT WAS SUCCESSFUL FOR ME, BUT NO RESPONSIBILITY IS TAKEN FOR THE ACCURACY, OR OTHERWISE, OF THIS INFORMATION. 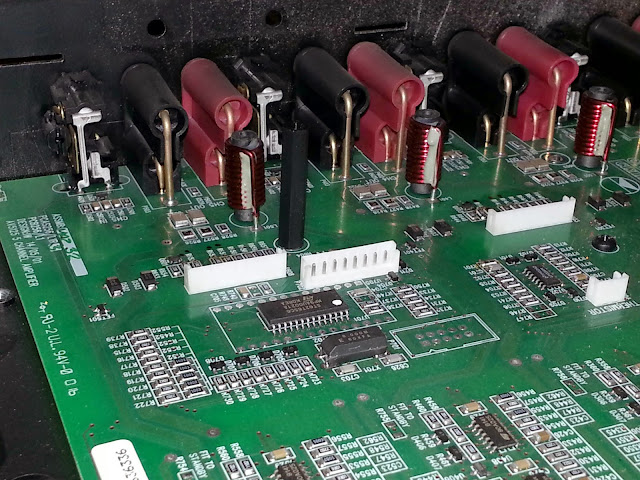 ALSO NOTE THAT I HAVE FITTED THE BASS CARD INTO THE LOWER SLOT AND THE TREBLE CARD INTO THE UPPER SLOT.  ALL THE STEPS DESCRIBE THE SEQUENCE I USED FOR FITTING THE CARDS THIS WAY AROUND.  THEY CAN BE FITTED THE OTHER WAY AROUND, BUT CONNECTIONS WILL BE DIFFERENT, SO TAKE CARE.

A couple of weeks back a post on the Linn forum inspired me to dig out some Linn ceiling speakers that had been in the garage for a while, and build a "portable" Linn based box.

It filled a couple of hours, but the results weren't too good - cardboard might be quick to use, but its not too good structurally, nor sonically.  Not a surprise really. 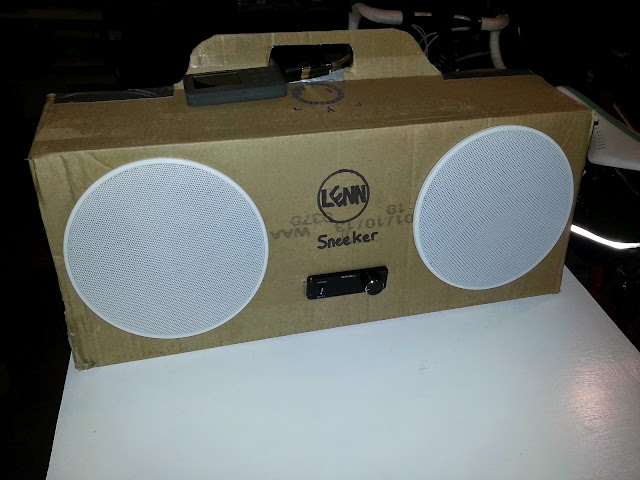 A few days ago I dismantled the box.  The plan was to think about Part 2 and turning the box into something more substantial.  When taking out the Linn Diskreet speakers, I found I could remove the crossovers and drivers from the frame quite easily.  Turns out they're only 100mm coaxials inside, looking rather like car speakers.  They're the same size as the woefully cheap speakers in my touring caravan, so that's where they're going.

So what next?  Well, there are few bits and pieces in the garage, so I dug out some old Linn tweeters (probably from the Index 2, but not sure really) and some Mission 100mm mid-bass drivers.  I've also found a cabinet on ebay - more of which later.  But its going to be a luggable solution rather than a portable one, methinks.

So I've used some scrap board from the garage which is now cut to the same size as the cabinet that's on its way, so I can experiment with speaker layouts.  Below are the options I've considered: 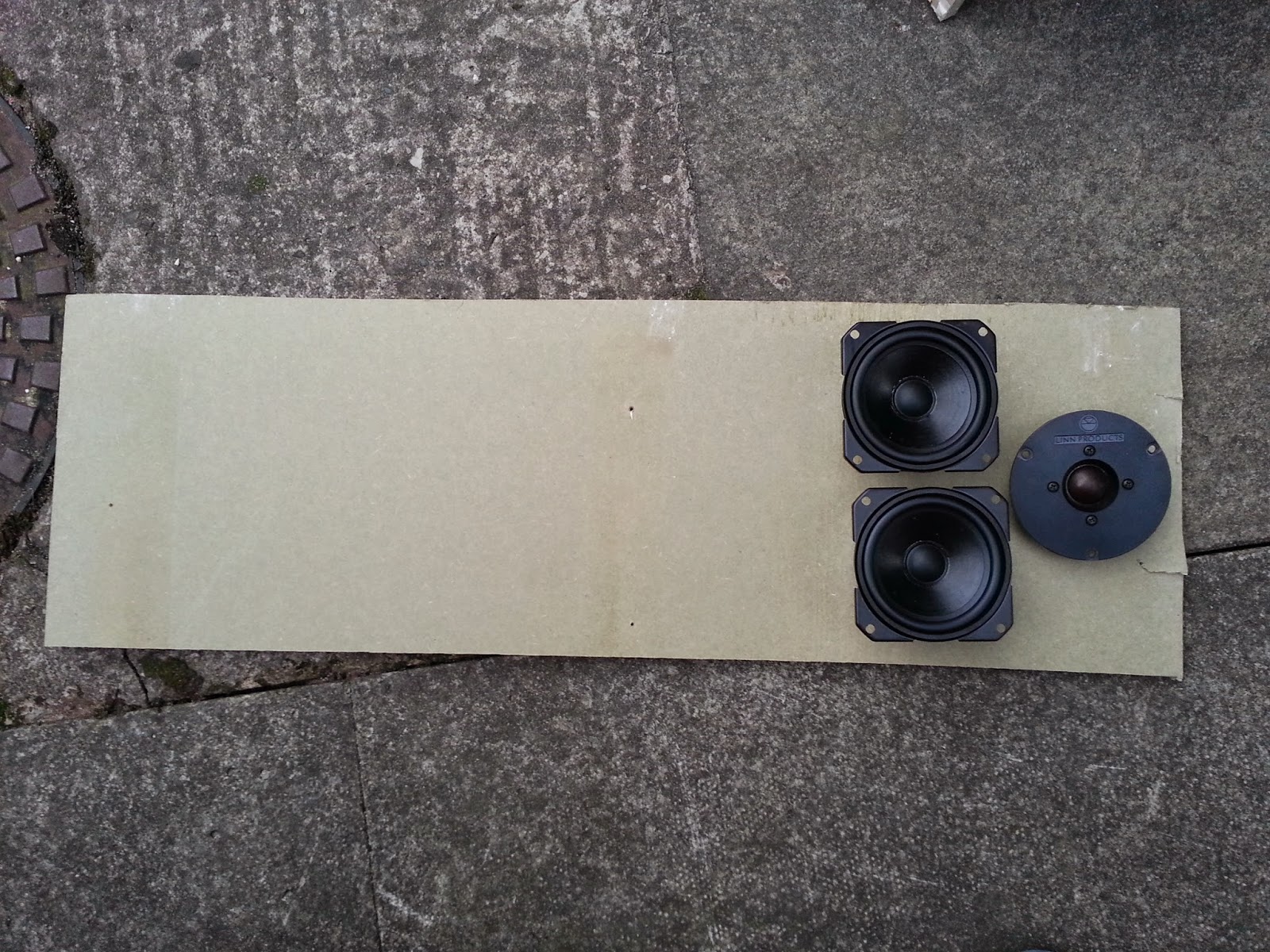 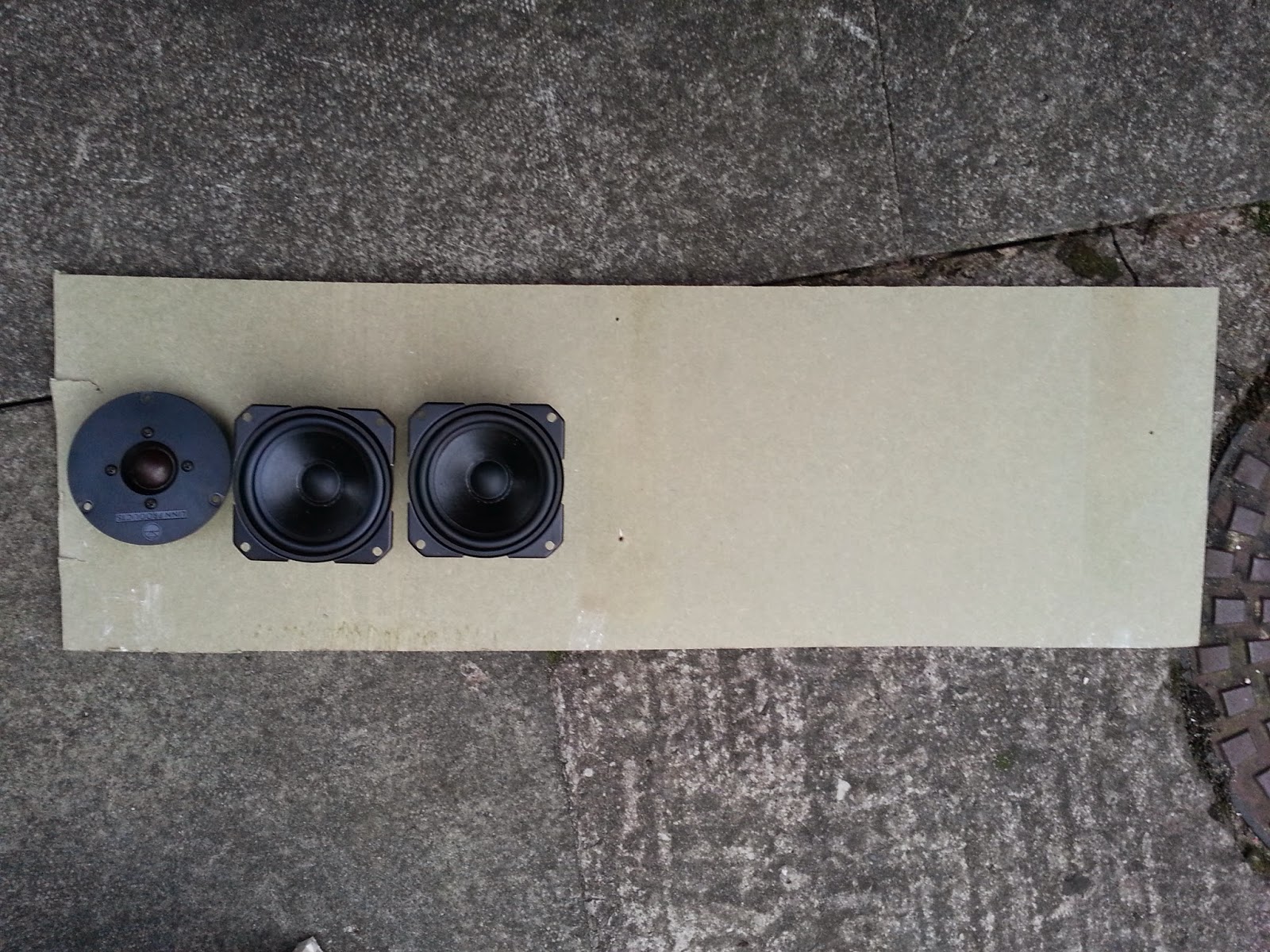 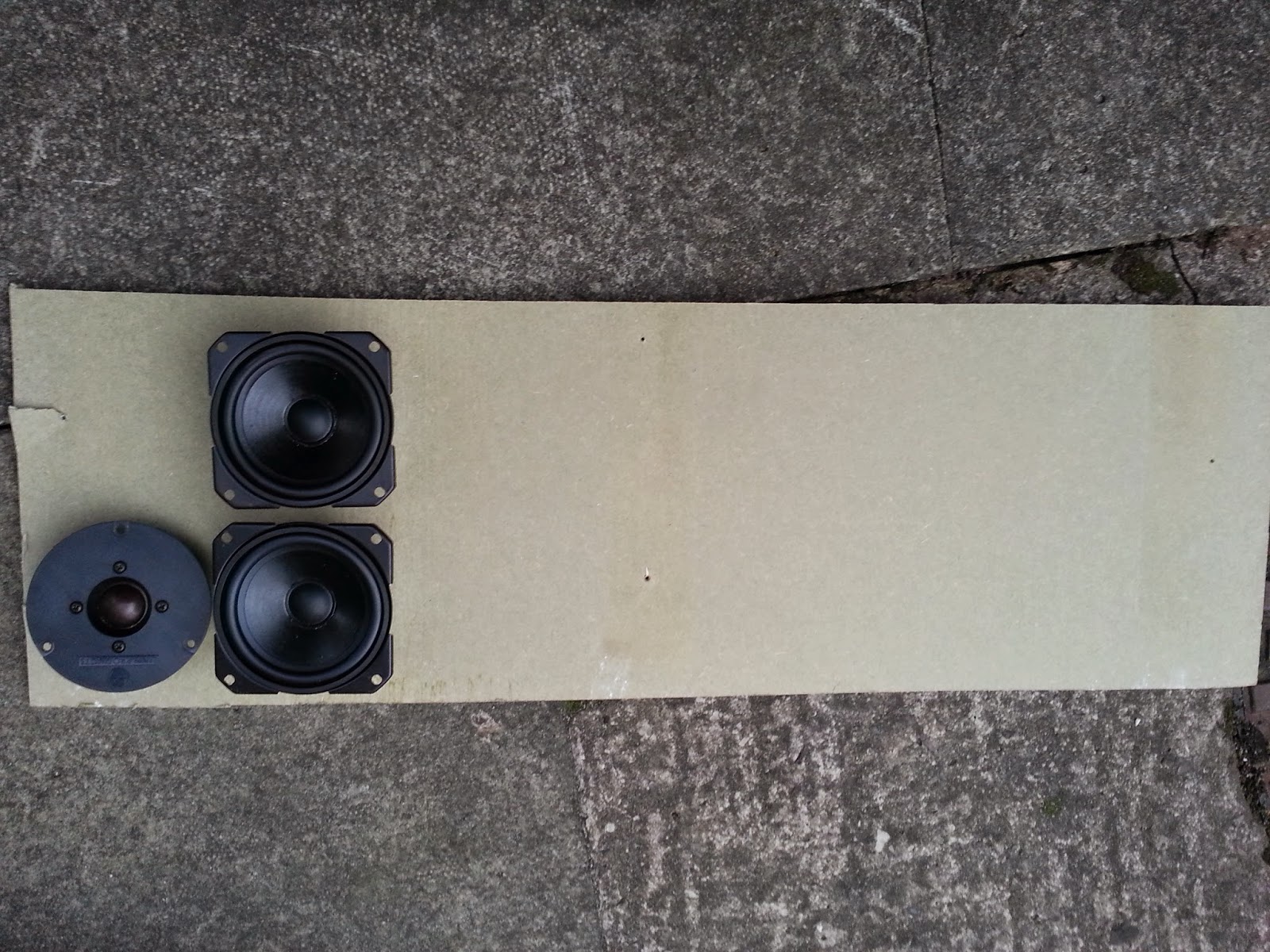 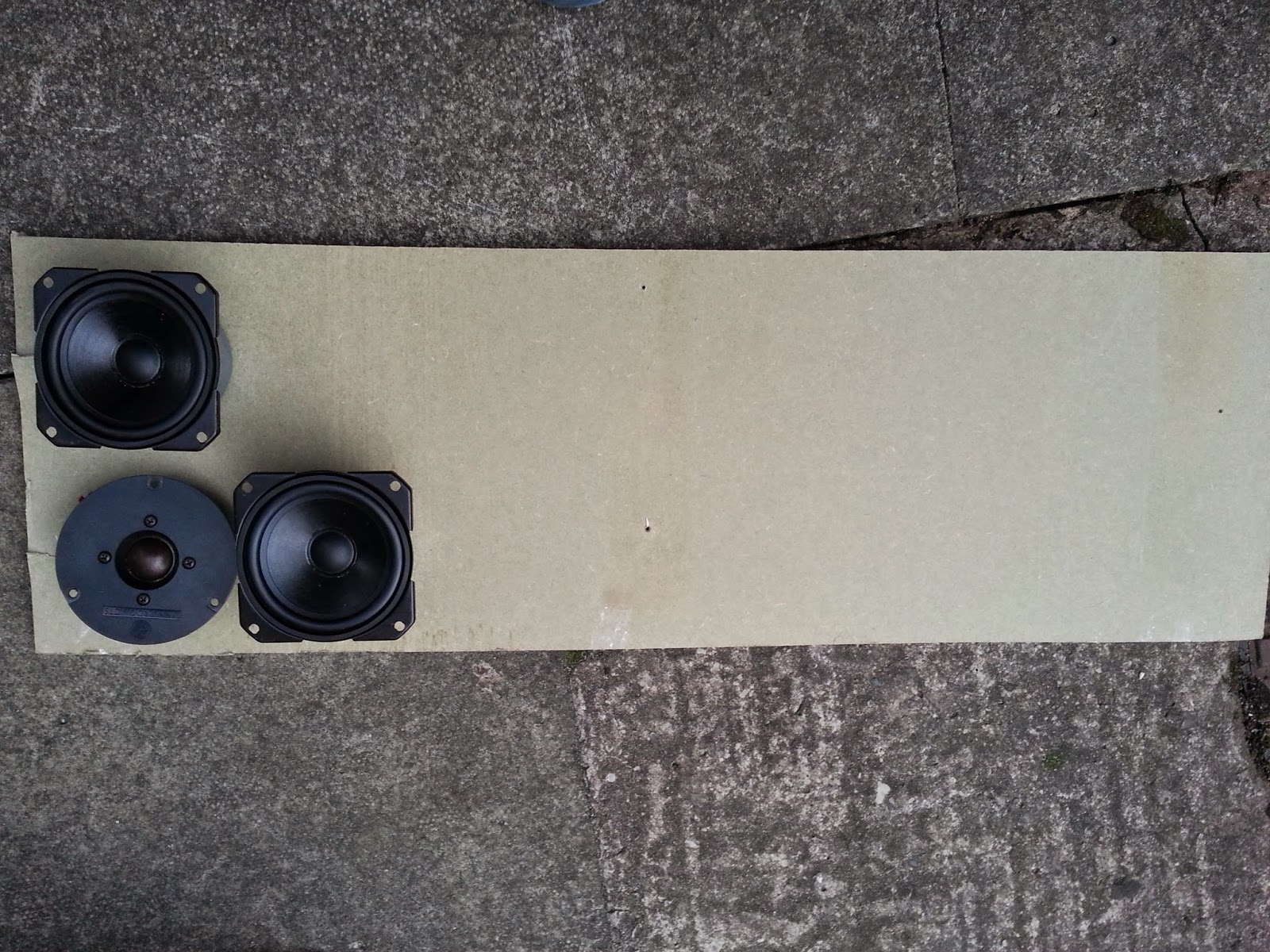 Imagine that there's this config at each end of the board - as a mirrored layout.  I'll ask around on the forums now to find out if anyone has any opinions on which layout will work best.  Imaging will be difficult in such a small space, but that's what I'd like to optimise - might just have to cut the scrap boards and give each a try.

Posted by Neil Hallworth at 08:56 No comments:

Home From Home At The Pub - Spiritland

A visit to a "temporary takeover" club tonight, deep in the heart of achingly hip Shoreditch, East London.

Thanks to hifiwigwam.com, my attention was brought to the transformation of a East London pub into a music listening venue.  Kind of DJs without a dance floor.  Or "my favourite tunes".  But to differentiate itself, this 3 month "takeover" night uses hifi modified Technics turntables, valve amps and massive Tannoy speakers.  Intriguing.

On the way, I called in at the The Book Club Bar on Leonard Street for a veggie platter. Good grub,  interesting decor.
So the transformed pub lounge is at the Merchants Tavern on Charlotte Road, just around the corner from The Book Club.  It's blessed with a high ceiling and almost floor to ceiling front windows.  As you enter the central door, there's a U-shaped (predominantly cocktail) bar on the right, the restaurant straight ahead across the back of the building and the lounge area to the left.  The decor is robust and wooden.  The lounge area a mix of comfy chairs and tables & chairs somewhat more cafe-like. There's a wood burning stove at the back of the lounge.
Tonight the place is surprisingly busy for a Tuesday evening.  Pretty much every chair is occupied and the restaurant looks like its generating brisk business too.  There's a buzz, but its of relaxed chat rather than anything raucous.  This is not a place where you need to shout to your mates to be heard.

Straight to the bar of course - there's a cocktail menu, which seems to be the favourite style of drink here, only 3 electrically pumped beers and lots of choice of stuff in bottles.  Beer is £4.90 a pint, cocktails from £8.50, wine from £5 a glass and Scottish malt from £6 to £40. So, pretty much normal London pub prices really - there's no entrance fee.  The bar staff are friendly and helpful, but the bar would be significantly enhanced by a selection of traditional ales.  I choose a Pilsner and settle down at the end of the bar on a high stool to check out the view of the lounge area and the main attraction - the music system.

The customers in the lounge are a mix of 20 to 35 years olds in the main, with a smattering of olders such as myself.  The music system is arranged across the back wall of the lounge and there's no missing those imposing Tannoy speakers.  The music is on pretty quietly, so really the system is not being shown off.  The DJs are choosing their vinyl and playing what they want to play.  Every night is themed and the schedule can be found on the www.spiritland.club website.  Tonight its mainly folk and ethereal type stuff, including some of medieval style tracks.  The DJs are helpfully placing the album covers on a stand so you know what's playing.  There's no dance floor, there's no banter from the DJs, its about the music.

Around the back of the decks is the resident vinyl collection, supplemented by the DJs' own records. 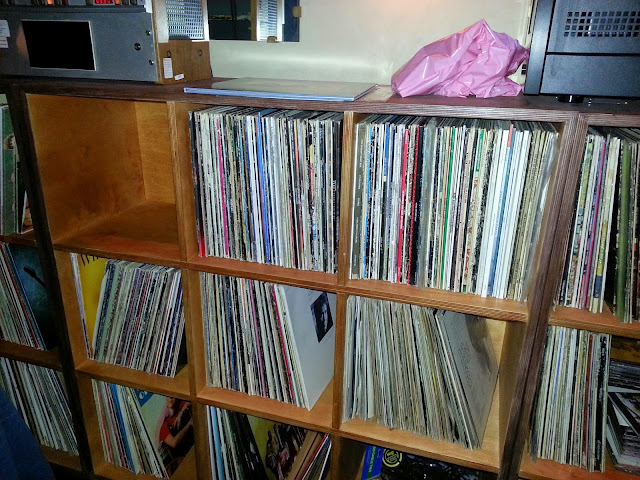 Tonight, the DJ pairing is Will Hodgkinson, rock & pop critic at The Times and Julian Mash.  I don't think they used the pair of broadcast standard CD players whilst I was there, preferring to get their hands on the modified Technics turntables - sporting Isonoe modifications including the tonearms which look like they're based on the very popular Rega products.

The decks fed into a mixer which passes the signal along to a fine looking pair of Canary valve amps, given pride of place on top of the vinyl racks - these have been supplied by www.definitiveaudio.com

The Tannoy Westminster GR speakers finished the system off - and its a good job that the pub is spacious!  A kit list here.
Being very restrained, and appropriate to the type of music being played tonight, the system was on pretty quietly to allow the punters to chat rather than shout.  The volume seems to be inversely proportional to the number of customers - as the bar thinned out, so the volume became louder. But it was never loud.

How did all this sound?  Well, that's a tough one to answer - other than to say it was super smooth with no edges nor reasons to wince.  I'm not really a fan of the big Tannoys - I've heard various variants over the years and they always seem to be smooth and slightly over polite - to the point of lacking excitement.  But its not fair to draw conclusions here tonight on this system - its too noisy in the room, and the music choice is deliberately low key and laid back.  Pleasant enough sounds a bit like faint praise, but it isn't meant that way - it was entirely appropriate to tonight's music, tonight's customers and the vibe in the venue.  Hopefully one of my subsequent visits will demonstrate the Tannoys in a different light - it will depend on the music and the willingness of the audience to "crank it up a little".

I had a quick chat with Will about the concept of the "club" and he suggested that the promoter might like some feedback - so we were introduced.  Paul Noble is an ex-BBC radio producer, really nice bloke, and now a club promoter with a difference - a focus on high quality music reproduction.  His day job is with www.monocle.com, looking after music consultancy for a number of well known brands.  Paul introduces himself - he's Creative Director at Spiritland - with the above history / background and explains that the idea for Spiritland came from his love of music, hearing it well produced, his personal audiophile journey and the lack of anything similar - I'm guessing he's creating the kind of venue and vibe he'd enjoy when choosing a venue for a night out.  Music will range across jazz, folk, classic rock, soul, funk and more from the past 60 years.
We talk a little about hifi - audiophilemusings.co.uk, hifiwigwam.com and my own system,   preferences for vinyl vs CD vs streaming and such. Looks like Paul will be planning to visit The Hifi Show next year if he can make it.  Paul's clearly very enthusiastic about what he's created here at the Merchants Tavern and he has both an impressive and eclectic line up of music and DJs planned over the next couple of months.  Its a mix of friends, personal favourites and willing volunteers that form the line up, including the likes of Franz Ferdinand and Hot Chip.  Future spinners include a label A&R guy, producers, DJs, band members, Radio 3 presenter and an immersive night of Prince's music.
The club at the Merchants is a taster / trial / trail of the future plan - a members club in a more central part of London with a restaurant, bar and lounge.  The common theme across the 3 rooms will be high quality music playing through high quality systems - with the volume appropriate to each room. The bar will likely be the chatting room with the lounge more focussed on listening to the music with the focus on the best system in the house.  We muse a bit on the idea of a headphone bar - playing the same music as that in the room - but with different brands and models to be trialled.  Perhaps there will be "guest systems" in one of the rooms too.

I wish Paul well with his venture.  Its something different, refreshing and deserves to succeed.  I've got an easy choice of venue when down in London on business now - Spiritland will be my default evening of choice during its 3 month run.