Published here mainly for the interest of the Linn forum user community.  Published with the kind permission of Noel Keywood at HiFi World.

Click on the image, then right click and "view image" to see the pages in high resolution.

My own thoughts on listening to Komris are here: http://audiophilemusings.blogspot.co.uk/2014/02/a-view-from-top.html 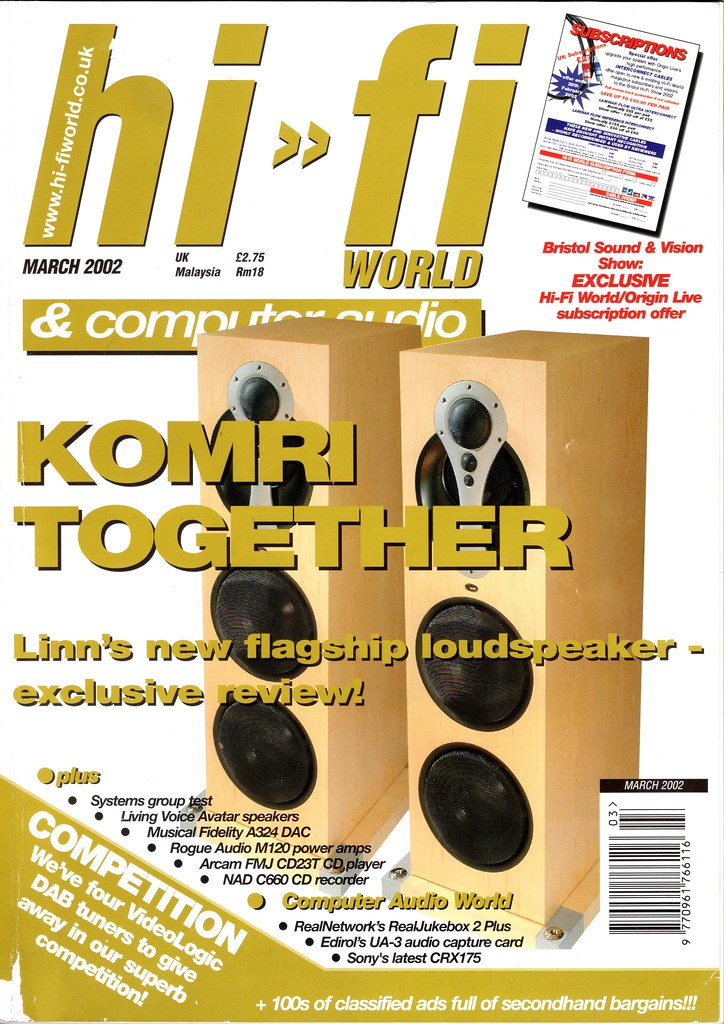 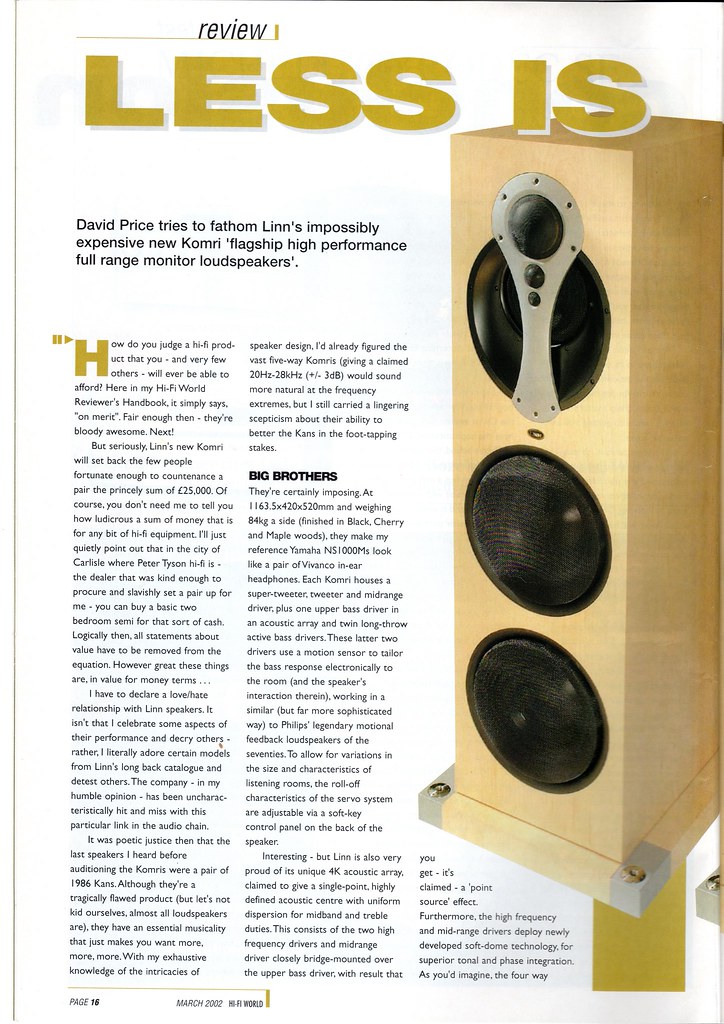 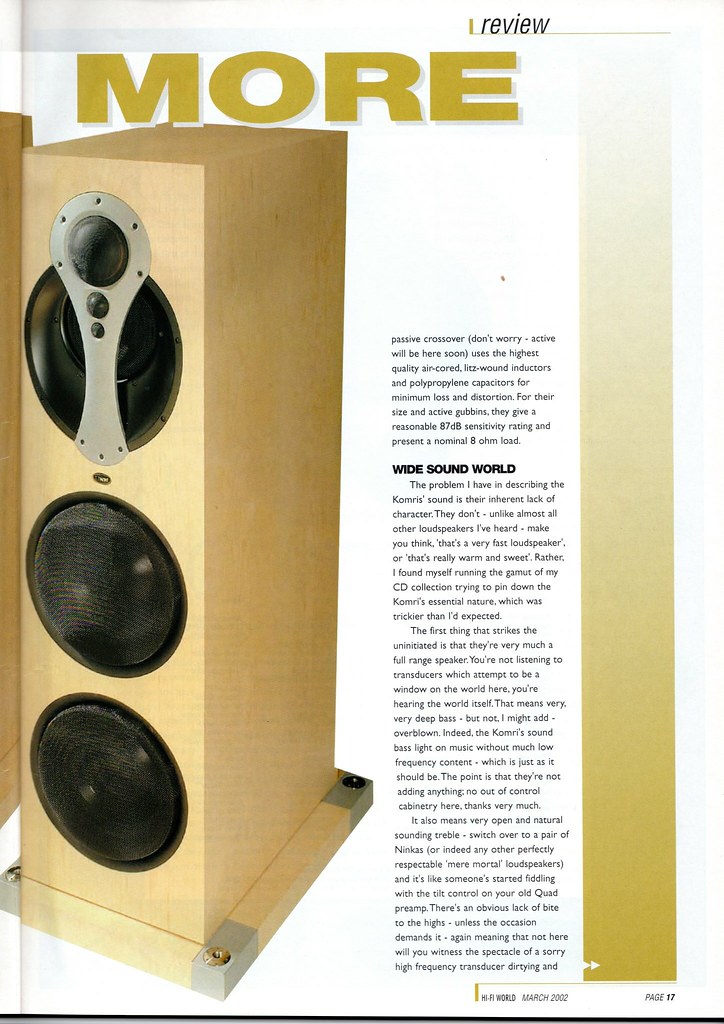 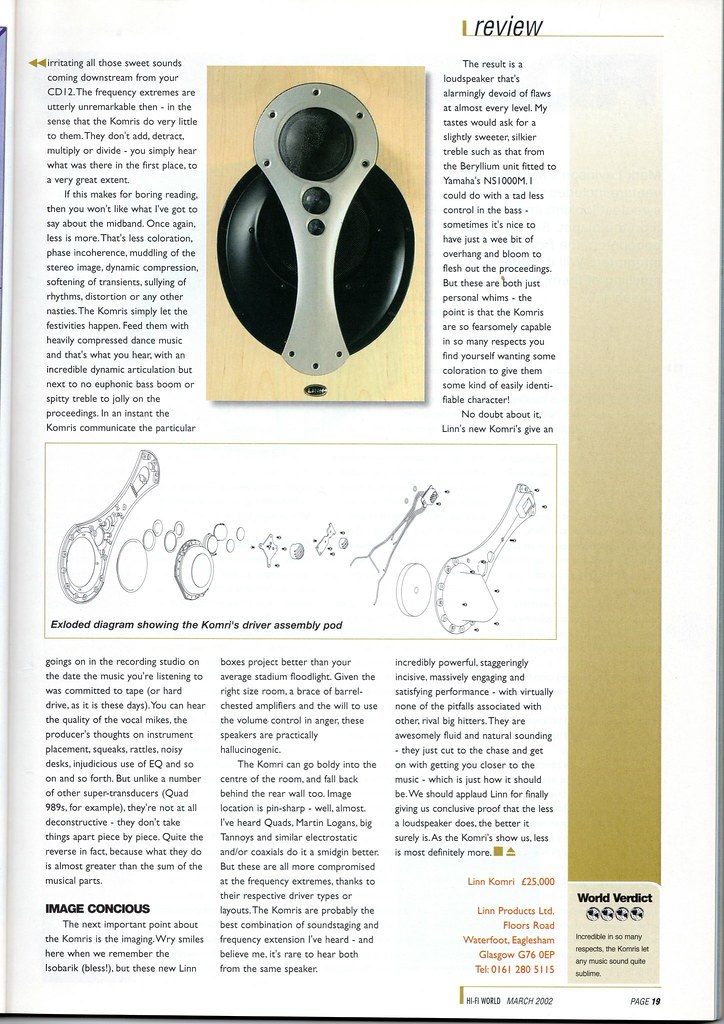 Posted by Neil Hallworth at 01:53 No comments:

Exaktbox Comparison. Something to Consider When Choosing Which Exaktbox To Use: Stereo or Dual-Mono?


EDIT, 2018:  PLEASE NOTE THAT THIS POST WAS WRITTEN PRIOR TO THE /1 UPGRADES FOR AKURATE AND KLIMAX EXAKTBOXES - THE "KATALYST" VERSIONS.  THE FOLLOWING ARTICLE RELATES TO /0 EXAKTBOXES AND IS NOT RELEVANT TO /1 EXAKTBOXES

How exact is Exakt?  Well, you’d think, from the branding, that it would be as exact as Linn could make it.  A recent online “conversation” revealed that all is not exactly as it might seem.  And its all down to processing power.

A quick review of Exakt – it’s Linn specific set of processes in the digital world that changes the signal being fed to a digital to analogue converter (DAC) specific to each driver in the speakers to allow the sound coming out of that driver to correct for room nodes (like boominess), for manufacturing tolerances (in the higher range of Linn speakers), time for the signal to travel to the listening position, to make sure that driver only gets the part of the frequency range particular to that driver, to correct for phase alignment issues between drive units at the crossover point and to correct for phase errors within the drive unit itself.  All very much in real time (it takes about 45ms).  Clever stuff.  But that takes a fair amount of processing power, something that happens inside a Linn Exaktbox which takes a feed from the Linn digital streamer / pre-amp, does all that processing and feeds the signal to multiple DACs – one per speaker driver – which then feeds to the power amp per driver and then onto the speaker driver.

So all of the above, applied to a pair of speakers that have 3 drivers per speaker (known as 3-way), requires 6 channels of processing and DACs.  As this is a particularly good “use case” to illustrate the differences between stereo filters and dual-mono filters, that’s what I’ll step through in this post.

Linn make an Exaktbox that has 6 channels (in fact, there are 2 of these, one at Akurate level, the other at Klimax level).  So, that it makes it very easy to choose an Exaktbox to suit a pair of 3-way speakers right?  3 drivers x 2 speakers = 6 channels.  So Exaktbox 6 (Akurate or Klimax level) will do the job.  Well yes.  And no.  Why not?  Well, we need to take a look at what’s in each of those boxes.  Exakt processing is done in a processor called an FPGA, and the number of FPGAs you get per Exaktbox varies according to which version in use.  Take a look at the diagram below.  On the left, Exaktbox 6 (Akurate or Klimax, for this discussion they’re identical on the Exakt processing side), and on the right the Akurate Exaktbox 10 (actually called Akurate Exaktbox without the 10, but lets not get into branding choices here!).  Clearly, there are 6 DACs in the Exaktbox 6 and 10 DACs in the Exaktbox 10.  But, more crucially for this post, the Exaktbox 6 has 1 Exakt processor, the Exaktbox 10 has 2 Exakt processors.  Note that these diagrams are simplified for the purposes of illustrating this comparison and test (for those who are really interested, in Exaktbox 6 there is a "Master" processor and 1x "Slave" processor, in the Exaktbox 10 there is a "Master" processor and 2x "Slave" processors). 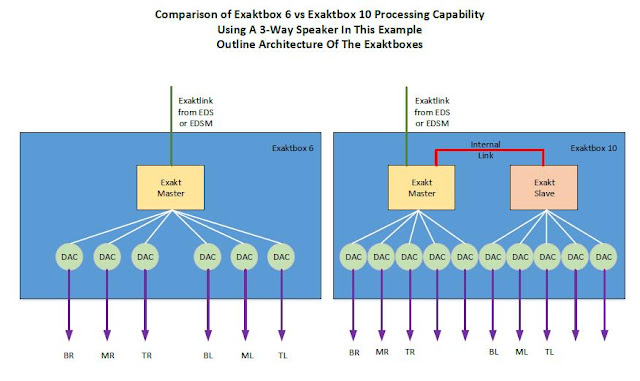 Now, the Exaktbox 10 has to be capable of running 2 speakers of up to 5 drivers per speaker (5-way).  So, for the sake of argument, lets assume that a 5-way speaker will use 100% of each Exakt processor in the Exaktbox 10.  This might not be true, but it keeps the discussion relatively simple – believe it or not! So, with 2x mono Exakt filters – one mono filter per speaker – both Exakt processors will be fully busy: 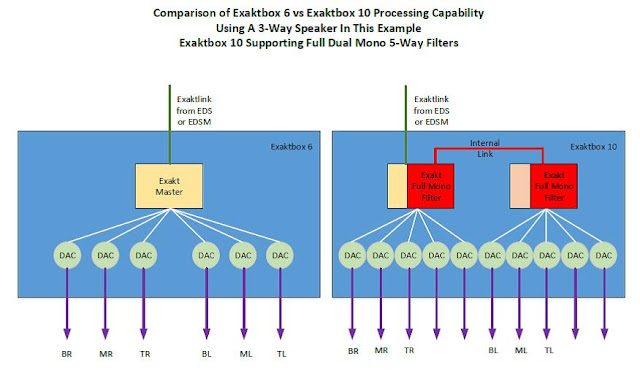 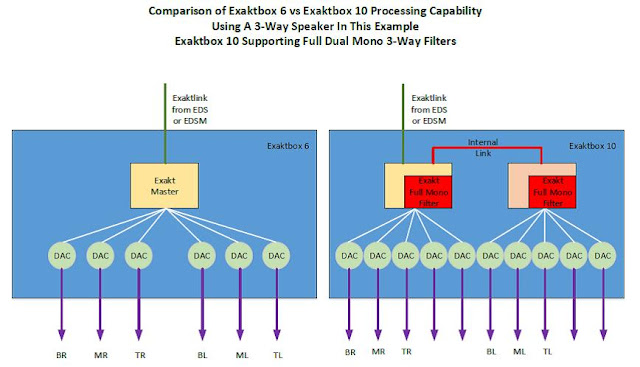 Now, if we take those left and right Exakt filters out of the Exaktbox 10 and put them into the Exaktbox 6’s single Exakt processor, what happens?  Well, it gets a bit over full.  I know these are all approximations and assumptions, but its just to illustrate what’s going on here.  The principle applies, regardless of the precise percentages of capability.  So we then have an Exaktbox 6 single processor that’s too full, you can see here that stacking up the 2x mono filters into the single processor doesn’t fit: 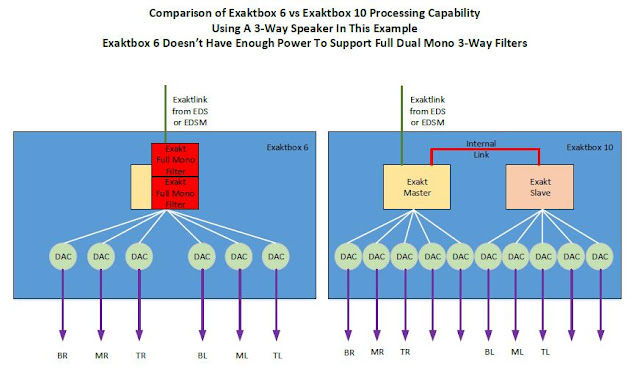 So what to Linn do to make it possible for an Exaktbox 6 to support 2x 3-way full range speakers?  Well, they don’t run the 2x mono filters like the Exaktbox 10, they run a cut-down stereo filter.  In order to achieve this, the stereo filter does less complex (and therefore less accurate) processing so it will squeeze into the space available in a single processor: 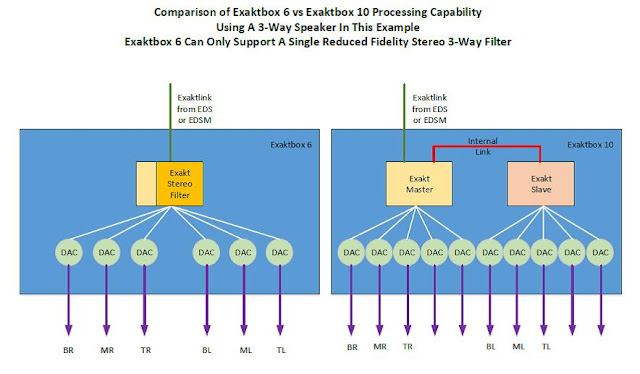 And what does that mean for sound?  Well, it’s less accurate, as you might expect.  Hence, Exakt is sometimes less exact than it might be.

Its taken a while for this experiment to happen in Musings’ listening room.  Why?  Well, it took a while for Linn to get around to releasing the “dual mono” Exakt filters for the PMCs amongst others such as Linn’s own Keilidhs.  So if you were running an Exaktbox 6 or an Exaktbox 10 for PMCs back in May 2016 (like me), then you’d not hear much of a difference between them as they were both running the compromised stereo Exakt filters.  In fact, the Exaktbox 6 sounded slightly better due to the greater space and better circuit layout inside the box.  But this was a small difference and has nothing to do with the Exakt filters in use. 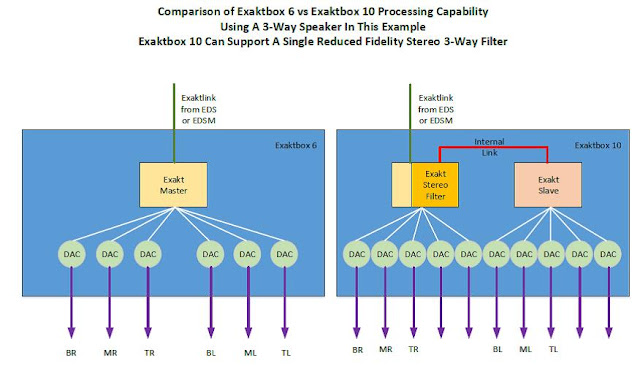 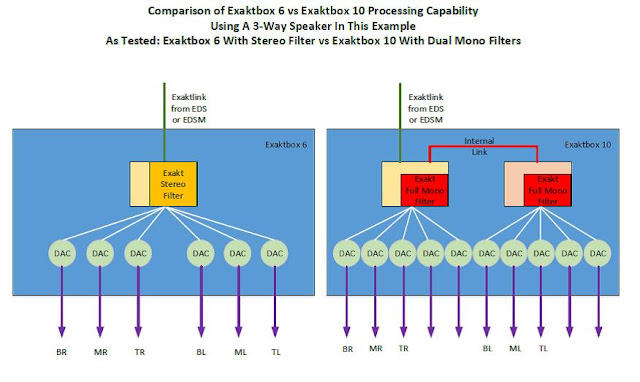 Everything else in the system was kept the same – same Akurate Exakt DSM source, same Chord C-Stream cable for the Exaktlink, same 6x Linn silver interconnects and same 6x channels of Akurate power amplification and speaker cables.  The same SPACE Optmisation settings were applied too, leaving only the stereo vs dual-mono Exakt filters being the only difference between the 2 set ups.  Yes, there’s the better layout of the circuitry in the Exaktbox 6 to allow for, but earlier testing has shown that as being fairly minor (worth having, but not worth trading equipment for, if you already have an Exaktbox 10, IMHO).

Although it takes about 10 minutes to swap all the interconnects over between the 2 boxes (and power up each drive unit one at a time, starting with bass and working up the frequency range to ensure all the connections are correct), its pretty easy to hear the benefits that dual-mono filters bring.  As is often the case, its not that easy to describe, especially given how good the stereo Exakt filters are. But lets say there’s just a lot more of everything without adding any clutter at all.  What you think is very stable imaging, becomes even more stable, wider and deeper too.  What you think is lots of space between and around instruments is a good bit better defined.  Bass appears to go a bit deeper, but room nodes are not excited any more than they were.  Some sounds evolve with even greater texture through the lifetime of a note.  There’s another improvement in the flow and effortlessness of listening to the music and following the tune – without thinking about it.  Are there any downsides?  Not that I’ve noted, its all good.  At least its all good if you don’t think too hard about the financial implications, or the idea that, with even greater processing power in future iterations of Exaktboxes, that there might be yet more to come.  But let’s not go there just now!

So what is the conclusion?  Well, Exakt isn’t always as Exakt as it could be.  And if you’ve got 3-way full range speakers like me, the Exaktbox 6 isn’t necessarily the “lower cost” route it might’ve been, as it involves a level of compromise.  But its also worth saying that the benefit brought by dual mono filters is worth having – if I knew this when starting out with Exakt, I would’ve saved up for the Exaktbox 10 over the Exaktbox 6.  It just so happened that the ex-dem Exaktbox available to me was the 10 channel version and it was part of the purchasing choice for a different reason – the option to go to the 5-way Akubariks, had I wanted to do that at some point in the future.  What does that mean for choosing an Exaktbox for other systems?  Well here’s the run down, as it stands at the time of writing, for a stereo pair of speakers:

I like the effects of dual-mono filters in the Exaktbox 10 and will be sticking with them for the time being.  I was very happy with the system before the move to dual-mono, its just a very substantial layer of icing on my system cake!  I’m off to consume another slice…

FYI, for those systems using speakers with built-in Exakt processing and power amps, none of the above applies – this is because each speaker has its own Exakt processor on board and therefore, by definition, are running a mono filter each.

Posted by Neil Hallworth at 01:32 No comments: