For those of you paying attention, the streaming set up currently looks like this:
QNAP NAS (including SqueezeServer software) - Etnernet over mains - Logitech Squeezebox Touch - QED Performance Digital Coax cable - Cambridge Audio DACMagic - Audioquest Emerald analogue interconnect - Meridian 541 pre-amp and then off into the active amps and Linn Keilidhs.

And very satisfying it is too - as I've said earlier, about 90% up there with the CD player, and definitely better with 24 bit tracks.  But there's always that nagging doubt eh?

Now some sites (e.g. Stereophile, Digital Audio Blog) have been making some seriously big claims for the capability of the Logitech Squeezebox Touch - such as "the best transport I've ever heard (Digital Audio Blog on the Touch with a Teddy PSU)".  This means they've been running the humble Touch with some multi $k DACs and stratospherically expensive amps and speakers.

I am, by nature, somewhat sceptical of such claims and what sometime seems to by hyperbole.  Now I'm not singling out Stereophile nor Digital Audio Blog or questioning their integrity, it just that I like to see lots of evidence and corroboration, or better still, find out for myself.

Another thing that's a worthwhile background to this post is my continuing good natured sibling "rivalry" with my brother when it comes to hifi and the route to getting the most enjoyable sound in the home.  Brother J has gone down a different route to myself, (although we initially shared an enjoyment of Meridian CD players, with J running a 206 for many years.  After a few years with Meridian CD / Cyrus 2 / PSX and Mission 770 Freedoms (the last of the 770 line) he's recently upgraded to a Cyrus 4 box CD player (I can't remember the transport model, but the other three boxes are DAC X and 2 PSX-Rs) plus a reasonably high end Cyrus integrated.  This has substantially improved his whole system and it suits his taste - its fast, has pin-point imaging and real clarity and separation.  But for me, it doesn't go deep enough, the music lacks somewhat in emotion and doesn't "envelope" the listener.  Its all silver too, which just isn't right ;-) Each to his own of course, and it delivers what he wants to hear.  This means he finds my system to be somewhat vague in its imaging (can't argue with that) and a little less analytical than he would enjoy.  Fair enough.  Will do a feature on the "other systems I have known" page sometime soon.

Why is this relevant?  Well, in amongst J's kit list you might have spotted a somewhat fine DAC combination of Cyrus DAC X and PSX-R.  This half term (this is a very late post, apologies!), J came to visit with family and had kindly agreed to bring along said DAC and power supply.  It's good to unplug and re-connect cables every now and then, make sure the connections are clean!  And so began a "quick trial" session - we reckoned an hour would be enough...

For purposes of this session, we used exclusively 16 bit 44.1 kHz FLAC files ripped from my CD collection - so we could make direct comparison with my Meridian 508.20 CD player.
Music used:

Thea Gilmore - Loft Music - Tracks "Ever Fallen In Love" and "The Old Laughing Lady" (A great covers album - with Thea its all about her extraordinary voice - its range and ability to convey emotions, plus the acoustic instruments and backing vocals)
Brendan Perry - Eye of the Hunter - Track "Death Will Be My Bride" (Don't listen if you're feeling a bit down!  Very well recorded and spacious track with some really tricky and complex cymbals to deal with)
Eagle Eye Cherry - Desireless - Track "Shooting Up In Vain" (Another one to cheer you up! Mutilayered instruments that need a good system to allow each instrument to survive in the complexity of the mix)
Chris Rea - The Road to Hell - Track "Looking for a Rainbow" (needs a system that has good drive and pace as the song builds the underlying rythmn throughout)
Eddi Reader - Eddi Reader - Track "Dear John" (lovely voice, needs to convey the emotions)
FAC 15 - On Fierce Angel's Angels Fall 3 CD Set "Stay With Me Till Dawn" (a superb re-work of the Judie Tzuke classic with a bass line that slides into the depths of the unknown!)

To get a reference and to demo the DACMagic to J we started off using the Thea Gilmore album to play the Touch with its internal DAC and then stepped up to the DACMagic.  J's view largely aligned with mine - a massive improvement somewhat out of kilter with this modestly priced most looking little black box.  Comparing to the CD player there are aspects of the music that are different but we couldn't really choose between Touch / DAC and the CD player.  CD being warmer, Touch being a bit more up-front.  Tried Eagle Eye and Chris Rea on this too, with similar indecision.

So the Cyrus DAC X is unpacked and plugged in to the system.  It sits on an Isoplat and takes the place of the DACMagic in support of the Touch for the streaming side of the system.  What follows is somewhat of a revelation.  Usually, when you get to this stage with hifi, the improvements in the system deminish, the more you spend on the system.  One day I'll post in depth on the benefits of going from passive amplification to active amplification with the Linn Keilidhs which was the biggest single improvement I've made in my system.  Until now.  For those of you who've had the benefit of listening to a Linn or Naim system that has been moved from passive to active, you'll know just how fundamental a change this Cyrus shoebox has brought to the system. 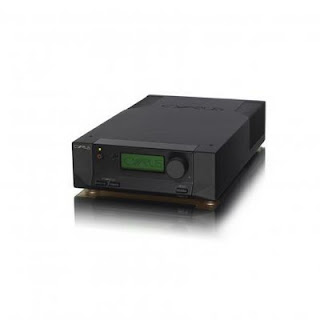 Some examples of what we heard:
- The music appears to be playing slower (but it takes the same length of time to play the track) this would seem to be because the instruments and/or notes aren't slurring into each other, they've got time and room to be notes in their own right
- One of the tracks (can't remember which one) has a riff played on an acoustic guitar.  As the track progresses and more joins the mix, the guitar continues in the background.  But we were both astonished to hear (and we both spotted this at exactly the same moment, without discussion) that part way through the track the guitar changes from acoustic to steel.
- The Brendan Perry track finishes with a very complex and subtle cymbal sequence.  Now, the difference between the sound of each cymbal is much more obvious, but on top of that, you can hear if the stick is striking the top or the edge of the cymbal and when being brushed, if the brushing is being done by a brush or by a stick.
- The soundstage on all tracks is outside the speakers and with the FAC15 track, fills out into the room.

So we were VERY impressed with this and messed about with a few tracks for another hour or so.  Then outcame the Cyrus PSX-R to sit alongside the DAC-X.  You need to keep both the DAC and the PSX-R plugged into the mains then there's an umbilical chord from the PSX-R to the DAC.  I understand that the internal power supply of the DAC is then dedicated to digital duties and the PSX-R takes over the analogue output circuits.

So what now?  Well this is another non-subtle improvement.  Darkness behind and around instruments, bass is deeper and more controlled (check the sliding synth bass line on the FAC15 track) and those Brendan Perry cymbals shimmer out and away from the speakers, seeming to sit in the room.  FAC15 are now enveloping the whole room.  Its lush, detailed and completely captivating.  And so the quick listening session went on for 3.5 hours.  We didn't want to stop trying different tracks.  Later in the evening, the system seemed to have matured again - I know many experience this with their systems and there is much debate about noise on the mains. physcological effects and many other theories. Perhaps this would've happened anyway, but we did suspect that the PSX-R might have warmed through a little?

We, rather indulgently, spent another couple of hours of listening the following day, throwing in some 24bit stuff from Linn and HDTracks, which, of course, was mighty impressive, if, at times, a little dry.  No problems with Ian Shaw's "Barangrill" (on "Drawn To All Things" from Linn Records) nor with Steely Dan's "Hey Nineteen" (on Gaucho from HDTracks).

And then J and his Cyrus kit went away again.  Sad.  But one thing has definitely been proven - the little Squeezebox Touch is certainly capable of supporting some very serious downstream electronics.  Now to eBay...
Posted by Neil Hallworth at 12:15