A View From The Top?

Where is the top?  Well, if I climb Moel Famau a few miles from home I'm pretty sure I know when I've got to the top of that particular hill.  It has a small pseudo castle on top and the views from there across the Clwydian hills are either spectacular, or invisible, depending up on the weather.


But, in audio terms, where exactly is the top?

You'll know that my system is heavily Linn, and until Q4 last year (2013), the top in Linn terms would've been Klimax DS/1, Klimax Kontrol/2, Klimax Tunebox crossovers, 8 Klimax Solo mono power amps and Klimax 350p speakers.  That lot adds up to about £93k, give or take.  Add cables and that gets you to about £95k.  You'd think that'd be pretty near the top wouldn't you.  But rather like those hill walks you go on that have a number of false summits, there's still a whole bunch more money you could spend on audio gear, should you have the means and the inclination.  By way of example, on 7 January 2014 at CES in the US, Naim Audio launched a new pre-amp and 2 x mono-block powers amps.  This "Statement" amp is listed at $120k.  So it would be fairly easy (on a price list browsing basis, not on an affordability basis) to build a system in excess of £300k.  Yet another (probably false) summit. Probably.

Now Linn introduces the Klimax Exakt DS and 350 speaker combination for £50k.  But Exakt can be had as a Tunebox too, feeding Solo power amps into 350 speakers, or the older Komri speaker, or the even older Keltik speaker.  With more options to come soon. Exakt, Solos and 350p are probably in the region of £90k too.

Which brings me to the subject of this review.  Sort of.  Because regardless of Exakt, or not, I don't consider the Klimax 350 speaker (in passive or active form), Linn's current top of the price list speaker as either their most musical current speaker (that's the Akubarik) nor their finest achievement to date.  For me, their finest achievement to date goes to the long discontinued Komri.  Last seen at £32k list price, they were superseded by the 350 around 5 or 6 years ago.  I've heard them a couple of times before.  The most recent was on one of my earliest visits to the House of Linn when they were being driven by a top of the line LP12 and the original Klimax DS with 4 Klimax Twin stereo power amps.

I've never heard a pair of Linn Klimax 350 speakers come close to the enjoyment provided by that system including the Komris.  Even Exakt 350s.

But then an invitation arrived, a bit out of the blue, on the Linn forum.  I'd been in touch with Pablo before, as I knew he lived only 15 miles or so from home and that he had a pretty good Linn system.  We'd agreed to meet up sometime, but never really got around to it.  But then this latest communication said that Pablo was expecting his Klimax Exakt DSM and Komri Exakt Tuneboxes to arrive just before Christmas, and would I like to go for a listen?  That's not really a tough one to answer and we soon sorted out a time, slotting into the holiday period between Christmas and New Year.  The time also worked for another forum member "To Be A Rock And Not A Roll" (referred to as Rock from here onwards) so we were set for a small forum get together o give these Exakt Komris a listen.

After a bit of a challenge finding Pablo's lair (its hidden down a side road in what used to be the neighbour's back garden), we settled in with a cuppa to some tracks.  Rock already had some Pink Floyd playing, but it wasn't one of my favourite albums and tends to the harsh.  Pablo went to load up some tracks I'd brought with me and we got going.  The first thing I noticed, and we discussed, is just how tidy Pablo's system is - all you can see is the Komris - there are no electronics in the room.  There are wide pipes buried into the walls through which the 2 x K400 speaker cables and 1 x Linn Silver balanced interconnects per speaker disappear.  These are connected to the 8 x Klimax Solo/Dynamik mono power amps and Exakt Komri Tuneboxes up in the loft space and in turn the Tuneboxes are connected by Exakt Links down to the Klimax Exakt DS in the dining room, just behind the wall where the speakers are located.  This is all super neat, but I can't help thinking that personally, I'd really like to see all that beautifully crafted Klimax hardware out in the open, something a bit like this:

As it is, this is what you see in Pablo's listening room, just the cherry veneered Komris: 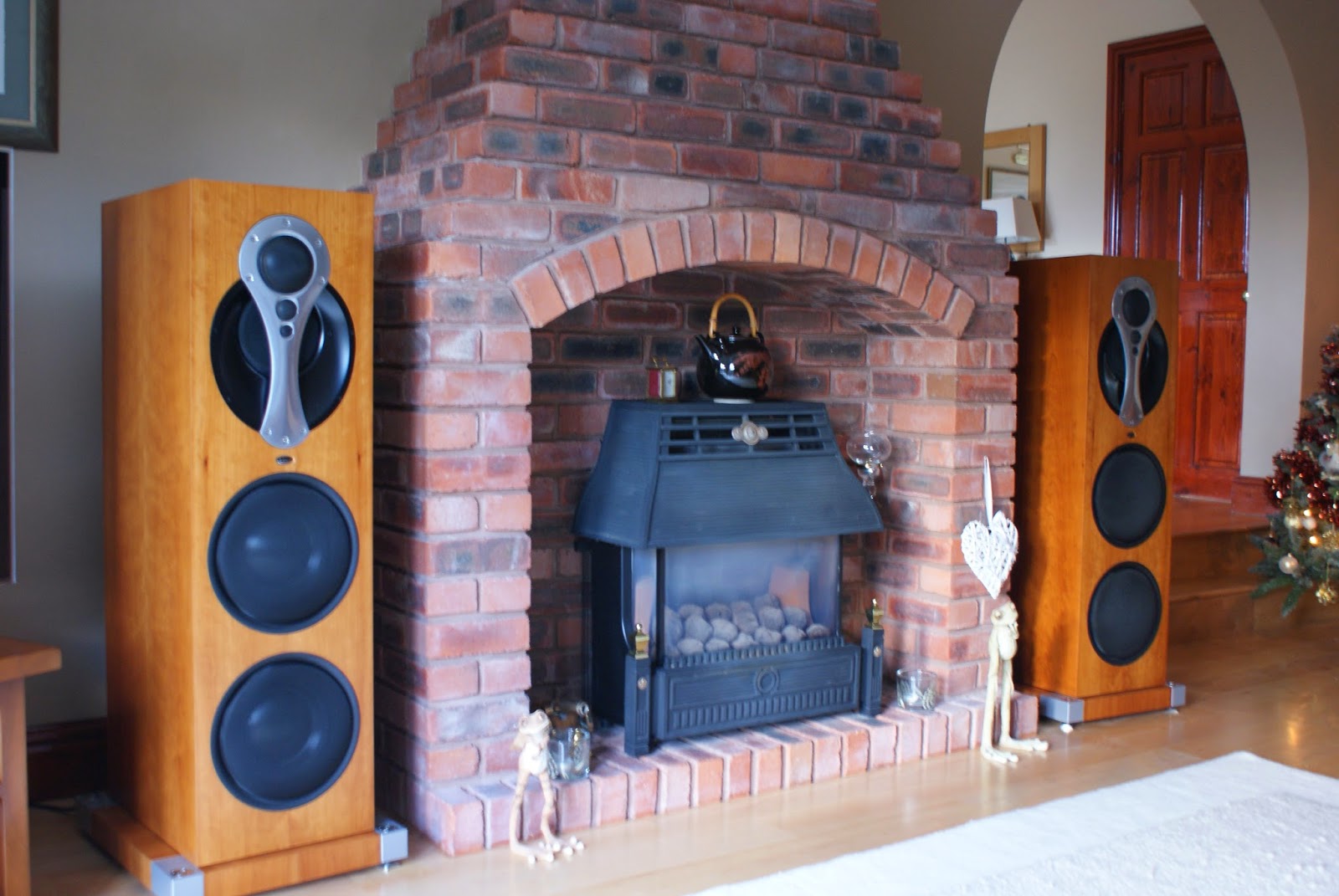 So how does all this lot sound?  Well, there's absolutely no doubt in my mind that this is the top of the hill for an all-Linn system.  The 350 Exakt is just not in the same league as the Komris.  Apparently production was stopped due to some difficult to source parts.  That's a shame because they really are a big step up from the 350 - there is no doubt about what they're doing with the music - no hint of that strangely disconnected bass in the 350.  The first thing that struck me was the masses of detail in the upper ranges - but this has no hint whatsoever of being "in your face" or at all aggressive - its sweet, smooth and sparkly, all at the same time.  What's more, it doesn't seem to originate from the speakers at all - instruments hanging in space, rock steady in location, regardless of what else comes along in the music.  Vocals are outstanding too - there's so much expression, nuance and feeling in what we're hearing and this system doesn't favour male over female or vice-versa, its all there in spades.

What about the weight and dynamics?  Well, whatever you want is there without being overwhelming.  I find it very difficult to describe very weightly, deep deep deep and super solid in nature but not hung over, no boom etc.  Its an amazing mix of capabilities.  So often I read about oodles of boominess and swamping bass or hear it in some systems, but this is completely different to that.  Its hard to comprehend that so much complexity and so many rhythms are hidden in those bass lines from the likes of Yello and Trentemoller.  But here they all are - and fully part of the complete make-up and flow of the music.  How to describe instruments that stand so clearly apart and distinct yet they're so much part of the emotional presentation of a tune?  I don't know, but here it all happens.

We chat for a while then play some more tunes.  Rock and I are constantly smiling, shaking heads and tapping our feet.  We're both wrapped up in the music and we're both late to leave as its so difficult to drag ourselves away from what this system is doing.  We try and describe what we're hearing but (as you'll see above) its really difficult to describe.  We eventually settle on a feeling (note that its a feeling, not a technical description) of completely effortless presentation of music, flow and emotion.  Stunningly effortless.

There, that's the verdict.  I'm not sure here if we're at the top of the hifi hill - perhaps Pablo's system is another of those false summits, but there's no doubt that this is my new reference.  When I think back to some of the frankly music-free and un-enjoyable high-end systems I've heard at hifi shows that cost as much and more than this system (including a pair of speakers alone that cost 50% more than this complete system and were incapable of carrying any musical emotion), its great to know that there is something truly high end that can really play music.  Komri's aren't for me - they need a bigger room in which to work, but if I had that kind of cash and a room to put them in, they'd be worth seeking out.  And great that Linn continues to support its customers who have made such an investment in their products - offering their latest Exakt system approach to work with these out of production speakers.

So there we have it.  Great to meet Rock and many thanks to Pablo for his hospitality.  We've been invited back - there's no doubt that's an invitation I'll be keen to follow up. 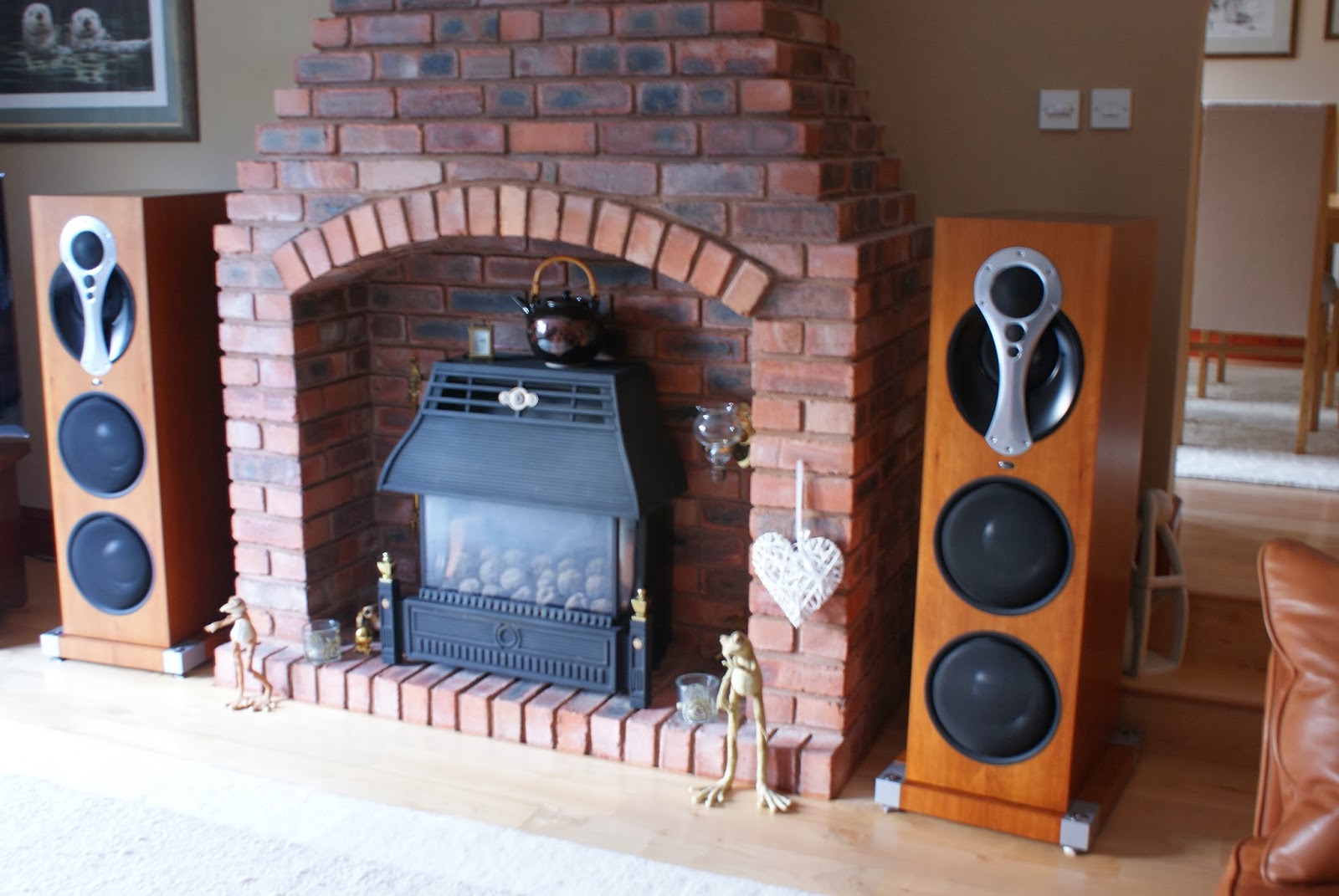