I Feel For You, Chaka

Chaka Khan. A blast from my 80s past and one of my first 12" singles, no doubt annoying my parents as it blasted out from my Thorens / Mayware / Nagaoka / NAD / Mission bedroom combo.

And there it is again, playing on vinyl and valves in a London pub. Beer to hand is a bit different this time. Back when I bought my first system on proceeds from my college part time job at Fine Fare there was no beer to be seen at the age of 17. Honest.

So a second visit to Spiritland.com in Shoreditch. The pub with hifi and a different music theme every night.  Last time was bonfire night, a subdued evening of folk and ethereal stuff which kind of suggested the early onset of drunkeness,  even when sober - a bit trippy in a gently olde worlde kind of way.  The audience was equally subdued. Chilled rather than cool, comfortable and vaguely familiar whilst been strangers. Maybe the evening was a bit like borrowing someone else's old but comfortable slippers for  few hours.

Tonight, I should've brought my baseball cap. To wear sideways. Or backwardz. But probably best not to. Mutton dressed as lamb and all that.  So as you can see from the post title, tonight is much more lively.  A contrast and probably an excellent way to show exactly how Spiritland hopes to do something different and to offer either choice, or the opportunity to widen perspectives and broadend musical tastes. You choose.

Who's tonight's guest vinyl spinner? Young Guru, who has been Jay-Z's DJ since 1999. So kind of well known without many folks knowing him at all. DJs tend to be out of the limelight with that kind of artist, but I'm sure those in the know are well aware of him.

Things are a little louder tonight, suiting the much younger audience in baggy Ts and ripped jeans. But its still not loud and conversation is possible if you raise your voice.  The music is mainly disco and dance oriented with some fusion and jazz funk here and there. I walk into the pub to the theme tune to Starsky and Hutch.  Unfortunately I've left my massive knitted cream cardigan at home, and I've never really been a fan of the wallowy old Ford Torino. Even with a white Nike stripe...

So another, but again very enjoyable couple of hours in Spiritland.  A very different place to my last visit.  And yet, one and the same place. A place of quality music, quality sounds and an amiable atmosphere.   For someone as old as I'm getting, that counts as cool ;-) 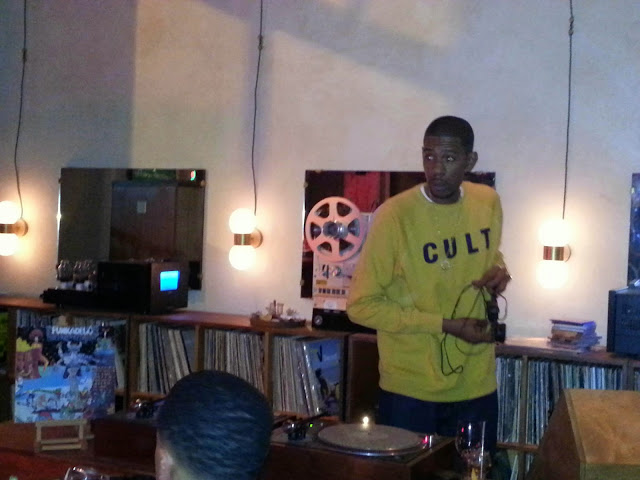