Part One of the Review Is Here

EDITED 30 September 2016:  The official Linn conversion kit for the PMCs are now available from Linn dealers - there's now no need to convert DIY as per the described below - although the official kit still requires much of the same actions :)  Note that the PMC warranty will still be voided by the Linn kit.

After conversations with Linn about the timing of the conversion kit launch which is still not clear, back in April it was time to take the plunge.  So here's what is involved in the conversion from standard Twenty.26 to an Exakt compatible version. To be fair, this conversion could be done for any project to convert the PMCs to any form of active operation, it is not specific to Exakt.

FIRST AND MOST IMPORTANT: THIS CONVERSION WAS DIY AND IS NOT APPROVED BY LINN NOR BY PMC. THIS CONVERSION WILL INVALIDATE THE WARRANTY ON THE SPEAKERS. THIS IS NOT A COMPREHENSIVE GUIDE, IT IS NOT INTENDED AS A SET OF INSTRUCTIONS.  ANY FOLLOWING OF THESE STEPS IS ENTIRELY AT THE RISK OF THE PERSON MAKING THE CONVERSION. THERE MAY BE ERRORS OR STEPS MISSING. NO ACCURACY NOR COMPLETENESS CAN BE IMPLIED. YOU HAVE BEEN WARNED!

The basic principle here is to remove all electronics that sit between the rear terminals and the drive units in the speaker. Fortunately, PMC have provided the .26 with pairs of terminals for each individual driver unit within the speakers. This is intended for bi-amp or tri-amp operation of the speakers, still in passive mode.  Exakt needs a direct connection to each drive unit within the speaker, so the 3x pairs helps considerably in this conversion. The latest Twenty5.26 from PMC has reverted to a single pair of terminals and uses a metal panel, so would be considerably more work to convert. The plan was to make the conversion reversible, so making as few modifications as possible whilst still achieving the objective.

Dismantling and Removing The Passive Crossover

At this point, all the passive crossover components have been removed.  The speaker cables that go from the passive crossover to the drivers have female spade terminals, but they now need to be connected to the back of the cylindrical terminal posts.  It would be easy enough to just cut off the female spades and solder on some loop terminals, but that would make the conversion back to standard passive more complex and that was something that was to be kept as straightforward and as standard as possible.  This maintains the future resale value of the speakers as there is a much bigger market for standard passive speakers than there is for Linn Exakt compatible speakers.

So a conversion from cylindrical terminal posts to male spades is required.
Parts required are 5mm gold plated loop terminals (its hard to find any of these. So here, 8mm are used ones and they're a little larger than ideal so stanless steel 5mm washers were also used to help with the fit), male gold plated 6mm spade terminals, some solder and tubes of insulation 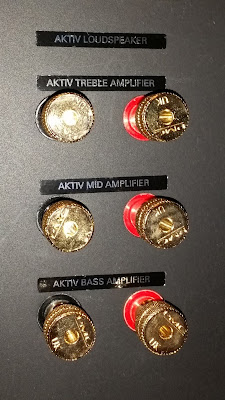 So that was it, all done.  Checked, checked and checked again.  The connection sequence was as follows:

Enjoy the music.  Pack the passive crossovers carefully in bubble wrap and a strong box and store in cool dry place.

Part Three Of The Review Is Here

EDITED 30 September 2016:  The official Linn conversion kit for the PMCs are now available from Linn dealers - there's now no need to convert DIY as per the instructions below - although the official kit still requires much of the same actions :)  Note that the PMC warranty will still be voided by the Linn kit.
Posted by Neil Hallworth at 14:38