At AudiophileMusings there is an almost constant turnover of speakers passing through the place. Sometimes for review, sometimes to consider retro products to find out if they're as good now as they were then, but often due to designing Exakt digital filters for them as part of SpeakerFilters activities.

There's a fair amount of cannibalisation going on too. Pick up some tatty but working speakers, a pair of equivalent, immaculate, but not working speakers and create an immaculate working pair, to keep them going - upcycling perhaps? So sometimes that produces empty but OK cabinets, spare drivers etc.  Usually these are sold as spares, but sometimes a daft idea comes along and a project is born. One of those has been in the making for over 2 years so far...but that one is for another day, month or even year!

This one, however, has been particularly speedy in comparison, with a gestation period of just over 12 months.  There's always something else to listen to, a show to go to, another Exakt design commission to enjoy to delay progress.

Over 3 parts I'll take you through the timeline of this, my first ever completed speaker build and the results.  There's the back of a fag packet involved, some kinda cheating (my woodworking skills are atrocious), the application of some ideas I've had for a while and some drivers that are familiar to many but very familiar to me.  I've chucked some ideas at this that I've not really understood why they're not used more extensively, until I tried to achieve them, and there's some very traditional elements too. And some bodging along the way - so don't expect this to be ultra precise, nor particularly pretty.

A need for some drivers to fix a pair of Linn speakers lead to the purchase of a pair of Linn Index II speakers that were extremely good value for money - being in decent condition and fully working. The mid-bass drivers went to the repair job and the tweeters and crossovers went off to a new home, leaving me with a pair of Kustone stands and a pair of empty Index II cabinets.  Given the relatively low quality of the cabinets themselves - chipboard shells, mdf baffle, vinyl wrap and essentially nothing more, they languished in the corner for a while, under threat of a trip to the local recycling centre.  A different project had left me with some Linn Ninka (040/2) mid-bass drivers in stock too and it seemed a shame not to bring the two together to see if something could be created. 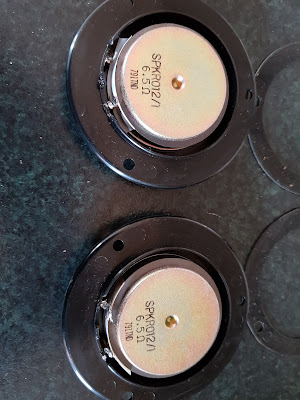 The Index II is around 20 litres in internal volume.  The Ninka, which has 2x mid-bass drivers, is around 40 litres in internal volume. So the availability of a single Ninka driver, with some kind of back of a fag packet logic, in half the volume of the pair of drivers, seemed as though it might just work. Not a sophisticated way of making a decision, but this is a pretty low budget build, so not exactly a lot at risk.

Also sitting around in stock are a pair of Linn 3K arrays - initially I thought about putting these in the mix, but laying the drivers out on cardboard roughly the size of the baffle showed up a couple of things - there wasn't really space, and the traditional way of a 3K overlapping an upper bass or bass driver just isn't possible with the Ninka driver. I was trying to convince myself that the 3K would work, so an extra 4 binding post holes were drilled in the back of each cabinet, but no worries, even though eventually only an extra 2 were required. The obvious thing would be to go with Ninka tweeters - the 038/2 Linn unit is sweet enough, but it didn't seem very adventurous.

So something else would need to be found. Shortly afterwards I saw a post on a forum somewhere about a 2 dome driver array - mid and tweeter - that was extremely good value for money, and remember hearing them in a pair of large floor standing speakers at the Cranage Show a couple of years back.  I remember them being full of detail but without being harsh, edgy nor shouty. A bit of further research revealled that they're not that easy to find, but a pair was soon on its way from Germany to the UK. The HiVi Swan TM1-A is ridiculously good value for money - a couple of sophistcated looking drivers on a very solid all metal chassis.  They come with plenty of information too on their Thiel-Small parameters, recommended crossover points etc.  One thing that appealled was their independence from each other - although they're in the same chassis, they don't have any crossover, they're electrically independent.

Back to the donor cabinets. Now the drivers are chosen, it was pretty obvious that the (pretty substantial) original mdf baffles are no longer of use.  But the Index II is essentially a sealed box, from a cabinet construction point of view - everything being glued together.  So onto the circular table saw they went and the baffle was sliced off, revealling the contruction of the cabinets, which includes a ring type stiffening element. The baffle is rebated and sits partially within the cabinet, partially proud. So the circular saw took away a few millimeters of the side and top panels too.

So this is the basis of the cheating in the project - no need to build the main cabinet element, which, with my very rudimentary woodworking skills, meant a much greater chance of success.  I'm going to play the upcycling card again too! More environmentally friendly this way.


Also lying around in the garage were some pine scraps that were cut down to the correct size and the drivers were laid on to check alignment / positioning.  Plus, I needed to practice with the router - an implement that I've not wielded before, so something new to get to grips with.