Being in London Village on the same evening of the latest Linn Lounge event gave me the opportunity to listen to an Akurate DSM and Akubariks.  Aided by an England game in the World Football Cup thingummy, a ticket was reasonably easy to obtain. Daft Punk were on the menu.

The Kensington Studio is a long term Loewe and B&O dealership and has just opened a Linn section at the rear of their High Street showroom. The room is a sensible size and is something akin to a decent domestic living room. There is a Linn Majik / 109 system on the back wall and the Akurate system on the other wall, tonight complemented by a TV. A few light snacks were laid on.

I think the soccer ball game had taken its toll. Only 7 attendees.  Hope this doesn't deter them from other events.  The Linn presentation team were delayed at an install, so the shop team took us through the Daft Punk story, interlaced with music and video, including some unreleased promo stuff. Given their lack of rehearsals they did a great job.

Sound wise? I have to say that I was a little underwhelmed.  The first time I heard Akubariks was on the end of (non-Exakt) Klimax electronics about 10 months ago and it was an excellent experience.  The Akurate level DSM isn't expected to be as good, but it didn't wow me in the way I was expecting.   I think the proximity of the speakers to the rear wall wasn't helping - the bass sounding a little less than fleet of foot.

Regular Musings readers will know that I dont get on with Linn's 350 speakers.  Here, again, my view is that the Akubariks are just so much more musical and coherent in comparison.  Unfairly, they particularly upstaged the Exakt 350s that played in a furniture shop in London just a few days earlier.  I say unfairly because I think this was 10% down to the Akubariks and 90% down to the room this time!

Thanks to the Kensington studio and Linn for another musically educational evening. 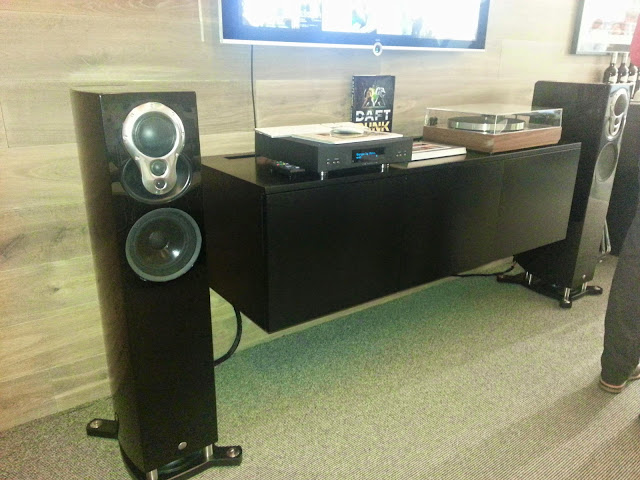