Having had some experience messing about with set up several times on a Thorens TD160BC MkII with different arms and platter mats (very successfully), and with an LP12 (not so successfully - got it close but ended up at a Linn dealer for a full service and set up), I approached the RD11s reasonably confidently, but also in the knowledge that if set up was a problem I'd just do a bit more research and then go back to it.  This is a project for fun and experience building, not as a serious source for my system.

So here's the starting point, a several decades old plinth, suspension and motor unit, sourced through the classifieds at hifiwigwam.com:


Sitting on the workbench in the garage, I started by giving it a quick clean, which wasn't too hard as its in such great condition and came packed with copious amounts of bubble wrap and with the bearing plugged, inner platter and main platter removed, as it should be.

The underside of the deck has no base plate - its lost this somewhere in its no doubt long and varied life.  Still, I think this could be a good thing on 2 counts - first it means easy access to all the relevant suspension adjustment options, secondly, because it is no longer effectively a box, there should be less chance of resonances building up inside which may affect the sound quality.

First was to check the alignment and fitment of the newly arrived soundsupports.com SME to Rega armboard adapter.


The RB202 is reasonably well made - its very recognisably part of the Rega RB250 family.  The arm tube is nicely cast, the bearings are super smooth with no discernable play and the cueing mechanism is smoothly damped and feels much more expensive than some I've used.  Looks like the main compromises to save money are the plastic moulded thread counterweight mounting and the basic looking captive signal output lead, which looks to be no better than the kind of freebie interconnects you tend to get inside Japanese hifi component boxes.

In order to reduce stress on the tonearm bearings, once the armboard was mounted to the arm, the cartridge was unpacked and installed to the arm, with the mounting bolts only tightened enough to hold the cartridge in roughly the right place.  The stylus guard and stylus were removed prior to fitting the cartridge body to the arm.  The bolts that came with the cartridge were used for this - they're metal, unlike some budget cartridges that come with very flimsy plastic bolts.  The signal cables were connected too, using the correct colour matching of each cable to the each pin on the back of the cart.


Next up, using ISOkinetic supplied oil, I ensured that all the existing oil was soaked up into kitchen towel and then refilled with the new oil.  Before fitting the inner platter I laid a small amount of kitchen towel around the bearing to catch any overflow - of which there wasn't any. 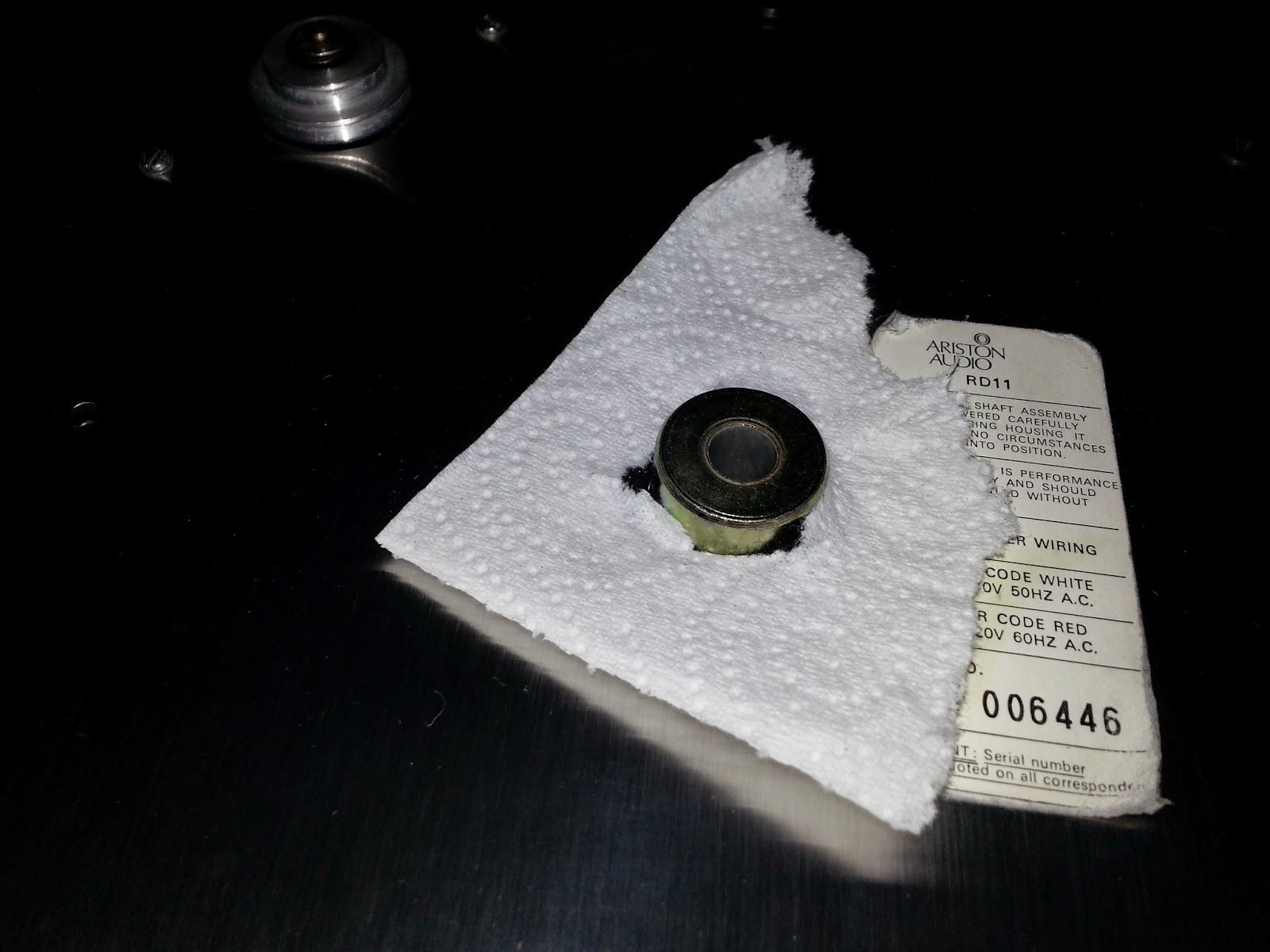 Having given the inner platter edges, outer platter engagement surface and the spindle a clean with alcohol and then a polish with a dry lint-free cloth, the inner platter was gently lowered into the bearing shaft - being careful not to "drop" it into the hole which could damage the bearing surfaces.  The last few mm of travel took about 10 seconds or so as the oil was pushed out of the way.  No excess oil at this point, so I'll remove it again later and put a little more oil in there.

The belt was then installed - fitting around the smaller part of the stepped pulley for 33rpm, then wrapping around the outer edge of the inner platter.  Unlike every belt driven turntable I've worked on / owned in the past which had flat ground belts, the RD11s uses a very narrow (2-3mm) square section belt, which is extremely easy to twist during fitting.  I took care not to touch the belt and inner platter surfaces to avoid getting finger grease in there.  Then on went the outer platter (which weighs around 2.5 kg).

The outer platter should force the suspension down and allow the platter / bearing / subchassis / armboard / tonearm assembly to "float" freely whilst hanging from the suspension springs.  However, the previous owner had diligently wound up the suspension springs pretty tightly to avoid any movement in transit, so although the assembly did drop a little, it was still a long way up above the top plate of the deck.