Way back when (so that’ll be about 18 months), Paul Noble – muso, hifi geek, well connected artistic director and generally all-round nice guy – created Spiritland. An idea inspired by “listening bars” in the Far East where music is played to listen to or as background to a quiet chat and where the quality of the listening is paramount. As a toe in the “audiophile bar” water, a long term residency was established at Merchant’s Tavern in the achingly hip – but still in the midst of a very long term re-generation - Shoreditch area of London, UK.

Good food, an extensive cocktail and whisky menu and great music played on a good music system. What could go wrong? Well, it’s a bit of a novel idea to expect British pub visitors to actually listen to and be interested in music, at least when its not blasting out of a massive system in a nightclub. But hey, maybe that niche is big enough, particularly in London, to make it successful.

I visited Spiritland at Merchant’s tavern a number of times and reported HERE and HERE on the blog. I liked it, even if the system isn’t really my cup of tea – I don’t do vinyl any more, and big speakers with horns and valve amps don’t usually do much to whet my appetite either. But it works – the relaxed atmosphere, the “selectors” playing their eclectic choice of music, people hanging out and enjoying the music. A decent quality system playing at sensible volumes works well in that environment, although I understand some of the Sunday afternoon sessions were a bit more raucous than the evenings I could make to the original venue. There’s a similar concept bar - Brilliant Corners - elsewhere in London, reviewed HERE, in my view its not in the same quality league, but seems to be very popular indeed.

So what’s new in 2016? Well finally Paul, Spiritland’s Artistic Director, has found a permanent home for Spiritland and launched into the concept wholeheartedly.

I was very aware that there have been large areas of regeneration around the back of King’s Cross station in London, but other than the magnificent new canopy of the station itself, I wasn’t aware of the extent of what’s happened back there. I usually travel in and out of London via Euston, so I’m using that as my excuse. On tracking down Spiritland’s new home at the back of St Pancras / King’s Cross, I was expecting older buildings seeking much work and a new meaning, narrow streets, abandoned businesses, may be a couple of pubs hanging on to life by a thread. But what a revelation. The area has been extensively re-developed and revived. There are gleaming new tall buildings with light and airy shops on the ground floor and apartments and offices above. There are renovated warehouses, open squares with interesting art, expensive looking paving, lots of pedestrian areas, a waterfront arena for outdoor performances, a magnificent and huge animated and rainbow lit fountain – even a theatre. It’s a very nice location indeed. 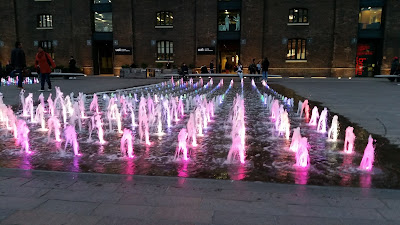 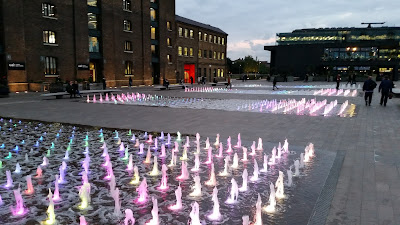 Spiritland is tucked along the side of one of the renovated warehouses on Stable Street and is suitably subtle as you approach, walking around the long queue for the nearby highly rated Dishoon curry house. I’m guessing the pavement to ceiling windows which are a back drop to the open air café chairs and tables are tinted (hard to tell at night), and the Spiritland signs and logos are subdued. Kind of sets the tone – time to relax, chill and enjoy some music and refreshments. The staff are attentive on arrival – you’re invited to choose where to sit and served at your table or at the bar. We settle down with a bottled premium ale from a brewer we’ve never heard of and look out from our bar stool across the room.

On the way in, the bar is directly in front, there are a mix of high and standard tables between the door and the L-shaped bar, which fronts the open kitchen.  Just inside the door on the left is the “selector” booth (Spiritland doesn’t call them DJs) complete with decks and electronics galore – but more on that later. Beyond the booth is the main seating / eating area and beyond that the massive Living Voice speaker system. To the right of this area is the studio – still to get fully up to speed but it will be focussed on radio shows, interviews, that kind of stuff.  Separating the main seating area from the entrance seating area is a divider where we find ourselves perched on our bar stools and over-looking the main part of the room and nice and central for the speakers.

Décor is somewhat eclectic. It all looks like good quality materials with a mix of stone / ceramic floors, natural wood, cloth hangings, display cabs (full of audio gear – most of it vintage) and exposed environment piping hanging from the ceiling. The main area looks like a somewhat up market canteen with rows of tables and chairs, but on a later visit we find some circular tables in there to break up the previously regimented look. Lighting is low and subtle, quality jazz (no plinky-plonky nonsense here tonight) and a subdued buzz of conversation. Relaxed. Inviting.

Even the individual loo cubicles are highly appointed and each has its own pair of Tannoy speakers – not yet functional, but a fun touch. 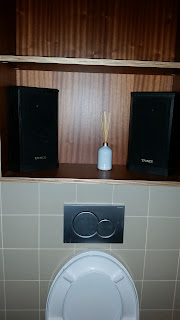 For the audio geek, there is much on which to feast the eyes.  Dual Technics 1200s carrying Jelco arms, a fancy handbuilt mixer, dual Pioneer CD decks of the DJ variety and, star of the booth show, a Kuzma turntable resplendent with a pair of arms and carts.  Unfortunately it wasn’t spinning on our visit – still in the process of being set up.  The intention is to use this deck at least once a day to play an album from end to end every evening around 6pm. 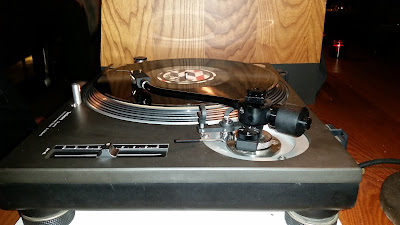 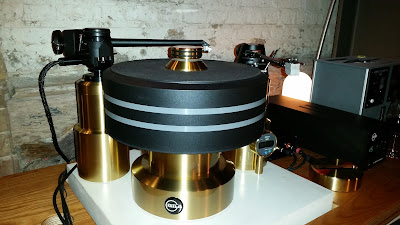 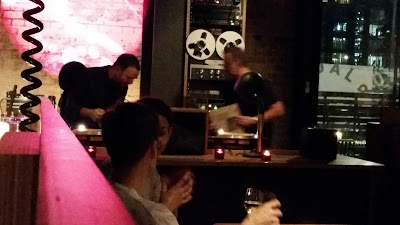 Valve amplification and the speakers come from highly respected boutique manufacturer Living Voice. Some may be aware of the extremely expensive Living Voice Vox Olympian speakers – something of a deity in the land of valves and horns occupied by the few but admired by many. The Olympians are a tour de force of multiple carefully chosen drivers in exquisitely built and finished cabinets – and somewhat larger than the average living room can accommodate. What Spiritland have arranged – and I imagine there’s not a lot of this about – is a pair of Vox Olympian technology, but in more prosaic, shall we say more robust, cabinets.  There’s none of the exquisite and expensive woodwork here (as you can see in the photos), but the drivers are identical and I understand the cabs are the same volume as the full-on speakers. These come with the optional massive twin-driver bass cabs too. 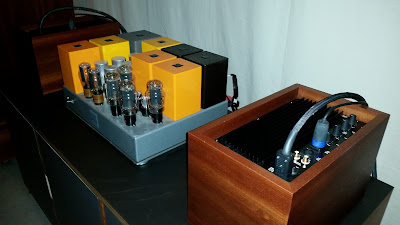 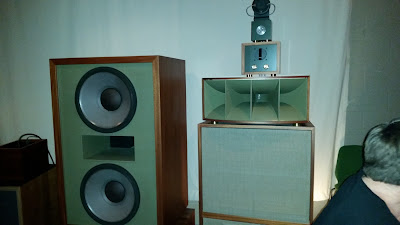 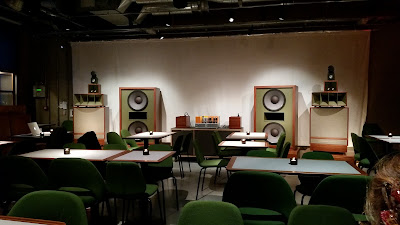 The programme of music is varied and extensive. Music plays all day, every day, from breakfast through to after midnight. Every early evening an album is played in full, then the evening’s “selector” turns up with their own choice of music for the night.  Some evenings there will be more than one selector and weekends often have additional sessions during the daytime. Paul’s ability to attract true music enthusiasts from across the industry to “select” for the evening is impressive. True musos will no doubt know many of the names featured, but more will not be aware of the names, but will be appreciative of the bands they’re part of (recent example, Hot Chip), the mega clubs they’ve performed DJ sets for, or are producers or contributors to music and bands many of us will be familiar with. And you never really know what you’re going to get, and that’s part of the attraction – what new music will you be exposed to, will you like it, will you be hoping for the next track as soon as possible? Its pretty much guaranteed to be an interesting ride. Read the descriptions of the type of music likely to be played by the day’s selector on Facebook and you might recognise some of the genres, but some of the sub-genres may as well be in a different language. There’s a real knowledge of, and passion for all kinds of music here. 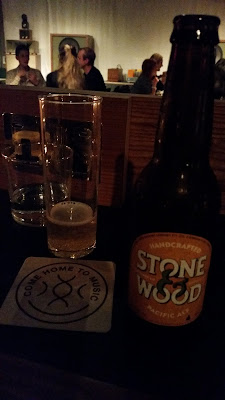 On both visits we felt welcomed, looked after without fussiness and enjoyed our selection of beverages. I’ve only eaten the once – a Burrata, Beetroot, lentil and mustard salad which was tasty, nicely presented and a reasonable size. We’re not talking a proper full-on main course size dish, but there’s none of that “small plates” (read, tiny over-priced portions) nonsense here. Beers are a bit pricey but the food was OK value and the menu is certainly interesting to browse through. Next time in, I guess I’ll have to force myself to try a sweet – rather reassuringly called “puddings” on the menu – sounds comforting. 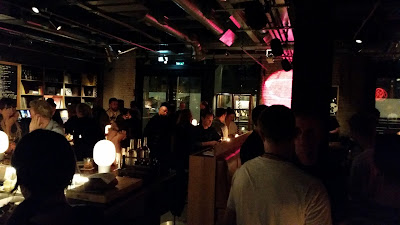 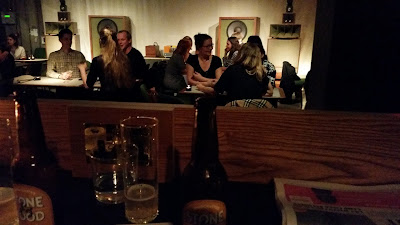 So how about the sound? The key area of interest for this Musings blog. Well, it has all those classic vinyl / valve / horn values sewn up. Smooth, detailed (as best as you can tell in this environment), organic, flowing and bordering on the polite. Later the volume was cranked up a little and things got more interesting but its strange how those massive bass drivers don’t work in the way they look they’ll work. They look like they’re going to pump out loads of massive and boomingly uncontrolled bass that can destroy a tune. But they don’t – they just get on with quietly and subtly under-pinning the rest of the music, which is distributed rather obviously across the various drive units – its not a coherent whole in that sense, but it does flow together from a timing and musical perspective.  Just don’t expect a point source and flawless imaging! When put into the context of what Paul is aiming to do (and very much achieved) - to bring a high quality listening environment to a relaxed venue aimed at music lovers - and it does its job very well indeed.

Go enjoy if you can!
Posted by Neil Hallworth at 15:24