Some notes and thoughts about exhibiting at the Hifi Wigwam show this year.

Prep started a few weeks in advance on building a checklist, choosing music and printing the kit list, door signs etc. etc. The weekend before a few network cables were disconnected from the house network and connected up to a stand alone router so that there is a small self-contained router of streamer, router and laptop - just as it would need to be at the show.  With AssetDB running on the laptop and around 250 tracks in the database all the set up stuff was tested - database, Linn Konfig, SPACE, Linn Kazoo etc.  Checked on 2 laptops too to make sure a standby was available.  Lots and lots of boxes and spare bits of quadraspire extracted from the loft and tools and spare cables put into crates.  The day before was packing of gear into boxes and checking through the checklist - several times.

Saturday of the weekend started early and boxes packed into the car by about 10am ready for the 2.5 hour drive cross-country to Scalford near Melton Mowbray.

With boxes and Richard packed into the car the adventure begins. We left a bit earlier this year to enable us to set the system up in good time and there was the Linn demo to attend in the afternoon.  Uneventful journey (well, apart from a small detour) meant arrival in time to enjoy the first innovation for 2017 - lunch butties and a cuppa on the Wigwam house. Room 237 is an upstairs bedroom as far as it is possible to get from the hotel entrance. Not too bad though as there's a fire exit door just downstairs and it was possible to get the car quite close to this.  It took about 90 minutes to shift the beds in the room, carry boxes in, unpack them and get the gear at least connected up.

The Linn Exakt.Design launch demo was a good excuse for a break, mid-afternoon.  The engineering team (no marketing) did demos of music played through minimum phase crossovers compared with phase linear (well, more phase linear) digital Exakt crossovers into a pair of modified Wilmslow Audio kit speakers.  A convincing demo, well presented.  They used graphs too which appealed to many of the Wammers.  We didn't hang around for the workshop portion, we had our own Exakt system to set up.  Interesting that Linn are looking to make it available to DIY people to design Exakt crossovers.

We spent about an hour moving the speakers around using tune-dem - the room is all partition walls, ceiling, bouncy floor, a big built-in wardrobe and only the wall behind the speakers is actually solid (but dry lined) and it was nearly 50% window. So we put a lot of time into getting the best sound without SPACE room optimisation.


Remembering Harv's experiences and solution last year, we added some marble slabs under the speakers which helped again (and inspired others in the building!). So after that we measured all the room dimensions, speaker positions etc.  Then, as is the way of SPACE room opimisation, we focussed very heavily on the first room mode and adding / removing the sub first mode. This took another hour. At that point the system was sounding very good and it was time for curry and beer on the Saturday night. After the grub (some of which I ended up wearing, but we'll not go too much into that) we invited the Linn guys up for a listen and they were polite enough (or perhaps genuinely enjoying, which Philbo seems to have done) to hang around for well over an hour in the room. Then we had more visitors and then it was time to sleep (which meant stacking all the chairs away and rescuing our beds from the en-suite).


There's nothing like having Linn's Exakt.Design software team, the Speaker Hobbit and the Engineering Director listening to your pride and joy after a couple of hours set up in an unfamiliar room to help you relax into the weekend...thankfully the Doombar was helping calm the nerves.


The first room mode (the biggie) was reduced by 1.5dB and narrowed by 0.02. The first custom filter below the first room mode is one of Linn Forum member Paulssuround's "below 1st base" filters from my home which we tried on and off with on being marginally better - it could probably have benefited from lots more experimentation but there just isn't the time at the show. There are a couple of "vocal" custom filters in there, also from home which remained untouched from the home values.
Speakers had more toe-in than at home (the side walls are much closer) with the RH speaker having more toe-in than the LH speaker - I think due to a step in the RH wall about 2/3s of the room length back from the speakers. That step in the side wall was for a built-in wardrobe which we stuffed full of duvets and pillows as it was horribly resonant when empty. The listening position we compromised on - it is deliberately off-centre and actually sits between rows 2 and 3. Row 2 positioning was better if you were in Row 2, but significantly worse in Row 3, hence the compromise.
Twin beds (not shown) are on their ends in the en-suite...

So there just isn't time to go into everything. We really had sorted out the room modes and that was the biggest challenge. On Sunday we just played music and never touched any other settings - the 1 hour 15 mins of Win 10 updates first thing in the morning was stressful enough!

Being out in the "sticks" of the hotel, we were very quiet for the first hour with only 3 visitors.  But after 11 it ramped up quickly and then it was busy all day, sometimes it wasn't possible for visitors to get in the room.  A good lesson for visitors though - get there early and head for the farthest reaches of the hotel - the rooms will be quiet and easy to get into. Many visitors commented on how we'd achieved a deep but taught sound in the room which the regulars know are very difficult rooms, due to their construction. That lead on to a good few conversations about SPACE and showing the Konfig graphs on the monitor.  We had lots of re-visits during the day and some who stayed in the room for over an hour.


Of course, there was all the packing away again which took us an hour and 20 minutes (3 of us working on this) pleased the system is all back up and running at home, but there are still a lot of boxes to go back up into the loft - a week later.

So its quite some commitment, exhibiting at the show.  But its also strangely rewarding.  The atmosphere in the hotel is something unique and special, particularly the opportunity to wander around with a beer on Saturday night - otherwise you miss a lot when exhibiting.  Thank you to Richard and my brother John for the hard work with the equipment and taking their share of room hosting - it wouldn't be possible without them and they're good company to. Thanks to the Wigwam team for making it all happen, the hotel staff for putting up with us crazy people, to the commercial rooms who make it viable and to all the other exhibitors without whom it would be a non-event. A big thanks to my family for putting up with the disruption and giving me the time.

Some comments from around the forums:

andrews:  "My first experience of an Linn Exakt set up ... dare I add that I thought this (possibly) the 'best' sound of the show"

linnfomaniac: "Sunbeamgls, your system was lovely too (but as a fellow Linnie, I didn't think I'd be disappointed)"

David H: "Thanks to sunbeamgls for letting us enjoy his superb Linn system"

SAP7: "the rather lovely 26s have me hankering after 24s"

Phil Budd (Philbo): "loved the sound you are getting from the 26s"

insider9: "Having gone to Scalford I was really inspired and really amazed what can be achieved at a relatively low cost. Yes, the Linn & PMC (in Sunbeamgls's room) wasn't in the low cost category but the level of clarity I've heard haunts me. To that extent that I'm considering wholesale changes to my system. If I can at least go some of the distance at a low budget, I need to try...the overall quality was just stunning. I think I mentioned to you at a time how amazed I was what you managed to achieve with the large size of speakers in such small room and at a moderate volume."
"Very impressed with clarity of Sunbeamgls's PMCs with active crossovers in room 237."

Gizza: "great respect for the hard work you put in to maximise the sound quality. Great to see that it paid off, too"

Rob5ft19ins: "Wonderful to see the efforts that went into making your room sound so sweet. I sadly managed only a minute or two in there to appreciate it, but was hugely impressed by what I heard"

steveeg: "the things that got me going back for more...Sunbeamgls's Linn system - plus a super nice bloke with a tremendous playlist of stellar tracks"


And one last photo, courtesy of Hifi Wigwam member Bazzer: 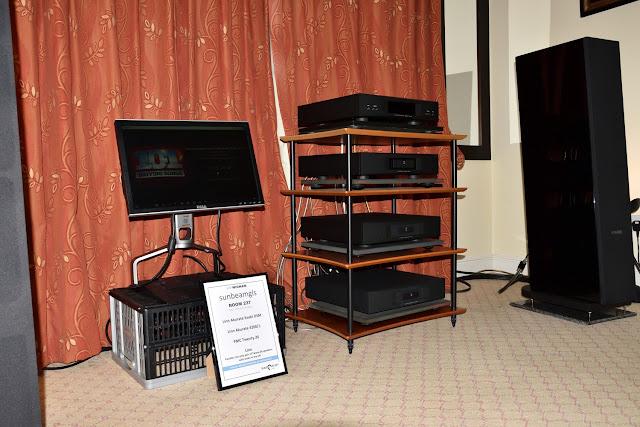