LINN, KUDOS & AUDIOQUEST AT THE BRISTOL SHOW 2018 - SOUND OF THE SHOW 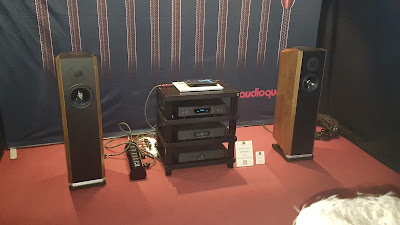 Well at last, a chance to hear the T-606 Kudos with Linn Exakt technology.  Not yet launched publically, the Exakt filters for T-606 are on their way. The main purpose of this room was to demonstrate Audioquest power cables.  The demo went from all stock power leads from a typcial high street Belkin distribution block and then gradually replace bits with Audioquest products.  First the standard Linn mains leads were replaced with AQ's starter product, the £160 NRG2 (soon to be replaced by Monsoon) - one for each of the 3 Linn components, but still plugged into the Belkin power strip.  A nice improvement in dynamics and clarity.  Then these were connected into the AQ Niagara 1000 power distribution block. This has a number of lightly filtered sockets and one unfiltered socket into which the power amplificer was connected.  Most of the design of this block is around care an attention to earthing and making sure that the earth has a lower impedence at the wall socket than it does at the component end - said to ensure that high frequency noise flows down the earth away from the system.  Another improvement here with similar quality and magnitude to the first change.  Then everything was swapped back to the standard leads and power strip and the sound became less clear and the imaging shrank significantly.  A clear change, but not as big a change as some other cable demos.  Worthwhile though, but as ever, VFM is a personal perspective.  What about the system itsself?  Well, those T-606s continue to shine - but with Linn Exakt are a step above what I've heard from them so far with standard Naim amps and their internal passive crossovers.  What Exakt brings to them is a real sense of purpose - a purpose to deliver the music in the cleanest and most convincing way.  There's lots of good technical attributes to talk about - the outstandingly deep bass from a reasonably compact enclosure, stunningly pin-point and ultra stable imaging being good examples - but its the way you just get wrapped up in the music and the message from the artist.  I go back a couple more times to this room, spending about 45 minutes in there later in the day, enjoying each visit. I later learn that the team hadn't had the time to set up SPACE optimisation for this room, so there's potentially more to come from this system.  Deeply impressive.