Hegel DAC equipped integrated amps were at the heart of 2 systems receiving audiophilemusings awards at the 2019 Chester Show: 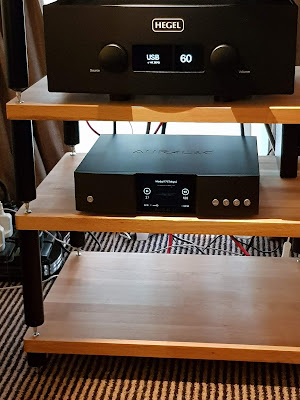 A relative newcomer to the hifi scene in the UK, Hegel have very quickly forged a good reputation for their integrated amplifiers.  I've heard the all-in-one doing a great job with Amphion speakers in the past, but today was the first chance to properly listen to their main integrated amplifier products.  And it proved be something worth waiting for.
Here an Auralic streamer was being used purely as a streamer, passing a digital signal to the DAC onboard the £9.5k Hegel 590 integrated amplifier.  Chord Epic Twin cables fed a pair of Dynaudio Contour 20 standmounts. 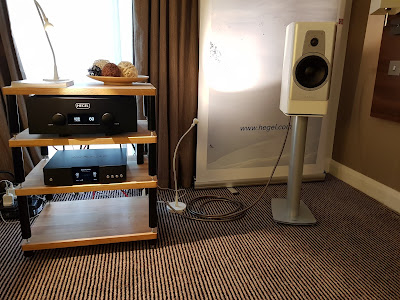 We listened to a good few tracks in this room too.  At around £15k this is not pocket money kit, but compared to the £400k in the barn, its an absolute bargain.  I'd much rather spend my time enjoying this system which delivered musicality in spades. The medium sized standmounts made the best of the source they were being fed - flowing and smooth whilst delivering strong dynamics and a suprisingly deep sound.  Vocals were perhaps a little recessed in the mix, but this is a very minor point and I'd much rather this than the upfront and brash presentations that some systems have, masquerading as "exciting".  We would've gone back for more but there wasn't time today.  Great stuff and another case of Auralic appearing in an award winning system, but I suspect the Hegel to be the star turn here.

A thank you to the Innuos room host here as we turned up a couple of minutes after official closing time but he happily powered the system up again to give us a 10 minute listen.  Very helpful. 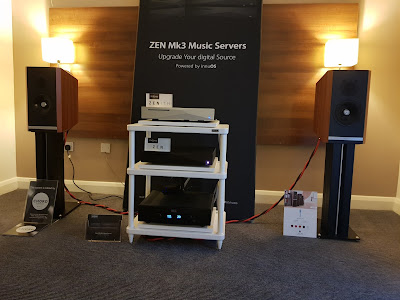 I understand earlier in the day that Zen Mk3 vs Zenith Mk3 server comparisons had been demoed.  We just listened to some tracks using the Zenith as the source.  Having just enjoyed the slam and scale of the Naim / ATC SCM50 system, I was a little afraid that the smallest of the Kudos Titans, the 505, might seem a little undernourished, especially driven by Hegel's more modest £3.2k integrated amp with DAC, the 190.  But there was no need to be concerned.  Perched forward on the edge of the sofa moved us out of the worst of the room mode and directly into the music.  Insightful, tuneful, detailed, driving, emotional vocals all present and correct.  But the weight behind these chunky standmounts were the surprise here, a more substantial sound then when last heard with the Linn Selekt at Bristol.  If only we'd got to this room a little sooner, we could've enjoyed a lot more music in here.