The Linn DS (digital streamer) family is, at the time of writing, just over 13 years old.  The first internationally recognised true HiFi company to take streaming seriously, Linn launched their top of the range Klimax DS as a market leader.  There have been several iterations since, all versions able to be upgraded to the current specification.

But the family has grown since then.  There are pure DS players (network connection, streaming capability, onboard stereo DAC), DSMs (all the above plus pre-amplifier capability, including analogue inputs) and other DSMs that do what DSMs do but have a built-in stereo power amplifier. Spanning the complete range too - from the designed-to-be-hidden Sneaky, through Majik, Akurate and Klimax ranges.  Most recently the  modular Selekt DSM has been launched which can be all sorts of combinations of streamer, pre-amp, all-in one stereo, all-in one surround sound and more.  Surround modules can be added to DSMs too. Then we throw in the choice of outputs - traditional stereo analogue, Linn proprietary Exakt digital link to Exaktboxes or Exakt integrated speakers and a combination of analogue & Exakt on some units.

That's probably pretty confusing to the uninitiated, and understandably so. But there's even more to it than that. Software. Without software these players would be expensive (or very expensive) decorative (or in some cases not so decorative) items.  The software that makes them operate is vital.  But one of the beauties of the Linn DS / DSM is that the software continues to evolve. And every DS / DSM since that first one back in 2007 is capable of being upgraded to today's software versions. And Linn releases the software updates without charge. That's right, a 13 year old product is still being upgraded by Linn on a frequent basis - and it doesn't cost the original, nor subsequent, owners a penny.  Buyers need to keep that in mind when they think Linn gear is too expensive. Some of these software releases have unleashed even greater sound quality and musical enjoyment from the streamers, not just new functionality.

So even though Tidal and Qobuz streaming services weren't available back in 2007, they are available on the DS/DSM today through those software updates. As is the ability to tune the output of the music to counteract the worst impact of the room on your music.

Why do I mention all of this? Well where there is software, there needs to be ideas. Creative ideas. Ways to make hardware perform tasks that weren't originally envisaged. New ways to exploit, new services to offer, new functionality for the user. And that's where Meraki Acoustic comes into the Linn DS/DSM picture.

Many of the DSM devices have a built-in analogue turntable input - MM or MC - and this was the inspiration behind the Songcorder app from Meraki Acoustic. The DSM turns that incoming analogue turntable sound into a digital signal. What if there was a way to capture that digital signal, feed it to a computer and capture it as an audio formatted file? Could that be a way to digitise all that precious and delicate vinyl? Could a DSM customer capture their favourite music in format that doesn't wear out? Would they finally be able to get that vinyl only release from 1976 into a digital file to listen to on the move, in the car, in rooms without a turntable?

The answer is yes - with Songcorder.  Meraki kindly sent me access to a copy to download to investigate further.  As most will know, although I have a turntable, its not the main source in my system.  Even so, I thought it would be interesting to give Songcorder a try.

The download was easy as was install on my up to date version of Windows 10 running on a Dell Latitude E6440 laptop which has a 3 year old Core i5, 8GB of memory and an SSD.  I tested it along with my Ariston RD80sl / Linn Basik Plus / Goldring 920 turntable and my Linn Akurate Exakt DSM through its built-in MM phono stage. The instructions recommend a wired connection for the computer running Songcorder and for the DSM - wifi being "potentially" troublesome.  In practice I found wifi to be almost always troublesome so stuck with an ethernet cable throughout, which was totally stable. Your DS or DSM must have Songcast enabled for Songcorder to do its thing.  It must also be listed in the compatible devices list here: https://meraki-acoustic.com/songcorder/#Compatibilty

If you're as old as I am you'll remember pressing pause and record on your tape deck, gently lowering the stylus onto the record and then pressing the pause button before the track started - the way we used to be able to play our own music in the car or the kitchen or later on a Walkman or similar.  Well Songcorder is similar in concept - whatever you're playing through the DS or DSM will be captured and recorded as a digital file ready for use with your streamer or loading to your DAP.

Once installed and fired up, this is the simple interface: 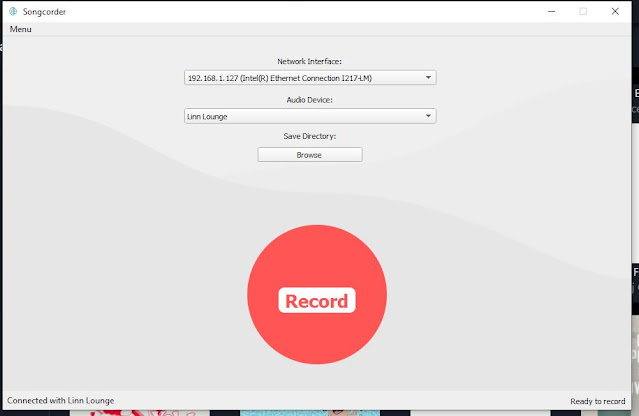 Select your wired connection in the Network Interface drop down, select the Linn DS/DSM you want to record from (the software found all 3 Linn devices on my network) and select which directory you want to drop your recording into, and that's it. Nothing fancy but nothing complicated nor confusing - refreshing.  I really like the simplicity.  Start your turntable playing and click on that big red button. Done. Of course, you need to keep on top of what's going on.  You could record a whole album side and leave it at that. Or you could then use some software tools to break down the side into individual tracks. Or you can do what I did and capture individual files for each track on the LP.  When recording you get the simple screen below, just click Stop when you're done. 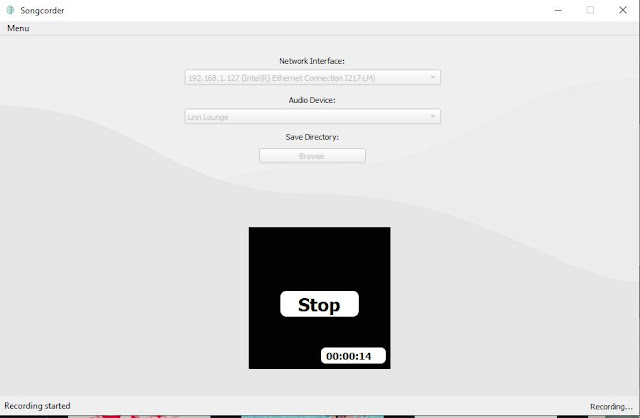 For each vinyl recording Songcorder creates a file at 24 bit 192kHz resolution using my Akurate Exakt DSM - I suspect that this is the resolution used by Linn when converting analogue to digital. Recordings from earlier Majik DSMs would be resolved at 24 bit 96kHz due to its lower resolution ADC stage. Songcorder generates what looks like a unique filename in FLAC - a widely supported format that can be converted to other forms by many of the popular digital music file handing programs available. You'll need a music file editor (I use TagScanner but there are lots of choices) to rename the tracks and input your own meta data such as Artist, Album, Track, Year, Genre etc.

Only one element of Songcorder I didn't enjoy is that it goes back to its default folder every time, rather than remembering where you prefer to capture your recordings. Its a very minor point and doesn't take away from the fact that this is a superbly simple tool that does exactly what it sets out to do.  The good news is that this gave me the opportunity to test the bug reporting process and happy to say that work is underway to address this as I type.

Sound quality is excellent - when playing back a vinyl recording, as far as I could tell, there was no degradation from the original analogue conversion I was listening to as recording took place.

Whilst vinyl is the inspiration for Songcorder - to preserve those rare recordings or to create back up copies, for example, I did find that Songcorder will capture any stereo audio input on the DSM that's connected by toslink, SP/DIF or analogue inputs. Streaming works, but HDMI was less successful - theoretically it should work with stereo unencrypted content, but I didn't find any. Streaming works equally as well as the analogue input and captures the file in the resolution of the original source.  Of course an anlogue stereo output from such devices would work. Songcorder picks up the signal before any of Linn's SPACE Optimization or Exakt processing is applied.

Of course, one should be careful about copyright issues and only capture music already owned, or material that is free from copyright.

An impressive piece of very effective software - I was so pleased by its performance I have purchased a copy, an equally smooth and simple process. At the time of writing the software cost a mere 20 Euros and is highly recommended.