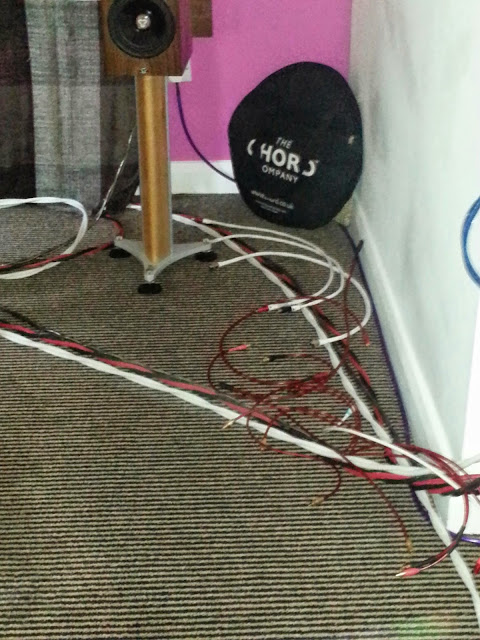 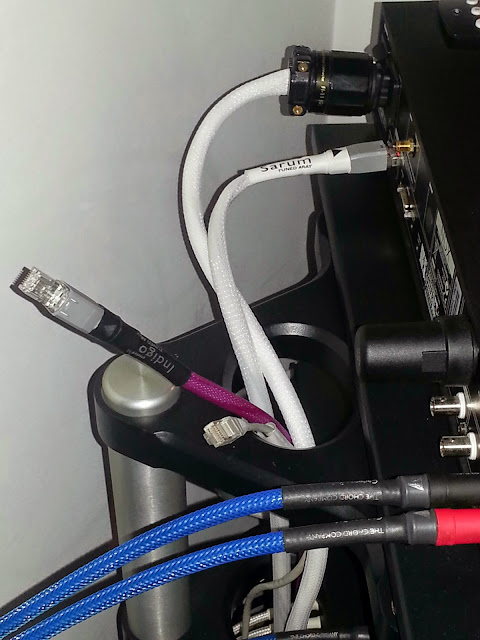 Here we heard some cable comparisons, at prices in the stratosphere.  And yes, the upgrade from 3rd from best to 2nd best to the Sarum arrays was there to be heard.  But I still can't get my head around a pair of speaker cables that cost £2500.  Its difficult to justify and the changes weren't of the magnitude that a good Naim power supply can bring, or an upgrade from a mid-range DAC to a top-end DAC.
And now for the controversial bit.  Chord are now making Ethernet cables.  Except they're not.  They claim they make streaming system cables - by focussing on the "downstream" flow of bits of data with the "upstream" being untouched as its just about control instructions, not the music.  How you can differentiate is beyond me, but I'm not a network engineer, nor am I a cable engineer, just passing along the explanation from the man from Chord.
Anyway, using a Naim NDX into what I think was  SuperNait and then along to Kudos Super 10 speakers, the only thing to be changed in the comparison was the Ethernet cable.  The volume control was not touched, the track was the same track, the NAS and network components (router and switch) were not changed.  The NAS was connected to the switch by a Chord Sarum Tuned Array streaming cable, then the 3m or so length between the switch and the NDX was swapped from £ patch cable to ££ Chord C-Stream and then to ££££££ Chord Sarum Tuned Array streaming cable.
Here I am, probably one of the most likely people to say that this will make no difference to the music at all.  And pretty determined to be very very sceptical about any demo.  But there it was, all looking above board and also very distinctly audible (going both ways by the way - up and down the cost spectrum).  I treated reports of differences being heard with a great deal of caution and I expect you to be doing exactly that.  Most impressive of the demos was a Jake Bugg track that sounds like its recorded using some really cheap equipment in a bathroom (it might be that they intended for it to sound like that?) but it really was virtually impossible to listen to, so harsh and gritty it is.  With the Chord Sarum, it became easier to listen to for a little longer, with Jake's voice easier to hear and the instrumentation being more distinct too.  Its still an awful recording, but we managed to listen to about a minute of it rather than 10 seconds!  It was still very rough.
The cable was then swapped back and the track became horrible again. I often find going back in a change is more telling because there's always the risk that familiarity with the music means you're more likely to start hearing subtleties missed in first hearings.  Of course, if the apparent improvement in sound was purely down to familiarity then it would seem to get better again when listening one more time on putting the system back as it was.
As for the so called 'expectation bias', well, if it exists then my expectations that there would be ababsolutely no change at all would've been borne out. But weren't.
There were about 6 others I
in the room, all of whom thought they could hear a difference.
I'm stumped to explain it, and the man from Chord was very apologetic for the ridiculous pricing, but there it is.  Very surprising.  I don't think the differences remotely reflect the price of the cable (£1,600 for 1m!) but it is very interesting that an effect can be heard.  It'll be great to find someone who can work out what's going on here and can reproduce the same cable effect for a tenner or so.  Will need to give the C-stream a try at home, to see if the effect can be replicated in a more independent context with different networking components, and to compare direct cabling to just the last bit of cable from mains over Ethernet.
I didn't think I'd ever be typing a report like this, but there it is. Bizarre.
Posted by Neil Hallworth at 12:31