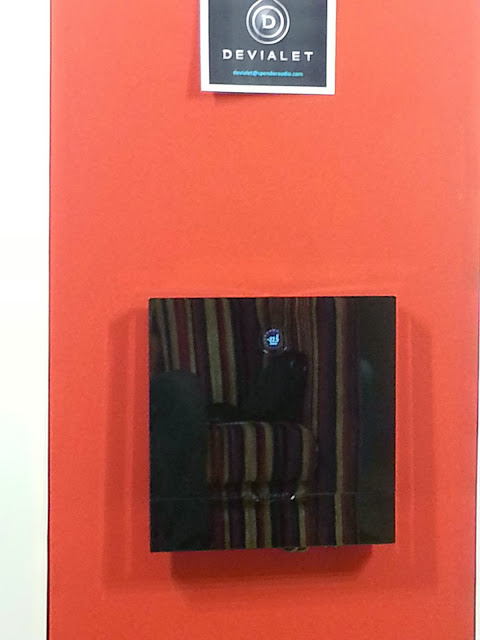 Devialet 170 hanging around in the Spendor Room 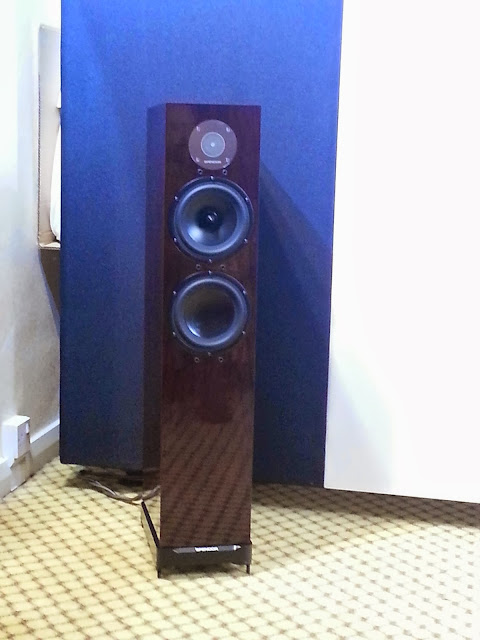 Spendor floorstanders.  Having just heard the Naim Statement system these sounded polite, weak and tiny.  So I'll not really comment on them here as I don't think it was a fair time to listen to them. 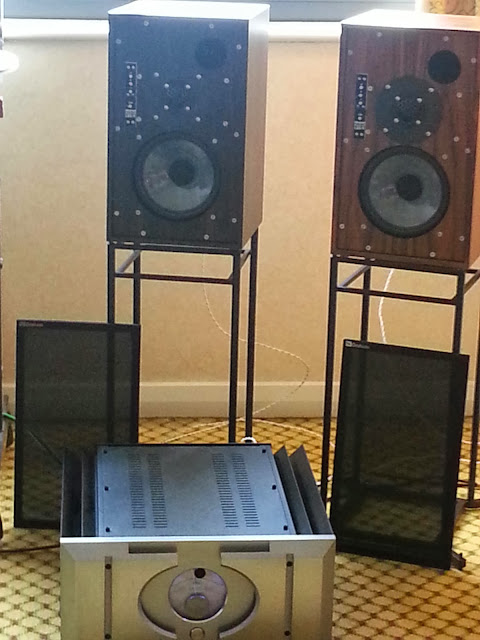 Here's the big one for the Bristol Show in 2014 - the first public airing of the Naim Statement amplifier (that's be just the $120k then).
I queued outside for about 30 minutes before the doors opened because I knew that Naim were running ticket only demo sessions and its something I didn't want to miss.  Queued again at the Naim stand on the ground floor for another 5 minutes but was offered a choice of times for the demo and elected for the first one at 10:15, so pretty much straight up to the session.
There was a presentation to begin with where we learned that the Statement had been in development (from idea) for about 10 years and much of that was waiting for the right technology to be available.  Ground-up design, yet it still uses many of the usual Naim approaches such as suspending the circuit boards and separating the noisy bits (e.g. transformers).  Naim worked with unusual suppliers such as those who make components for satellites, and they've had a lot of new component level designs built which means high development costs for such low production numbers.
Power is 750W per channel (which apparently only makes it capable of being 1.6 times louder than the NAP 500's 140W).  The design has no feedback which increases speed.  The volume control is a step resistor attenuator - but it doesn't clunk between steps because as soon as the volume control starts to move the signal is switched over to a continuously variable volume control which moves in tandem with the stepped one.  When the desired volume level is reached the signal switches back to the stepped attenuator.  They didn't dem this but they say its seamless.
Design objectives were no compromise, ultra fast, drive any speaker, work as well at low volume as high volume (also not demonstrated!).   The amp in use was a pre-production unit with production starting this Summer.
The system today was predominantly using the NDS streamer with 2 x 555PS DR power supplies, prototype interconnects into the Statement then through some prototype speaker cables into the Focal Utopias.
Note the prototype cables - these are expected on the market sometime this year.  That's a big change for Naim - NACA5 speaker cable has been around over 25 years now.

What about sources?  Are they good enough?  Well, Naim said "when we put the NDS / CDS and their PSUs into the Statement, we realised just how much better they are than we really understood them to be".  So they are happy to use these sources - and this was a subtle phrase to pick up on - "for now".  I also overhead someone asking about the change of logo from green to white and the answer was that the white was for the "statement range".  So it looks like there's more mega-bucks kit on the way.
After playing 6 tracks of music, there was a chance to ask questions and to have a browse around to look at the components.

Listening thoughts after the pictures. 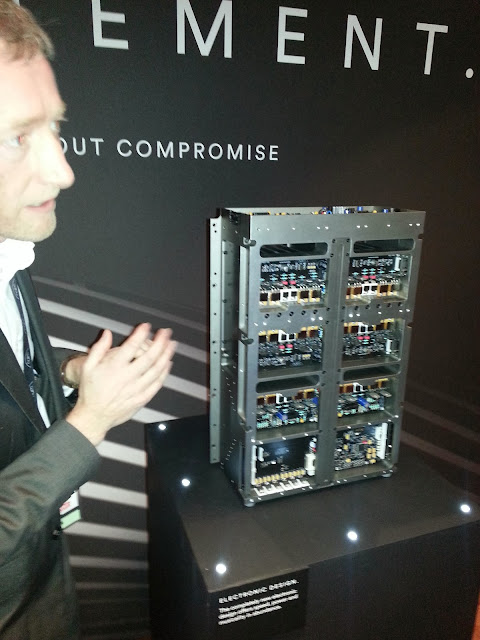 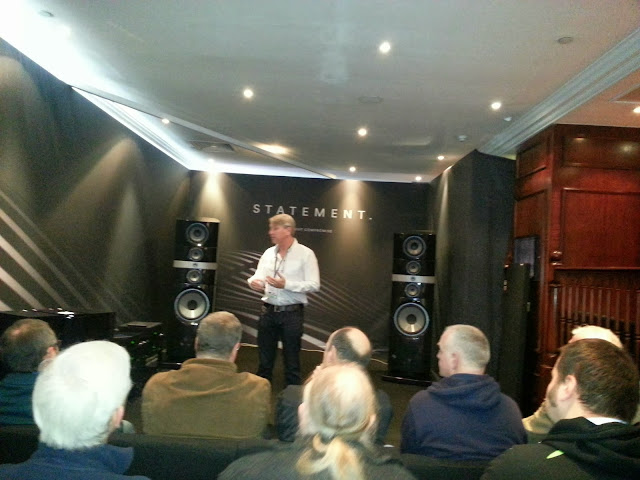 So how does it all sound?  Well, I'm not a Focal fan, so let's get that out of the way first, but using the Grand Utopias is still going to be a much better experience than Naim's own Ovators.  Of course, Naim and Focal are now one and the same company.  And today, in the Naim Statement room, didn't make me change my mind (although see the post on Focal / Naim with the Aria 900 speakers at Bristol).  This system is blindingly fast - transients like you've probably never heard before.  There's clarity and detail in spades.  Bass guitars have a really gutsy bit to them.  Vocals are extremely expressive.  But there's that Focal brightness, and a system that costs this much shouldn't have splashy and blurred cymbals, should it?  The sheer size of the Focals also leads to a weird soundstage - acoustic guitars that are about 5 feet tall doesn't sound right to me.
So its very impressive, but I didn't feel the music much.  It felt like a technical achievement.  It felt like listening to hifi.  So I heard more musically enjoyable systems elsewhere today (including Naim / Focal in the Focal room).  As a technical exercise this is very impressive, but I don't want just technical, I want emotional too.  Glad I'm not a billionaire or I might've pre-ordered one by mistake!
Thanks though to Naim for pushing the boundaries, striving for excellence and making it possible to have a listen, and for the small lapel pin badge provided to each visitor to the room.
Posted by Neil Hallworth at 03:22