With just over 2 weeks to go to The Hifi Show at Scalford, noticed earlier this week that there was a problem with one of the Mission 773e speakers I'm planning to use at the show.  Spotted a small gap between the top of the front baffle and the main cabinet on the LH speaker then checked the RH speaker to confirm that there shouldn't be a gap - and there shouldn't.

On closer examination it was possible to get hold of the edges of the baffle at the top and gently pull it further away from the cabinet - to about 3mm.  When doing this the baffle flexed slightly as it was still fixed properly from about halfway down the cabinet to the base.  Not sure if that's due to some over zealous use of the volume control, or just that the glue has dried on these 15+ year old speakers.  This is what the speakers look like: 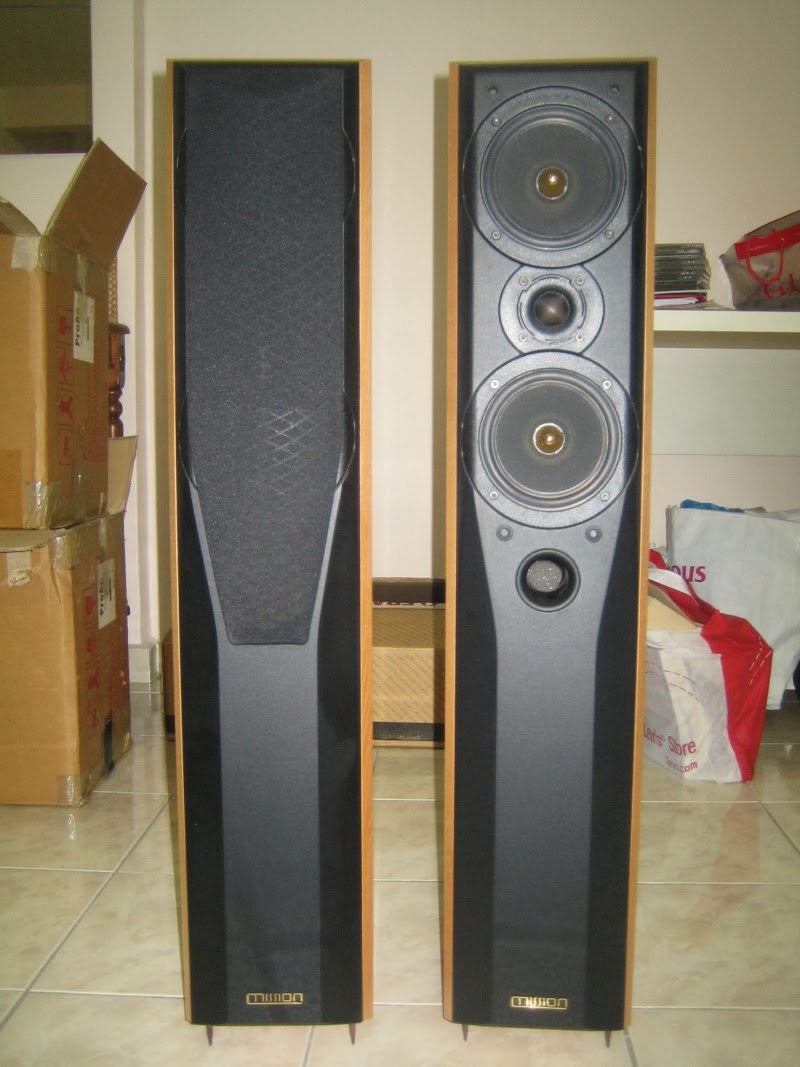 So the baffle was OK from just above the lower mid-bass drivers down to the base of the cabinet, but not good from there upwards. 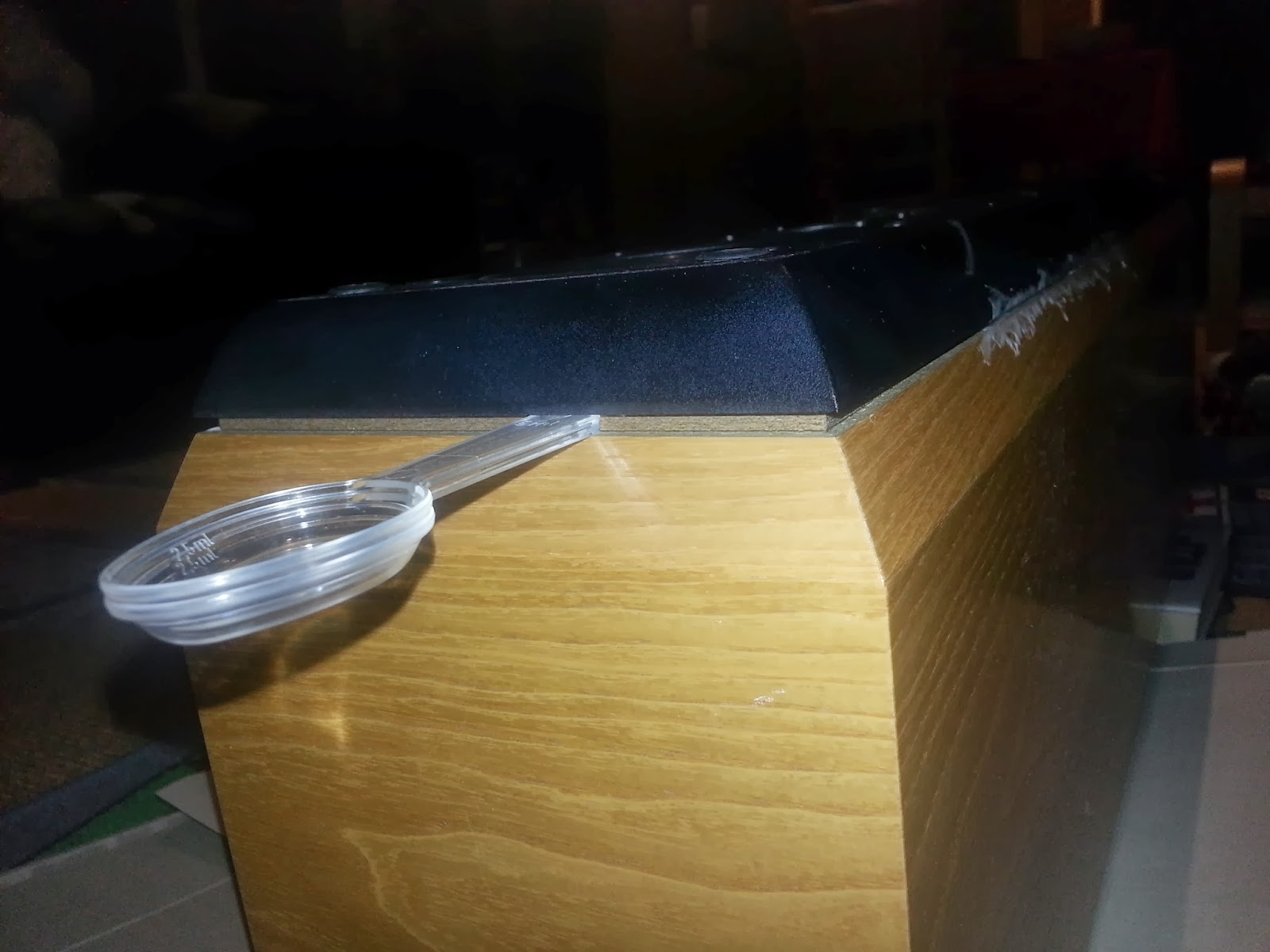 At first I imagined having to use clamps whilst gluing the baffle back on, but with the speaker lying down on its back, a quick test with a decent pile of books proved that the baffle would flex back into position without needing any clamping.  Also, as the baffle is rebated into the main cabinet there was no problem with alignment and there are lots of surfaces on which to plaster a good bit of glue.

So, with a little help from a pair of medicine spoons acting as wedges, got to work with a modelling brush and a pot of EvoStik wood glue.  Pushed as much glue into the groove as possible, a bit messy: 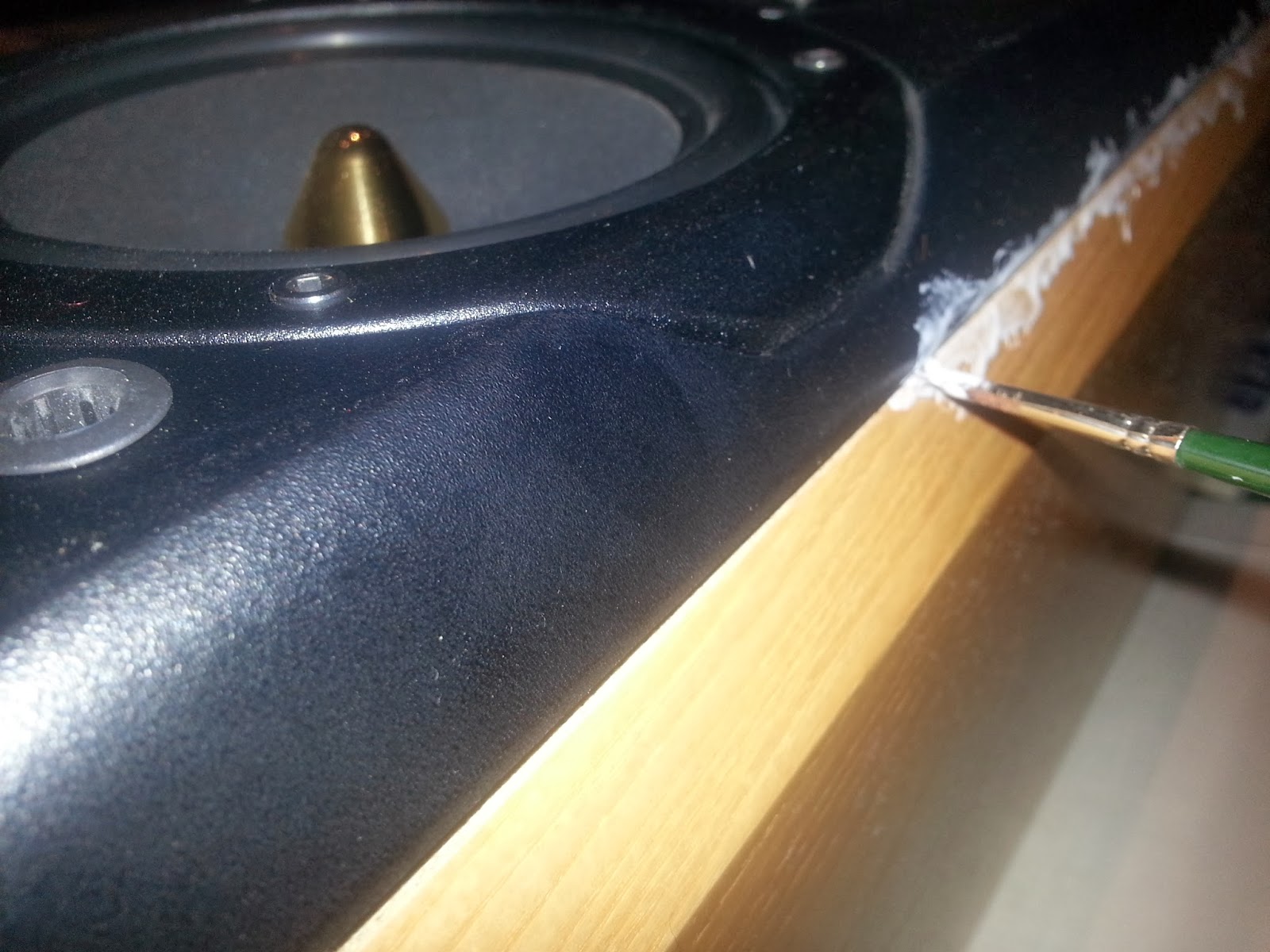 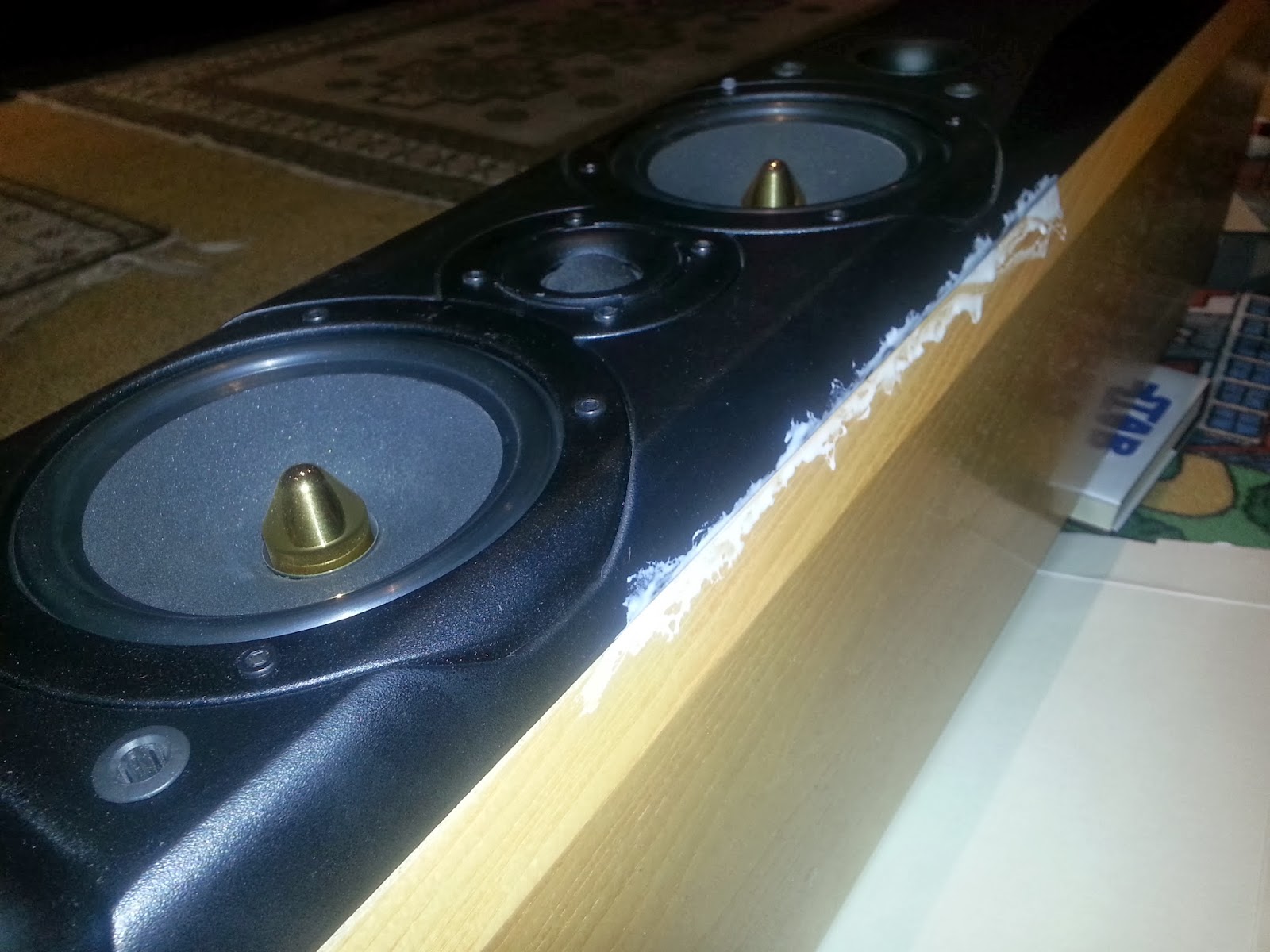 Once I'd got as much of the glue into the groove as possible on one side, cleaned off the majority of the excess glue then started on the other side, cleaned that then across the top.

Then, on went the pile of books, as close as possible to the top of the baffle and absolutely nowhere near the tweeter.  Reassuringly, lots more glue oozed out of the joint when the pressure was applied - meaning there should be plenty of surfaces gluing together in there. 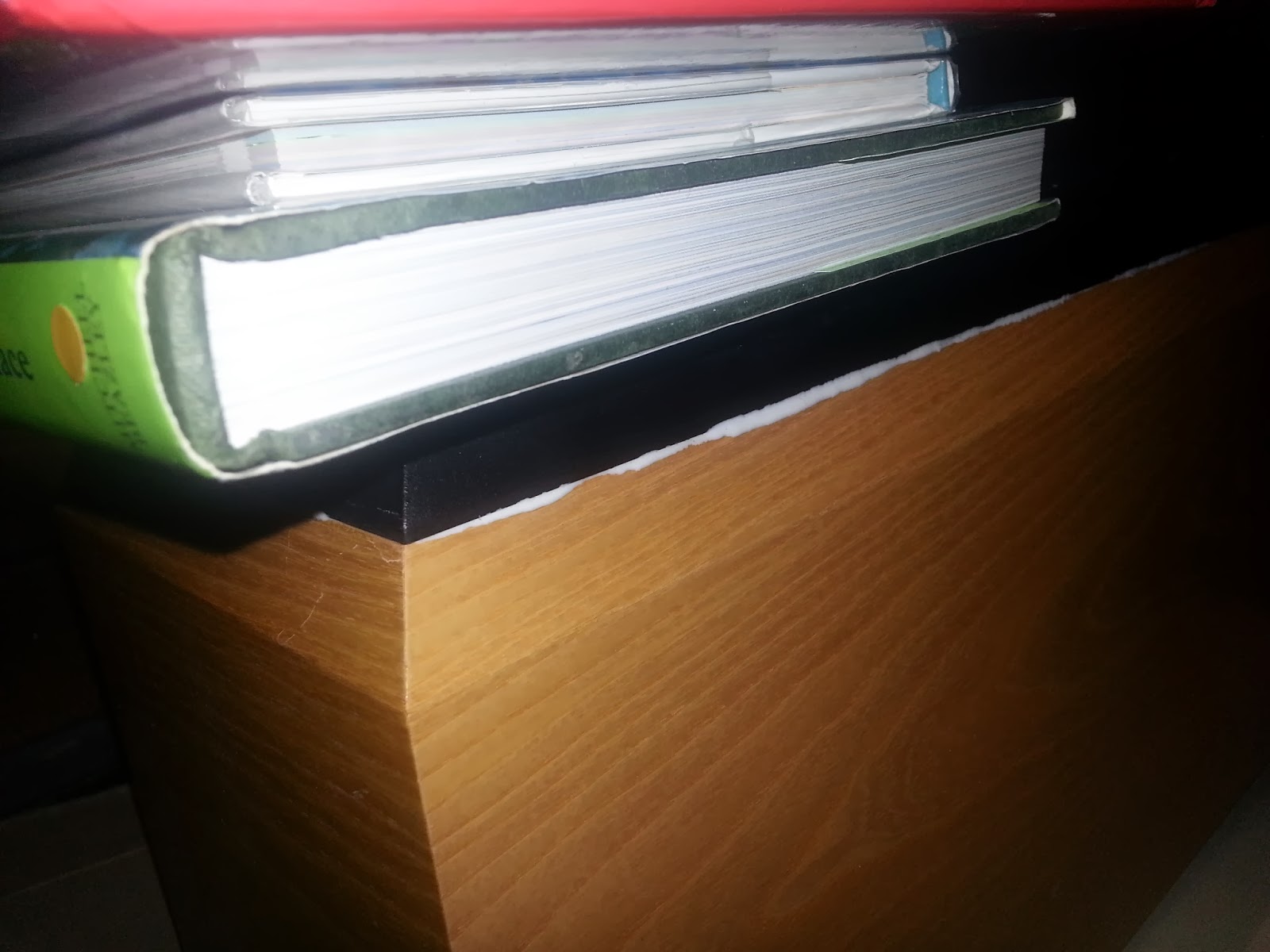 Another good clean all around with a very lightly damped cloth, twice and then dried it all off with kitchen towels.  Its really important to get as much PVA glue off as possible - preferably all of it - as the slightest bit remaining will be very visible as what appears to be a slightly different finish to the wood or the plastic-like coating on the front baffle.

So fingers crossed now, as the speaker has a 24 hour lie down whilst the glue sets: 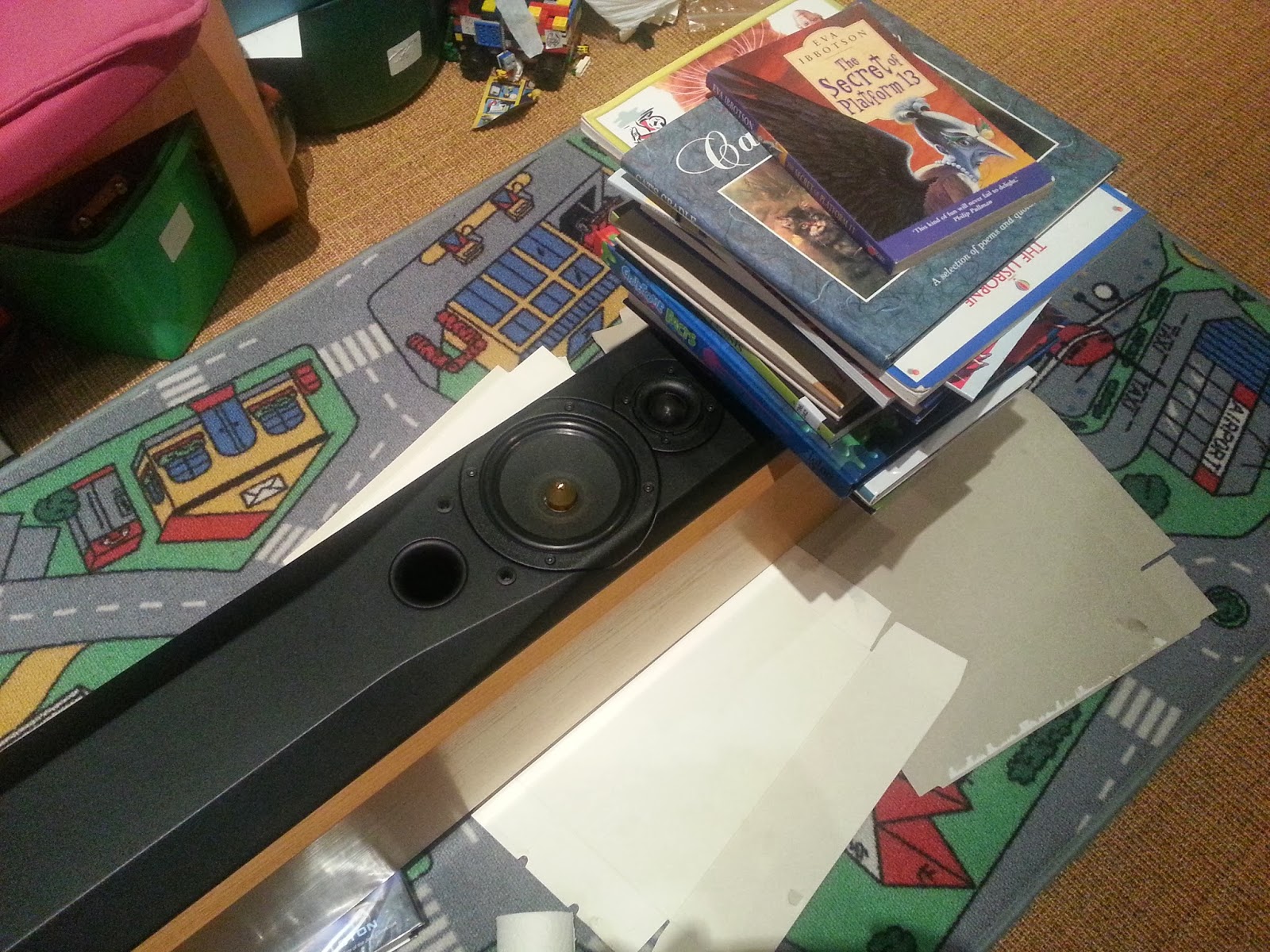