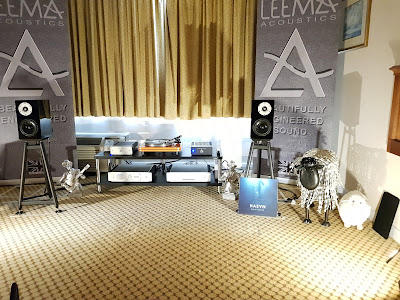 Riffing on the South Wales origin of the Leema Electronics (sheep on the right) and the New South Wales origin of the Brigadier MU.2 speakers (inflatable kangaroo just out of shot on the left) the Leema team brought a bit of fun to Bristol.  But they also brought a couple of other things - a seriously good sounding system whether using the Leema Sirius streamer / library or the turntable and a wide range of music choices.  This system has lots of get up and go yet without giving the impression that it would be tiring to listen to over a longer period. The Tucana II anniversary edition amp had plenty of grip on the little standmounts that are very dynamic yet deliver plenty of nuances in the music. I have to say that the room host was mixing it up with the music too - I went into this room 3 times and not once was there plinky plonky jazz.  I first heard the album "Eyes Closed" by Haevn in this room - it featured in a couple of other rooms too - decent chill out electronica with a hint of London Grammar. On one occasion U2's Zoo Station was to be enjoyed - not a "hifi" track at all - and that demonstrates the confidence in this room - it was the music that took centre stage. U2 was followed up by the Cambridge King's Singers delivering an accapella version of Good Vibrations. Variety.  Leema clearly knew that their system was musical and had the confidence to demonstrate is abilities. 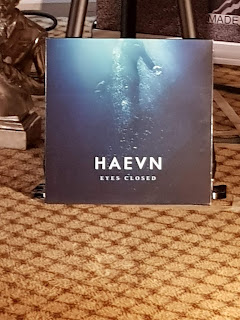