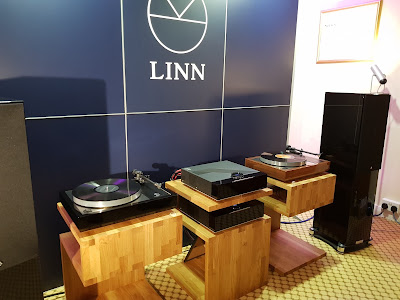 Scottish Linn Products were back again this year - after their re-appearance in 2019 was preceded by a long absence from Bristol.  It was possible to book in advance for their scheduled demos - with a choice of 25 mins of streaming or 25 mins spent with the long lived LP12 turntable in various iterations.  Musings spent time at the streaming demo and an exclusive play of the new Series 3 wifi speaker in stereo operation.  Thanks for that extra time Linn.
First a bit of news on Sondek LP12.  In 3 years time it will be Linn's 50th anniversary, along with the LP12. A remarkably long standing product, but one which has continued to evolve over that time.  Launched at Bristol is a new range of finishes - RAL colours are now available along with gloss finishes for colours and natural woods.  Nice to have so much choice.  Also, there will be more product developments later in 2020, but no further details just now.
On to streaming - initially a Series 3 speaker was playing quietly and was introduced, but then straight on to the Selekt.  This one box modular solution is streamer, pre-amp, DAC, Exakt hub, power amplifiers and more.  Now it receives signals over wifi and bluetooth too.  The demo was between 2 versions - one with the "entry" level DAC, the other with the "Katalyst" DAC option.  A couple of tracks were played and the difference was quickly obvious - the standard DAC is good, the Katalyst is very good - there's no point in listing what's better about it - its just everything. Simple.
Worth noting that Linn were making the room an all Scottish affair - Atlas cables (yes, Linn were using third party cable upgrade products) and Fyne loudspeakers - all of these made in the Glasgow area. The Fynes are the floorstanding F502 in SP guise which has upgraded drivers over the standard model.  These have been measured for Linn's "SPACE" room optimisation software and the next demo was a track played with and without the optimisation.  Again the benefits were clear, literally, in the way the boominess of the room was tackled, letting the music play more clearly - across the full range.  I'd really like to see Fyne and Linn collaborate together and produce an Exakt version of this speaker - it sounds extremely good for its price bracket with a good strong, taught and deep bass line, something that has been lacking in some other Fyne speaker designs.

Finally there was a chance for musings to hear the new Series 3 standalone speaker in stereo mode.  The primary unit is £3k and does the control work - partnering it with the £2.5k auxilary speaker is but a moment's work.  Whilst the speaker itself is capable of streaming from ethernet or wifi, when in a pair they use a Cat 5 cable to transfer Linn's proprietary Exaktlink communications.  They're designed to be used in kitchens, dining rooms and bedrooms really, not as a main system, but to do so in the highest quality possible in such a compact package. A couple of things help with these less than ideal placements - the cabinet is very inert, constructed from something rather like corian, plus, of course, Linn's SPACE Optmisation capabilities.  In single speaker mode the sound from this wine glass shaped unit is very enjoyable - musical.  It doesn't go particularly deep, but its impressively deep for such a compact design.  Pair it up with its auxiliary partner and the sound fills the room very well - its tuneful and works very well with music and speech that are probably suitable for the intended locations.  Only when we wound up the volume with some bass heavy Yello did things feel compromised.  So its good for the job its intended for, and it might make an interesting rear and side speaker in a Linn Exakt surround system too.