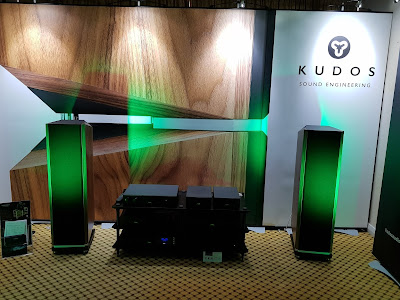 A new product and a new approach from Kudos this year at the Bristol show.  Fittingly highlighted in green in keeping with the Naim electronics, Kudos brought their Titan 707 for us to enjoy.

As is now the norm for Kudos show demos, the Titans were running active. Sometimes its Linn Exakt, sometimes Devialet Pro but more often its Naim with the SNAXO active crossover dedicated to the Kudos range. But this time there was a twist.  Normally we would see Streamer to Pre-Amp to SNAXO to power amps to speakers.  But Kudos have spotted an interesting opportunity in the way that Naim cabling works.  They presented a system here that used an NDX2 streamer, a SuperNait 3 integrated amplifier and a 250DR power amplifier. I'm not quite au fait with the way that this is strung together, but its suffice to say that its possible to split out the pre and power sections of the SuperNait so that it acts as a full range pre-amp but the power amp is only looking after, for example, the bass output (as it was here) from the SNAXO whilst the 250DR gets on with looking after the treble drivers.

This is pretty significant as it reduces the cost of entry to an active system and brings SN3 owners into the equation in terms of upgrading to active - they no longer have to move on from the SN3 to a new pre-amp and 2 new power amps - adding the SNAXO and one more amp is enough - and that could even be a used 180 or 200 to keep the costs down further.

Music was coming from the local Innuos Zenith server or from the Tidal streaming service.

Enough of that - how did it sound?  Well, great. Very very easy to sit and listen to all sorts of genres - which of course Kudos were confident enough to deliver.  The audience being encouraged to request tracks too.  All of this musicality meant that it was often difficult to get into the room as many visitors will have been happy to absorb the tunes for longer than in other rooms. Sitting in the front row made the system sound a touch light and in the second row a touch boomy so clearly this was a room effect and the best seat would've been midway between the 2 rows. Its difficult to write much more about this system, it just got on with delivering the music without any obvious issues nor with any outstanding areas - other than the outstandingness of its total confidence in delivering the goods. 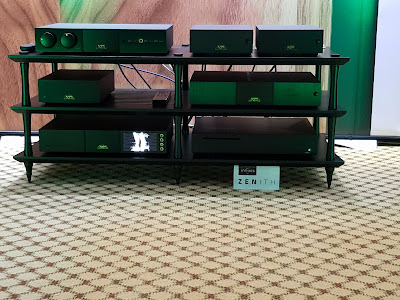 For those of you who are Naim cabling aficionados, you might be able to work out the signal from SuperNait 3 to the SN3's HiCap PSU to the SNAXO and its HiCap PSU and then to the SN3's Power Amp section and the 250DR Power Amp. For those of us who are mere mortals, just be sure that it works and that someone else could probably get it to work for us! 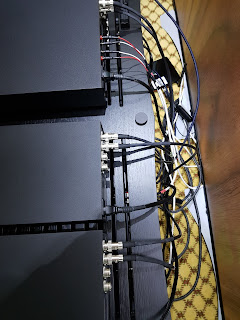 Newly (quietly) announced at the show from Kudos is their own brand of speaker cables.  They're 18 strand silver plated copper and derive directly from the cables chosen by Kudos for the inside of their products.  No news on price at this point. 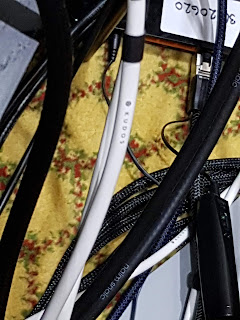 So, sound of the show for Kudos this year, and an honourable mention in the "music of the show" category too - a good variety being played and the audience being asked if there was anything they'd like to hear - the way the music should be at shows.