PMC have taken on distribution of Martin Logan so they were added to the demonstrations scheduled by PMC and in their static displays.  I liked the idea that PMC had listed their demonstration schedule on the door outside the room - so you could choose which product you wanted to hear and slot it into your tour of the hotel - even better would be to publish this beforehand :) 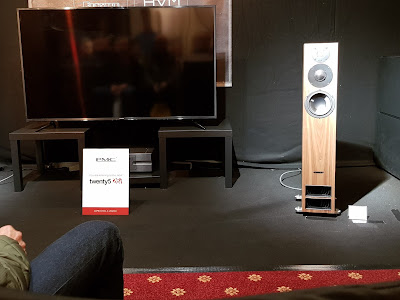 So I visited the room at a fortuitous time as the top of the line in the latest in the Twenty5 series iteration was playing.  The new Twenty5.xxi range is a development of the popular Twenty5.xx.  There's a new tweeter based on the FACT design, some tweaks to the crossover and some work to reduce cabinet resonances. Without the benefit of direct comparison with the previous range, its fair to say that they Twenty.26i was sounding good in what is a pretty large room. The front end was a Bryston digital player and large integrated amplifier.  The music was engaging, well controlled and the sound was even across the frequency range.  Also on show, see below, was the rest of the "i" version of the Twenty5 range. 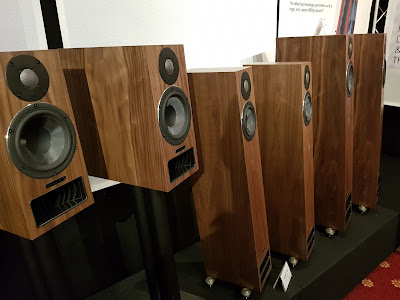