It could finally be happening.

Perhaps the flood gates will be opened.

There's a potential explosion in the offing.

For a while the audiophile community has been listening to "better than CD quality" high resolution music.  In simple numbers terms, a CD is always recorded at 44.1kHz (every second of music is sampled 44,100 times per second) and stored as a "word" comprising 16bits of digital information.  Most studio recordings are made at 96kHZ (96,000 samples in a second) and 24bits of digital information.  So the studio recordings sample twice as many words and the words can store thousands of times the information in comparison to CD.  Studio recordings are compressed down into the CD format.  So CDs are effectively a compressed format, never mind MP3!

There are many factors that affect audio quality, particularly the diligence of the production and engineering teams.  However, if we are to assume that a good team is in place and is capable of producing an album that sounds great on CD, then theoretically the 24bit, higher sampled version should sound better.

A number of audiophile companies (e.g. Linn, Naim, Devialet and others) have produced players capable of reproducing these higher quality audio files for up to 6 years.  However, that hasn't lead to a vast array and choice of widely available sources of music in the higher resolution formats.  Linn Records, Naim Label, Bowers & Wilks, HD Tracks and Quzbo have soldiered on, adding a couple of albums to their repertoirs per month.  Even some of this is of dubious origin with some files being alleged to be merely upsampled CD quality recordings - I'm not saying all of these providers indulge in this, but it pays to take care.  In the last 2 years, mid-range manufacturers such as Marantz, Pioneer, Cambridge Audio and others have added this high-res capability to streamers, CD players and AV receivers.  So you'd think that we'd be seeing lots and lots of choice of music in the market, but it just hasn't happened yet.

However, according to news in What HiFi magazine, we could see this change significantly in 2014 and the following years.  Sony has just announced a full range of hi-res capable products, including a Walkman and, most significantly, a high-res download site - at the moment this looks like it will be a gateway to existing sites.  With the vast range of source materials available to Sony, this could be the tipping point -hopefully they will start to release their catalogue in hi-res.  I'll watch this with great interest!

http://www.whathifi.com/news/sony-launches-high-resolution-audio-product-range-and-hi-res-downloads-site
Posted by Neil Hallworth at 15:15 No comments: 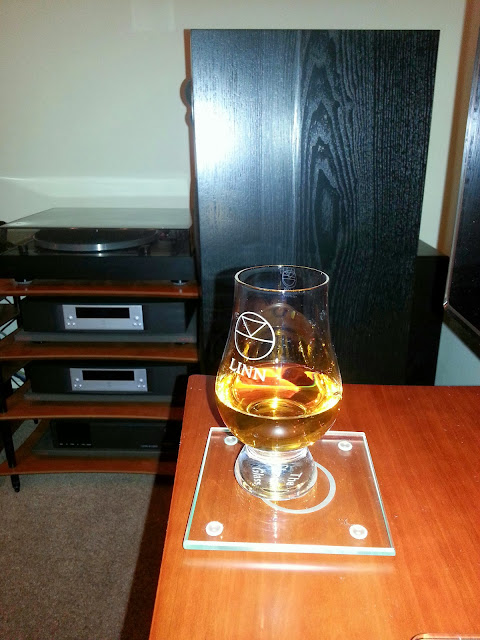 Posted by Neil Hallworth at 12:14 No comments:

Thanks very much to Peter of Linn specialist Cymbiosis who has kindly provided permission to re-publish these pictures.


And here are all my own photos collected into the one post: 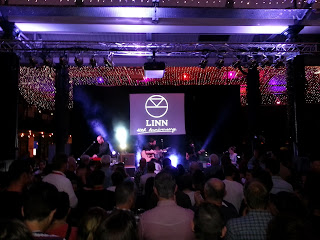 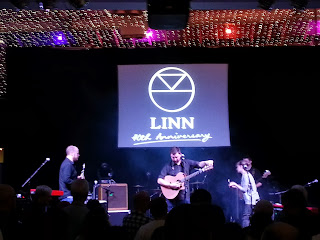 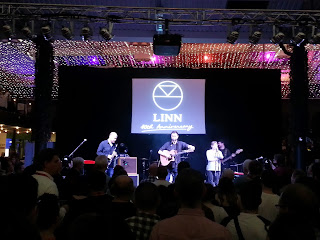 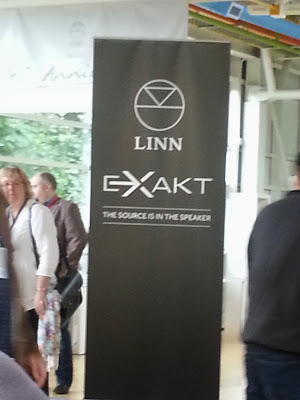 Posted by Neil Hallworth at 08:43 No comments:

I've been thinking about the Exakt strap line - the source is in the speaker.  As in the digital data file gets all the way to the speaker (the file being the source) without being corrupted or distorted, then the Exakt module does its stuff to turn this into analogue and amplifying it before this signal goes to the drive units.  Of course this doesn't make quite as much sense with a turntable as a source, but lets just think about purely digital systems for the moment.

So, "the source is in the speaker" could be a great way of justifying why upgrading the speaker end of things is going to make sense in an Exakt system, and allows Linn to keep to its "source first" message at the same time.

I suspect, after November, it will make sense for the next product to be released to be for the Akubarik.  Its their latest design, will have been in design and development in parallel with Exakt and has a very conveniently shaped electronics module to sit on the back.  So what will be in that module?  An Exakt engine, DACs and power amps, just like the Exakt 350 module.  Also given how recent the Akubarik is, there needs to be an heavy discount for those trading in their Akubark Active module.

However, what range "level" will those DACs and power amps be?  Will they be Klimax level or Akurate level?  This is where I think we will see range differentiators in the future.  And it would make sense, with the first Exakt module for the Akubarik to be at Klimax level (because the work is largely done already for the 350).  So KEDSM and Klimax Exakt Akubarik and a very attractive trade-in deal.  Then the next release could be the first Akurate Exakt module for the Akubarik so your system would be KEDSM, and Akurate Exakt Akubarik, also needs to have a great trade-in deal.

Given that many of the speakers will need refreshing over the coming years, this is how I see that modules and speakers can be upgradable in the future, without changing the EDSM along the way.

So you want to upgrade your source (Linn's long term philosophy) then you upgrade your speaker components.  As all of the current speakers are replaced over time I can see that they will follow the Akubarik design path.  The aluminium rear module for the Akubarik is just an extrusion cut to length. It has very flexible mounting points for the electronics inside.  So various lengths of this module are easy - to suit the cabinet heights of future speakers.

Same thinking for the Tunebox of course too, but applied to the older speakers and really only consisting of software variations through Konfig.  The idea that this is upgrading your source doesn't fit so well here, but it does work very well with the commitment to support customers in upgrading and extending the lifetime of their products. So:

All of this can be very modular indeed, from an hardware design perspective, keeping flexibility up but cost down.
Posted by Neil Hallworth at 00:06 No comments: 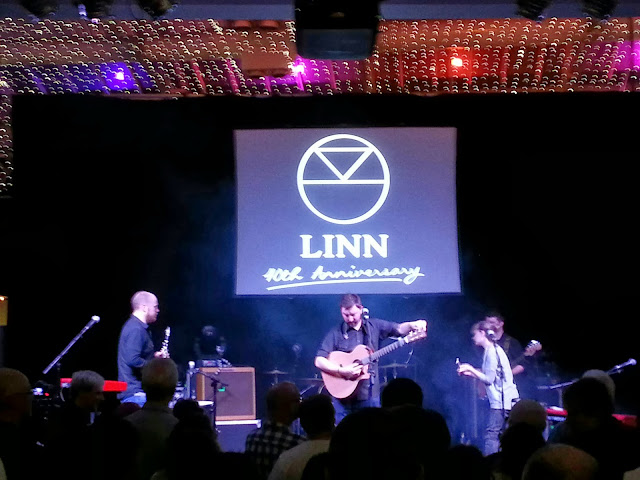 Posted by Neil Hallworth at 13:00 No comments:

For each of the 300 visitors to Linn's 40th Anniversary celebrations this weekend, there was a parting gift.
A vinyl copy of the 40th Anniversary Collection Linn Records album and a rather nicely packaged Linn branded whisky glass and 50ml of 12 year old Highland Park.  Very generous. 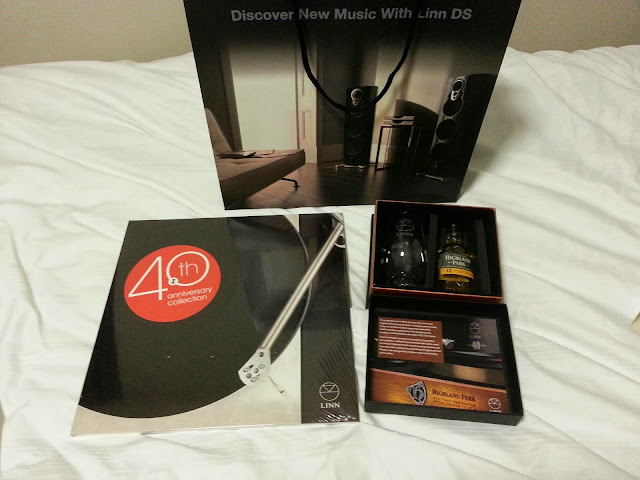 Posted by Neil Hallworth at 09:18 No comments:

The basics of Exakt:

A new type of DSM that accepts analogue and digital inputs.  Analogue signals are converted to digital (yes, including the Sondek!).  The Exakt DSM translates the data into Exakt Link format and sends this to an Exakt engine which can be either inside an Exakt Tunebox or inside an Exakt active loudspeaker.  The Exakt engine knows which speaker it is inside so takes that signal from the Exakt link and then decodes it into the correct frequency bands for each drive unit inside the speaker.  Each frequency band is then fed to a dedicated DAC and power amp for each drive unit.  Volume is controlled by the Exakt DSM but applied by the Exakt engine in the Tunebox or speaker at the last point in the digital chain before it goes to the DACs.

The Exakt engine is capable of correcting for manufacturing variation in the speaker drive units, 0dB distortion frequency crossover filtering and, by delaying some of the signal, 0dB phase distortion too.  It can also be fed room dimensions during installation to compensate for the type of room modes (typically heard as bass boom) expected for that size of room.


Individual clocks in the Exakt engines. 1.8 nano seconds clock sync accuracy. This is equivalent to getting both speakers located to within 1/100th thickness of sheet of paper distance from the listening position.

Speakers have an Exakt engine inside (to decode its signal from the Exakt Link and to filter the signal into individual frequency bands) which then feed to a DAC and amp dedicated to each drive unit.

Pricing At Launch (from a dealer conversation and updated during the week after the launch through Linn forum posts by Linn employees, not officially provided by a Linn presentation nor on their website at time of writing):

KEDSM and upgrade to existing 350 speakers £25k
A KEDSM and 2 x Exakt Tuneboxes will be £26k for owners of Keltiks or Komris
No official word on the cost of a KEDSM on its own at the moment, but word from Linn employees on the Linn forum that it will be "substantially less than the current KDSM" - so that means under £13k then

Exakt will be available in stand alone version for older speakers as an Exakt Tunebox which will contain an Exakt engine and 6 channels of DACs. Komri and Keltik for certain in November.  Other Linn speakers to come, but no schedule released at this point.

Possibility of Akurate and Majik versions later, but no definitive statements yet.
Posted by Neil Hallworth at 06:33 No comments:

Email ThisBlogThis!Share to TwitterShare to FacebookShare to Pinterest
Labels: 350a, Exakt, KEDSM, Linn 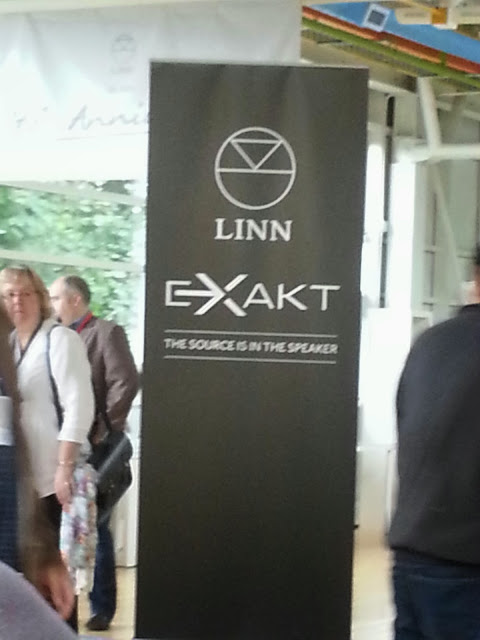 Posted by Neil Hallworth at 06:24 No comments:

Exakt - Initial News As It Is Announced

Exakt KDSM has analogue, digital and ethernet inputs. Only ethernet style outputs. Cat5e cables to speakers.
Speakers have DAC and amps.
Software driven room compensation to adapt the speakers to the room and to compensate for manufacturing varations in speaker drive units.
£ 50k for KEDSM and a pair of 350 Exakt speakers 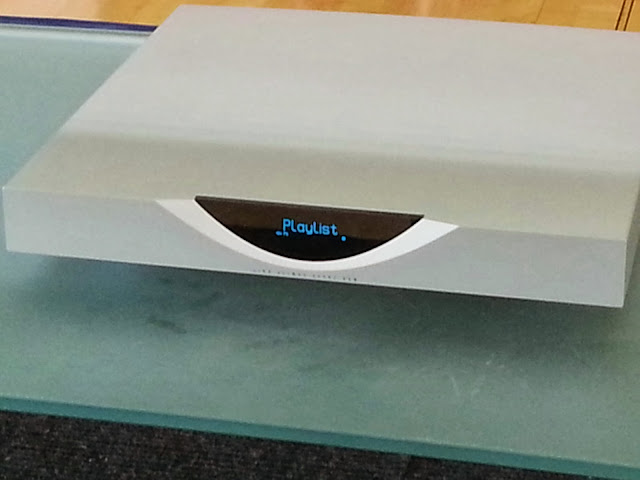 Posted by Neil Hallworth at 03:42 No comments:

Established in 1973, Linn is celebrating its 40th Anniversary at the factory this weekend.  Via some communications on the Linn forum I was fortunate enough to secure a couple of tickets (thanks very much Dan Steel).  Here are some notes and pictures from the event.

Around 300 visitors had a choice of various presentations and listening sessions through the day.  An opening address by Ivor Tiefenbrun at 11:00 and a major product launch (see the above posts about Exakt) at 14:00 were "compulsory" attendance events.  Throughout the day there were presentations on the history of Linn Records, how Linn Records records an orchestra, meet the engineers (speakers, control software, LP12 and DS sessions available) and various music playing sessions in the Linn Home dem rooms.  Tours of the factory were also bookable.

For us the party started with a listen to the Highland Park LP12. The plinth is made from lids of oak whisky barrels which could be up to 200 years old.
Due to the different material the plinth is made from 4 separate pieces of wood rather than being assemled from 4 pieces cut from a single piece.

Only 40 produced.
Includes all the top end kit such as Ekos SE, Uphorik, Radical etc.  Also includes a bottle of 40 year old Highland Park in a presentation case.
Rumour has it that they sold out over the weekend (although, as dealers have to buy their kit from Linn, not all may have found a final home yet).

Sounded nice enough, but still vinyl with its inherent surface noise problems (although, of course, at this level surface noise is very much reduced).

Of all the dems in the Linn Home (main room and the 2 lounge size rooms at the back of the building) were less than brilliant - I don't think this facility does the systems any favours - the Akurate room with the Emily Barker demonstration was the most enjoyable.
Posted by Neil Hallworth at 02:48 No comments: