Still haven't got the decorating finished so this isn't in my active Keilidh system, but when the AV5125 arrived over the weekend I had to get it out to give it a test.

The end game is to use 8 channels of AV5125 and C5100 to power my tri-active Keilidhs and bi-active Centrik and compare them against my current many box collection of Cyrus amps.  Then decide which to keep - Cyrus or Linn.

So for testing purposes (to make sure the AV5125 was fit and well) I rigged up the Akurate DS/0 Dynamik with volume control into a couple of channels of the 5125 into the second system's Mission 773e floorstanders.

All is well with all five channels of the 5125.  But the temptation to compare against the C5100 was too much, so it came out of its box too.

The differences (as revealed through the Mission speakers which will be a limiting factor to some extent) are reasonably subtle.  I expected the 5125 to be much weightier than the 5100 and initially this seemed to be the case.  But a little longer listening shows that actually, the 5125 is putting a "bloom" around everything from the bottom up to and including male vocals.  Switching to the C5100 gave just as much depth, but the bloom or muddiness was gone.  Another benefit of the C5100 was the resolution of cymbals.  Using the track "Death Will Be My Bride" by Brendan Perry - I know, I live a cheerful life! - there is a very complex cymbal sequence in the last 90 seconds or so of the track.  The 5125 sounded like it was very detailed in this section, but switching to the 5100 shows just as much detail but by far more control - a lot of splashiness disappears.

So, the 5100 is sounding better through the Missions.  Its not a massive difference and most of it is in the treble so I'll be putting it on the tweeters in the active system.

Will report back on the Cyrus vs Linn amps in a few weeks when the room's all back together. 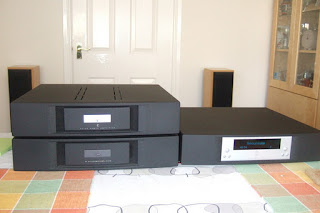 Posted by Neil Hallworth at 23:58 No comments:

I've put some spare, hardly used gear up for sale on ebay.  All immaculate and boxed:

All sold now, thanks
Posted by Neil Hallworth at 16:27 No comments: