Did you ever go to a gig not quite knowing what to expect?

Better than you'd hoped for?  Worse than you could've imagined? So bland as to not be worth the bother?

All possible outcomes.  So how was it when Audiophile Musings was subjected to 3 hours of electronic sounds in London, imported for one night only from New Zealand?  Did the experience of being one of Pitch's Dance Test Dummies turn out to be pleasant, euphoric, painful, uplifting or just meh?

There's something about a venue that works. Or it doesn't. And it works or it doesn't, depending on who's playing there and who's in the crowd.  Pete Tong and the orchestra playing Ibiza classics needs a vast space and a few thousand party animals to make the gig work - put it in a venue where the orchestra might outnumber the audience clearly isn't going to work.  But equally, put a solo female singer songwriter in a venue of just a few hundred people doesn't work either, if the audience are only interested in the sounds of their own voices.  So a venue has to work for the gig, and the gig has to work within the venue.  And yet it must be so difficult to know what's going to work.  A while back I went to see/hear Kiasmos at The Royal Festival Hall - a very large venue more commonly known as a classical venue.  But for a duo playing keyboards - that just didn't seem right, yet by the 3rd track in the place was on its feet and it felt more like an superclub in Ibiza.  But without the bar prices.

What's that go to do with being a Dance Test Dummy?  Its about the contrast.  The last duo twiddling knobs and standing behind keyboards I saw live was that Kiasmos gig.  This time around it was the turn of Pitch Black - another duo twiddling knobs and standing behind keyboards playing live.  They formed in New Zealand just over 20 years ago, so I don't know why its taken until 2018 for me to discover their music, which is very much my kind of stuff.  Rather in the manner of PB being from the Southern Hemisphere and Kiasmos originating in the very northern parts of the Northern Hemisphere, so their London venues came from the opposite ends of the spectrum.  PB were choosing a live London gig in October as a chance to run some new tunes past the critics (their audience) and the basement at the Sebright Arms, in the oh-so-cool Northern part of the capital's heart, stretches to an audience of about 160.  That's intimate.  And dark.  A small room with a low ceiling, a small step up about 2/3 of the way back from the stage and a bar with just the essentials across the rear.  The stage is only about 18 inches high.  Very friendly folks at the Sebright Arms, much friendlier than the usual London grumpy pub staff.  The pub's OK, the food was OK, but all the trad ales were off for the evening, which was a bit of a downer.  So I tried the local craft lager which was acceptable, nothing spectacular.

Don't know much about Pitch Black?  Me neither, or at least not up until earlier this year.  I heard about them through one of the forums - in one of those "if you like that you'll like this" kind of threads.  I mention Kiasmos above and I'll mention Yello now too - because if you like either or both of them, then PB are worth a listen.  Take care on the likes of Tidal though, as you might run across their US namesakes who are gangster rap-ish and very different indeed.  You can sample some PB over on Soundcloud too.  A quick chat with Michael Hodgson (the local) and Paddy Free (from NZ), who make up Pitch Black, before the gig proved how easy they are to chat to, both of them also being Yello fans.  Paddy is very easy to talk to and genuinely interested in their audience, and very good at predicting their behaviour.  His prediction: "They'll come in after the gig has started and then gradually fill up the room from the back" was spot-on. 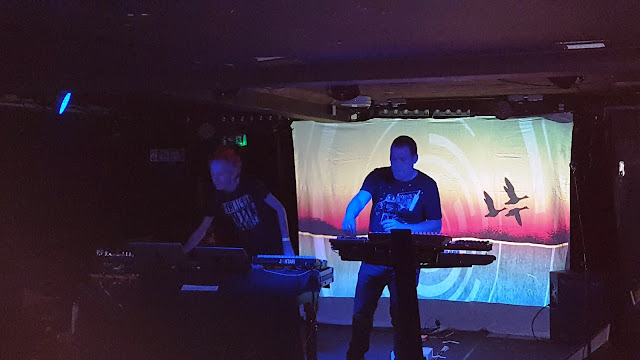 The set was broadly split into 3x 45-50 minute sets.  No support. The first set was the "chill" session, and that was exactly how the audience gently and politely settled into it.  The room gradually filled up, but the space between the stage and the step up filled up in a very relaxed way - almost everyone cross-legged on the floor.  As Paddy put it "welcome to the great Pitch Black sit-in".  Apart from one or two lines like that, the boys just got on with the chill play out for the first 50 minutes.  And its probably about as laid back as it gets.  This isn't ambient as such, there's more direction to the set than that - its possibly better described as ambient sounds but with a beat - sometimes a little dubby, other times trancey, other times rather like a slowed down house style.  And what a fantastic sound system for this kind of music, in such a modest venue.  The PB sound is very reliant upon waves of bass lines and rhythms - something that could very easily have been a massive wallowy mess of sound from a poor sound system.  But this little unassuming venue in London did PB proud.  The bass was massive but decently controlled and filled the venue with waves of sound.  But it didn't drown out the rest of the music, which is essential to the structure of the sounds - there are so many little short sharp chords, injections of quirks, cracks, sparks and subtleties that make the music what it is.

The guys are animated behind their keyboards, pads, screens and other gizmos.  But they're clearly very comfortable working together on whatever it is they're doing with all the gear.  In line with the vibe of the laid back first set, everything was quite calm up on the stage.  The audience swayed along, some with their eyes closed, some chatting quietly.  Perhaps those who have seen PB before already knew that the chill session was the prelude, the amuse bouche rather than anything like a substantial starter, never mind the main course.  As it happens, there were 2 main courses tonight, although I'm pretty sure the first of those could've left a bad taste in the mouth as it was dubbed as the "Dance Test Dummies" set  - essentially all new tunes for 50 minutes, unreleased material, and still not finalised.  A risky business for PB and the audience.

But there was nothing to worry about here. Introduced by a short video, now Hodgson and Free are getting truly animated behind their gear, and you can see that there are tweaks and adjustments going on throughout the set. The backdrop is a mezmerizing set of loop-style visuals. The pace steps up several gears, the audience gets to its feet and I realise that the place is now packed, starting to feel like a sweaty nightclub.  And boy does the pace ramp up - BPM and sheer energy in the room.  Did the Dummies in the audience crash like those in the video?  No, they seemed to love every minute of this set like it was all familiar and favourite stuff.  The tracks rise and fall, build and break, push forward hard but not relentlessly.  There's always a new twist just around the corner and the amount of twiddling and crossing of arms across the gear hinted at the amount of work being put in - there's clearly a mutual trust and spark between Free and Hodgson as they energetically drove the set along.  It feels like this is a new album ready to go - just bottle up that set from Sebright and stick it straight onto a music carrier format of your choice.  Apparently there is more work to finalise some stuff, but it really didn't feel that way - and the whole place was in tune with the new material.  Bring on the new album asap.

And onto the third set - essentially the "greatest hits" portion of the gig, modestly introduced as "some stuff you'll be more familiar with", or words along those lines.  Unfortunately, due to some complex travel plans I had to dip out about 20 minutes in, much to my annoyance (I had apologised for my early departure to the boys before the gig, so they knew my walking out early wasn't an expression of the quality of the gig!).  As I tore myself away (I did, for a short while contemplate missing the train, but the consequence would be a £70 Uber fare so that got the upper hand in the decision making) the place was still bouncing, lost in the moments, feeling the bass lines and full of positive energy.

One further comment on the sound system (as that's the main theme of the blog) - I did notice the physical impact of the bass lines in my stomach and the movement of my clothing, yet on leaving the venue there was no ringing at all in my ears, and impressive achievement.

The North West Audio Show for 2019 continues to be at Cranage Hall in Cheshire and is set to run over 2 days on the weekend of 29/30 June.

Audiophile Musings considers this to be the best of the UK commercial shows.

Here are some of the reports from previous years:

Show website HERE
Posted by Neil Hallworth at 13:14 No comments: