Now to focus on the speaker chambers.

Another bit of online shopping snagged some self-adhesive sheets of sound deadening for £8 to help with damping the panels - I used these on all the speaker chamber surfaces that had room for them.  I also used a set of 4x 40mm Polipod feet underneath to both raise the box up to allow airflow, and to try and stop energy going into the surface on which the box is going to stand - typically this will be a table and they're horrible when they start vibrating along with music.  The Polipods were drilled and screwed to the underside.

The mid-bass drivers are fitted on the front and the rear with rubber sealing rings, the tweeters aren't. So the drivers were installed into the cabinet (pilot holes being drilled first for the screws), then sealed with clear silicon sealant from inside the cabinet.  Speaker cables from the crossovers are soldered onto the drivers.  The anti-vibration sheets were then cut to size and stuck onto the relevant panels.  Cables were then p-clipped into position and sealant applied to where the cables enter the speaker chamber.

The plan was for the hinged top lid to create a seal to ensure that the speaker chambers were properly sealed to ensure they acted as infinite baffle enclosures. There's a clamp on the box lid, but the wood just isn't flat enough to provide a seal.  A quick search around the garage and an old 700C cycle inner tube was pressed into action.  Halved lengthways, cut to length and stapled onto the box, they provided an excellent seal - the natural curve of the halved inner tube spreading under pressure and completing the seal.  Now, with the box lid closed, pushing gently on one of the mid-bass drivers forces the other mid-bass driver to move in the opposite direction - a sign of a good seal.

Playing some tunes from the FiiO portable FLAC player produced a fairly light, boomy kind of sound - pretty much as you might expect when just looking at the completed box. Another quick Google search reveals that most infinite baffle speakers use polyester as a filling material - just like many a low cost pillow, of which there were a few old ones lying around in the garage - good protective packing when moving stuff around in the boot of the car. One was opened up and the polyester filling teased out (wearing a breathing mask and rubber gloves for this) and each speaker chamber filled with half of the content of one pillow.

Well, this was not a small nor subtle change - more bass, more control, but still boxy.  Another pillow was sacrificed and another improvement noted. A third pillow was pressed into service, and it took a bit of compressing to get this material into the chambers.  But this was very successful - providing much deeper and more controlled bass, with much much less boxiness. So the less than scientific approach of trying different options gave a good final position.


And that was that. One ex-Austrian army ammo box pressed into a new lease of life.  One extremely solid (read very heavy), sort of portable, sort of Linn, sort of Mission, sort of dock.  Which pays music. Very much better than expected.

A very pleasing result, and one that has a nod to its Linn heritage through the use of the "Krate" die-cut stickers (another £5) and the XL label as it's pretty big!

Posted by Neil Hallworth at 15:41 No comments:

So we have a box, some vents, and amp and some crossovers.

Next up was cutting and fitting of the connections panel.  This covers a pair of RCA phono inputs, a combined mains socket / fuse / switch and a USB port for charging.  This was cut from a small black perspex panel, drilled to fit etc.

The panel was then fitted with all its parts and then screwed into the main box.  No sealant necessary as the centre amp chamber is ventilated anyway.

Part Four is here
Posted by Neil Hallworth at 15:11 No comments: 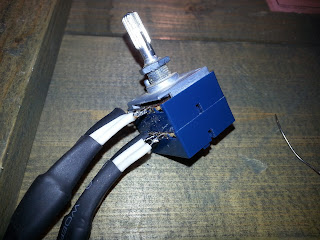 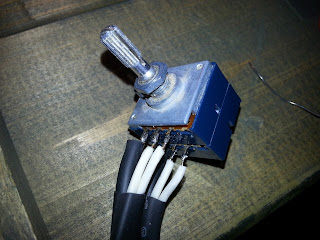 Posted by Neil Hallworth at 14:58 No comments: 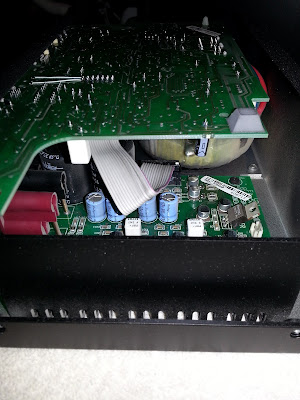 Posted by Neil Hallworth at 14:44 No comments: