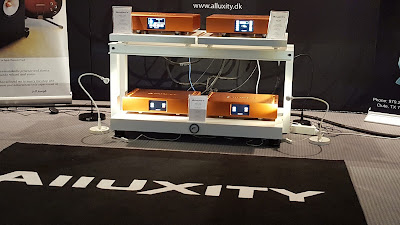 Well I'm a fan of the copper-orange finish on the Alluxity electronics.  Bold and individual without being over the top.  Completemented nicely by the superb finish on the Joseph Audio Pearl 3 speakers.  Here we listened to Stimela on a reel to reel source.  Bass deep and tight, clear vocals and crisp percussion with no muddying during the complex and louder passages.  The feel of the track came through really well, particularly on the sax and vocals.  Very enjoyable. 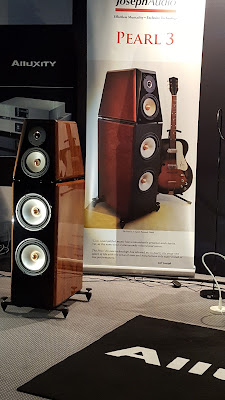 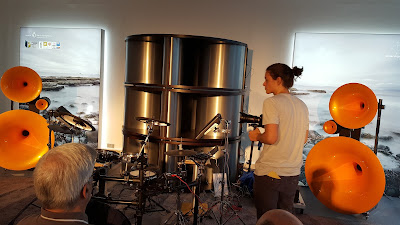 Well, you'd not call this system shy, nor retiring.  The very orange horns flanking 3 vertically stacked sub-woofers.  Argh! Another set of horns that he won't like?  Not at all - a very decent system that played music very well indeed. It didn't seem to matter which source was in play, we got natural, flowing music with any easy to follow tune and excellent, consistent timing.
The system was loud, but only noticable when trying to talk to someone - a very good sign of quality.  Streaming Tocatta & Fugue was at superb scale and effortless. The horns were nicely free of any nasality.  No imaging of note, but a good, confident, mix of music was played.  We were also treated to a live performance by a fully entertaining drummer / singer who used the electronic drums for percussion and for playing as musical instruments to generate a tune.  Very entertaining. 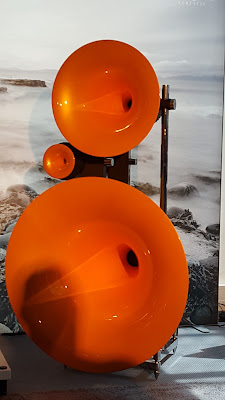 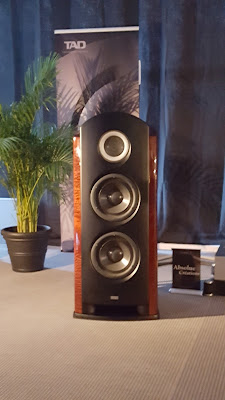 TAD were in a very large room with no obvious room treatment.  They had 2 systems set up - one along the side wall using the standmount reference speakers and the other using the big Euro 87k floor standers designed by Andrew Jones a few years back when he was at TAD.  I visited this room 4 times. One of those visits was when the standmounts were playing and they didn't do anything for me - I find them too bright and hard - much as I've heard them on 3 previous occasions (they weren't designed by Andrew Jones).
The 3 other visits were to listen to the big system with the floorstanders.  Here we have a pretty straightforward digital front end, DAC, pre-amp, monoblock power amps and passive speakers.  Total?  Euro 250k without cables, which I didn't ask about, but they were provided by Absolue.
What did this system do that meant it was worth so many re-visits?  Well, a lot, and very little.  What does that mean?  Well, there was a lot of everything very important - particularly musicality.  Superb dynamics, flow, easy to listen to yet with masses of detail and information coming through. Stunningly deep but controlled, tuneful bass that didn't seem to excite the room.  Muddy Waters' voice was fully of detail and feel, there was so much subtelty in the slide guitar making a song full of meaning and flavour.
Taught without harshness, massive choral scale whilst lstting the soloist stand out clearly.  Bass was huge and filled the room without any notable boominess, all without any obvious room treatment.  As said above, I went back for more and more.  Truly superb - at last a system that deserves the description "high end" and whilst the kit is pretty substantial - its not blingy, it gets on with the important job.  Congratulations TAD. Stunning music. 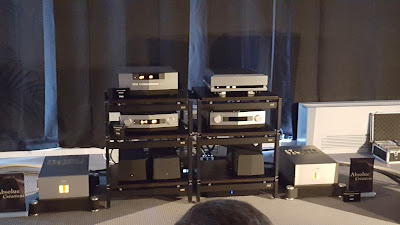 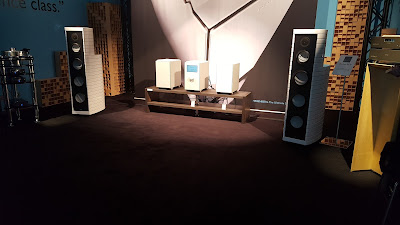 A room that would be popular with Pandas this one.  Whilst quite a few rooms used live bamboo diffusers, Living Voice pushed the boat out here.  It did work quite well actually - at least visually, and probably sonically - in terms of softening the rather functional exhibition rooms. The room had substantial corner room treatment too.  Here we had a Canary Audio CD player, Kondo amplification and the Living Voice Palladians with their matching sub-woofers.  A 7.5k Euro (in Living Voice speak, there should be an "only" in front of that price) integrated CD player feeding 440k Euros of speakers?  Does that work? Apparently, aligning the subs with the side walls is the preferred positioning.

Now, generally speaking, I'm not keen on horn speakers - they often seem coloured to me (some of this is sometimes referred to as honk, as an example), and produce a "forced" kind of sound, but Munich has taught me this doesn't have to be the case - the Living Voice system being a good example. Perhaps the horns I've heard before just weren't expensive enough! 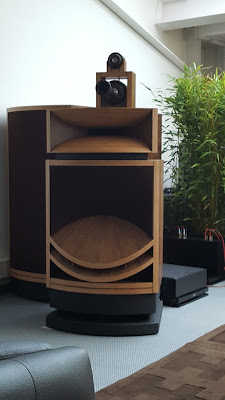 Even though this system is only passive, its 100dB+ sensitivity means that huge sound is possible from a small number of watts (although the subwoofers are driven by their own power amp, it still feeds a passive crossover). What we have here is a system that flows with a feeling of effortlessness. In some ways the bass was a little overpowering in this room - but it wasn't boomy as such, perhaps just needed turning down a little.  This system doesn't slam, nor does it produce much of an image, but it does lots of details, great vocals and there's a sheer presence to the way it fills the room - but there's no shoutiness (and, despite their physical presence that most definitely shouts "look at me") there is no "look at me" feeling about the music. The system gets on with it and gives a warm feeling to the sound - mellifluous might be the word.  There's the sense of a story being told with all the threads being aligned towards a conclusion, if that makes any sense whatsoever.  Jazz, classical, dub worked well - but it would have been nice to hear some rock - I returned twice to this room to check my thoughts and, if they were playing rock or electronic music, I managed to miss it every time.  Worth a listen, but only if you're interested in hifi or have the wherewithal to give them serious consideration, like the recent customer who's ordered 5 pairs...
A similar, but not identical, set of speakers can be heard all day every day at Spiritland near King's Cross in London - so you can listen to them for the price of a coffee, or a beer. 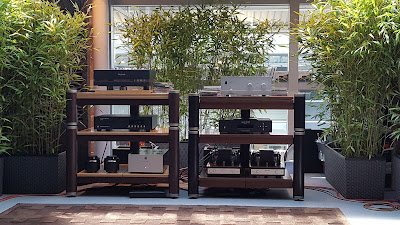 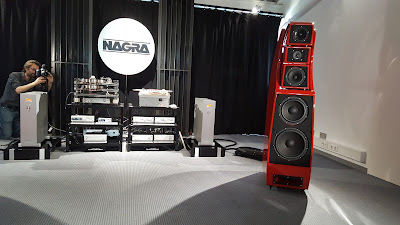 This NAGRA and Wilson system was playing a CD when I was in the room, swiftly followed by the Kronos turntable then the NAGRA reel to reel.  Good to see that the music genre changed each time, in addition to the source.  Some jazz, then classical and female vocals.  Super detailed but not in a false or forceful way and avoiding anything too clinic.  Good sense of timing and reasonable integration into the room which had some but not excessive room treatment (visible either side of the Nagra logo).  Large orchestral works had real scale in the room, but, unlike many other larger speakers, individual instruments were not "oversized".

Kudos are kind of launching 2 speakers at Munich.  Kind of, because the T-707 was "previewed" at Bristol in February and Chester in March in the UK. The T-707 is a smaller take on the T-808 with a single cabinet, a 2-way system with isobaric mid-bass drivers. At 14k Euros it's about 2/3 the price of the T-808.  The second launch was the smaller still T-606 - another 2-way isobaric design which is substantially smaller - being very similar to the Super 20 in size.  This was a "preview" as a higher power handling version of the mid-bass is slated for the production version.  The 606 comes in at around 9k Euros.  The tweeter in the Titan series (which is much more restrained and refined than the one in the Super series) uses the SEAS beryllium frame and motor with the soft dome from the Crescendo. 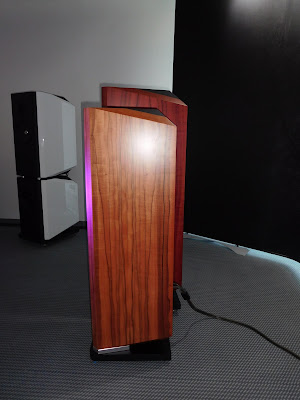 I had the opportunity to select tracks in this room as it was very quiet first thing on press day.  So I sat for a good 40 minutes playing music through the T-606.  Positioning in the room wasn't ideal because the T-707 stood alongside, but even so, this little floorstander put in an exemplary performance - particularly in such a big room.  It's in the same mould as the 707 - it takes everything in its stride and is musical and fun to listen to, whilst seeming to avoid the tendancy for Kudos speakers to be a little over-bright.  The 707 is more open, a little more controlled/taut and goes a little deeper.  If you can stretch to the budget required for the 606 but can't stretch to 707 or don't have room for it, best not to listen...

Looking forward to hearing these with Linn Exakt - hopefully at home - some time soon, but will have to wait for Kudos to get around to designing the crossovers.

(With thanks to Toby at Kudos for helping with charging up my camera). 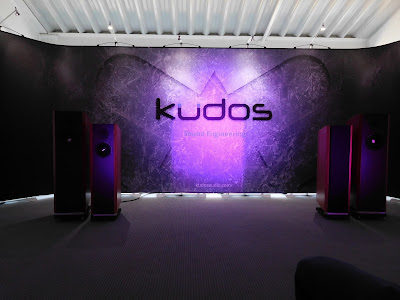