There seems to be a push on Yello promotional activities at the moment.

First the new album (Toy), then the four live gigs in Berlin (see here), a promise of a video of those performances, and then this - Yellosphere, whatever one of those might be.  And there weren't many clues available on the run-up either.  Now, of course, we know that there will be a wider Yello tour in 2017 which at least encompasses Germany and Austria in November / December.

No matter.  Yello, at the Ministry of Sound in London seemed like too good an opportunity to miss, regardless of what was going to happen.  At £15 a ticket and the opportunity to make a first visit to the MoS (tick that one off the bucket list!, tickets were sorted and the rumours and speculation on the Facebook group.  "A celebration of electronic music" was the billing - with news about the DJs featured and Yello's part in the evening gradually evolving and being dribbled out into the publicity in the weeks approaching the event.

With no clues about timing, friend Andrew and I decided to turn up fairly early in the evening so we didn't miss anything.  Which was a mixed blessing.  For those who haven't been to the MoS, it is split into 3 areas - the main bar (with a large dancefloor and, tonight, a small stage), the main dancefloor (The Box) and a smaller side room (Baby Box).  Baby Box was closed all evening and The Box was closed too, at the beginning of the night.

First up was an unannounced DJ (a lack of information was a theme of the night) in the large bar area.  I still don't know who it was, but they played tuneless bass landscapes that the sound system couldn't cope with and which the audience didn't want to engage with. Not a great start.  We went outside in the cold to chat for a while and avoid the boomy bassy mush going on inside.  There followed a 4 piece band "Magnetik North" who mixed folk-ish music with electronic experimentation - interesting certainly, and I've never seen a Theramin in action before. The third act was another DJ in this room at which time The Box was opened up so there were 2 DJs playing at the same time. These DJs were playing somewhat more accessible music, but with the venue finally getting a little busier, expecting a largely middle aged (at best) men to be dancing along was somewhat optimistic. At one point Deiter and Boris were seen mingling with the crowd in The Box, only to disappear upstairs in the main bar fairly quickly.

Just before midnight the Yello boys were seen again on the balcony over the main bar area as they headed towards The Box to do whatever they were going to do. At least some of us knew what was going on now, as rumour had spread that the boys would be "on" at midnight in The Box.  A brief word about the system in The Box - its very capable indeed, 4 large stacks of horns give extremely good sound quality - bettering that at Pacha on Ibiza by some margin. The sound probably does all sorts of horrible things to your internal organs and I'm glad that I no longer own a pair of flairs - the flapping would be dangerous.  Before Yello came on, it was extremely loud - but just about tolerably so.  It was turned up a notch when Yello played which was too loud (the system could cope, my ears weren't so happy) but the after-Yello DJ turned it up again - which was actually painful and the system couldn't cope any more.  What's the point of that?  Do some DJs think a system is only loud once it is distorting?  What could've been a really loud but enjoyable sound was destroyed.  Bonkers.  If you're going to MoS, take some ear plugs, seriously.

So what happened when the boys were up?  Well it was a mixed bag of tunes, video, interviews and a tribute.  Compared by Andrew Weatherall, who also did the interviewing, the boys answered the usual questions and we learned very little more about them.  Carl Craig also payed tribute to the duo.  The boys span a few tunes and videos, Dieter did his thing along with some of the lyrics and in 45 minutes it was all over.  Limbo didn't seem to be anything new (although a trail for the event mentioned a new mix) and the visuals used were a direct lift from the background screen to the Berlin shows.  I'm sure those who've never seen Yello live before will have got a lot more out of the event than I did, but it was rather underwhelming.

As they left the venue a few of us were lucky enough to get to meet the guys at the foot of the balcony stairs.  Boris remembered the collanders from Berlin and both of them were consummate gents again. This time they both signed one of the collanders and that made the whole thing somewhat special and lifted my enthusiasm for the evening.  Afterwards I listened to Carl Craig's set for a while - but it was a distorted sound that was too loud and in 30 minutes he only played one Yello track - another part of the evening that was less than ideal was the general lack of Yello music on offer. 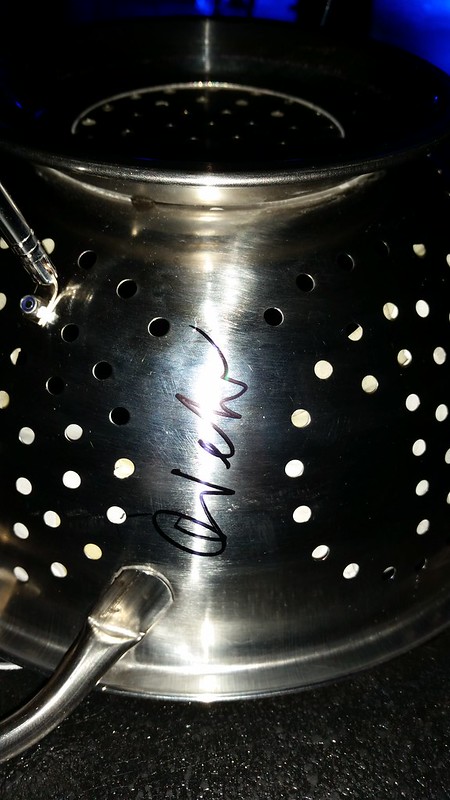 So a mixed reaction to this event really - may be it will be part of an "extra" when there's eventually a video disk release of the Berlin concerts (something to really look forward to).  I'm glad I went, it wasn't too expensive, but it could've been so much more for very little effort.  If all that's going to happen is the introduction of some records and videos, would 90 minutes of doing that be too much too deliver? I suppose, given that I was lucky enough to experience the excellent Berlin gig, it was always going to be difficult to follow that up.  Andrew Weatherall did a good job as compare and it was good to finally see Carl Craig.  Always good to meet Boris and Dieter - I hope they get to the UK with a proper gig in 2017.
Posted by Neil Hallworth at 13:55 No comments: