What's All The Fuss About?

I'm fairly sure that Linn don't launch new speakers very often, the last being the Majik Isobarik in late 2011/early 2012.  Their speakers also spend a long time on the market - 6 years is fairly typical. I also note that the current floor stander in the Akurate range, the 242, is both aging somewhat and, from forum chatter, something that polarises opinions. Ive heard them sounding very good on the end of a fully active Akurate system (that'll be 10 channels of amps), but have not heard them driven passively.

Its worth noting at this point that, with the Majik Isobariks, Linn has returned to a speaker design technique that served them very well in their earlier days.  This is the isobaric principle where 2 bass drivers are working in tandem with each other, the space between them being a sealed chamber - the idea being to get close to double the surface area of a single driver, but without the need for a large amount of front baffle space. This approach was applied to the early speakers such as the standmount Sara and the floorstanding Isobarik. It also put in an appearance in the Keltik which was the top of the range in the late eighties/early 90s. Funilly enough, all of those speakers polarised opinion in their days. The more recent Majik Isobarik doesn't seem to have caused such extreme reactions, but it doesn't seem to have driven much enthusiasm amongst those with cash to spend. Personally, I like their bass, but don't like the way they struggle with imaging nor the strange way they push male vocals back in the soundstage. They're also a visual challenge for me, so I chose the 140 speakers as a preferable set of sonic compromises, at half the price.

That's probably enough background and pre-amble, lets get on with some content. Unfortunately the descriptive element of listening to the speaker will be necessarily brief, the reason for which will become clear soon.

So the "big event" for Linn is the launch of a new speaker in their mid-range, the Akubarik (I don't like the name really - its a bit twee, I thought Majik Isobarik was fine, so Akurate Isobarik would be fine too).  At first this will be an active only offering, with all the active filters and power amps built into a suspended aluminium casing mounted on the back of the each speaker cabinet.  The amplifier circuit boards and active filter boards are one and the same - so this is a new set of electronics.  Not sure what the power amps are related to, but its probably fair to guess that they will be Akurate based.  Power supplies are based on the Dynamik from the Klimax Twin power amp. Rumours abound of a passive version later, but nothing official. You can see a video interview with designer Phil Budd here, where he explains the thinking and tech behind the design. Briefly, we see the familiar 3k mid/tweeter/supertweeter array (with new crossover design and different phasing), an upper bass driver in the front baffle and a pair of lower bass drivers in isobaric configuration in the lower part of the cabinet with the outer driver facing downwards into the stand, along with a pair of bass ports. The cabinet has curved sides but a flat top and is available in the standard Linn finishes or any colour you like. The array is available in black or silver. Personal favourites all feature the black array combined with gloss white, piano black or black ash. Having seen them in a largish room, they look reasonably compact, beautifully finished and much less confrontational than the Majik Isobarik, 242 and 350 speakers. I like the way they look, probably a little bit more than is healthy!  I would prefer the option of the legs in black, perhaps they should match the choice of 3k array?

The first listening opportunity arose at the House of Linn's John Coltrane Linn Lounge event in the last week of April. The speakers were being fed by a Linn Klimax DS/1 streamer and a Kimax Kontrol pre-amp, both sucking their mains from a PS Audio P10 regenerator. A full spec Klimax LP12 / Ekos SE / Kandid was also pressed into action during the evening.  The Linn Lounge is a great idea - its either an evening where a full classic album is played on a high end Linn system, or the body of work of an artist is explored in some depth.  This is the first one I've been to, on this occasion local saxophonist Nat Burchill took us through a potted history of the life and works of John Coltrane.  I think it was an excellent approach - I have very little knowlege of Coltrane's work, but now understand and appreciate it much more than before.  Tracks were played from early albums recorded in the 40s through to his last albums in 1967, just before his death.  Nat demonstrated Coltrane's techniques from his early days of playing to the accepted standards of his earlier days, to how he developed his own interpretations of existing and new works by others, into the much more improvisational later stuff that was challenging in its day, and is still challenging for me today.  I also learnt some jazz terms such as modal, which I hadn't happened across previously.  Excellent presentation, very well illustrated with tracks at sensible points in the story and well received by the capacity (about 40 people?) audience.

So on to the music and the sound of the speakers.  Here, my comments are going to be (probably disappointingly) brief.  There are 2 reasons for this.  The first is that all the music we listened to being John Coltrane or Miles Davis or other artists to whom Coltrane was contributing, it was largely unfamiliar to me.  With the exception of Love Supreme Part I, all of the music was new to me.  It was also 99% lacking any vocals - as these carry much of the emotion of many pieces of music, I think I need to hear much more vocals and much more familiar music before giving a more full verdict on the Akubariks.

The second reason is one that I really find difficult to explain.  Once we got beyond the first couple of recordings (which clearly suffered from the quality of technology available when they were recorded) I tried time and time again to focus on not just the music, but how the speakers were representing that music.  I guess its worth noting that the Klimax front end is reputed to be very musical and very neutral (I've heard them a number of times in different systems and there have always been some kind of limitation - usually the environment, but sometimes the music) - some reviews have called the sound of the electronics as too sterile, but that's not something I find as a problem - I think that everyone is looking for something different in the way their stereo plays music, and those that find Linn too sterile are looking for some kind of colouration or warmth that they are more used to.  From a personal perspective I don't hear them as sterile, I hear them (or don't hear them!) as very revealing and very transparent.

So the first reason means I need to hear more later, hopefully reasonably soon, but after the HoL pair have had some more time running-in.  But the second reason I find both frustrating and very very telling about listening to these speakers.  Frustrating because its going to be very difficult to describe the way they sound. Telling because its now going to be very difficult to describe the way they sound!  Let's start with the one thing that really stood out for me, and that's imaging.  For me, Linn speakers have never been very good at this, from the first Isobarik through to the current range - imaging is approximate rather than precise.  Each upgrade step I've made with my system has brought better imaging - now it is very much three dimensional, and it extends beyond the speakers quite significantly, but a singer's voice is just kind of roughly in the centre and instruments tend to be wider than perhaps you'd expect.  Its one of the compromises and I'm happy to make that compromise given the other characteristics of the system around timing, musical flow, naturalness, unforced but dynamic etc.  Even the 242 and 350 speakers don't image as well as they should.  If you want a reference point for imaging, Cyrus electronics with Vienna Acoustics BBG speakers would be a good place to start.  In the Akubarik, Linn may finally have cracked it.  Even though I was just right of centre in the room, imaging is superb - 3 dimensional and precise, quite a revelation.

One other point to note was one occasion there was a track that generated some bass boominess.  Only one track though - every other track showed none of this.  It was one of the tracks played on the turntable - I'm not saying the turntable was at fault, more of an observation.  It would be good to get some seriously bassy tracks playing through the DS (think Yello, Trentemoller, Nitin Sawnhey, Blues Company) to check this out more thoroughly.

And that's all I have to say on the subject of how these speakers sound, at this point.  Because I really didn't hear them very much.  Yes, throughout the 90 minutes or so there must've been at least 45 minutes of music playing, but I just didn't hear the speakers.  I listened to the music.  I got wrapped up in the music.  I understood much of what Nat was explaining.  I still don't really appreciate some of the later non-rhythmic Coltrane music, but I did get engrossed in the nuances of his playing, the phrasing, the complexity of the tunes. This is the first system I've listened to that I didn't really listen to - within about 30 seconds or so of the start of each track I was completely focussed on the music, even though I was trying to evaluate the speakers.  And maybe that's all you need to know.

More investigation with more familiar music is required.  As it stands at the moment, I think my medium term plans for the system may be taking shape. 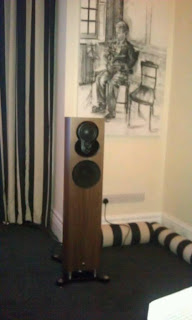 Thanks are due for Brian and Trevor at House of Linn for hosting another excellent and enjoyable evening.  Focussing on the music, of course.
Posted by Neil Hallworth at 08:45 3 comments: