Naim are touring their NDS at the moment in the UK.

Heard this playing at Acoustica in Chester. System as follows:

First, I really do not like Naim speakers, so this needs to be borne in mind. Having said that, today was the first time (in 4 attempts) that the S-600s actually were tolerable. They have this strange "cardboard" quality to some sounds such as snare and fingers rapping on a guitar body. They also harden up quite quickly, which doesn't complement the immdediacy of the Naim electronics at all.

We heard the NDX stand alone (just OK), the NDX with the 555PS (note that the PS is about 50% more expensive than the streamer) which works very well, and then the NDS with 555PS which was clearly the better sounding streamer, but not such a big improvement as adding the power supply to the NDX.

Within the constraints of the speakers (I know, this is very much a personal thing), each step brought greater clarity, more depth, improved image width etc. etc. But, joy of joys, apart from the stand alone NDX, there was none of that Naim shoutyness that, IMHO, is very tiring and somewhat irritating. Until they played XTC's Making Plans For Nigel on the NDX / 555PS, which was just about excrutiatingly painful.

Would love to hear the electronics with some of the larger B&W speakers in the shop. Maybe we can drop back in again soon when the Naim guy's gone home!

Is the NDS / 555PS a Linn Klimax DS rival? Difficult to say as I've only heard them in the context of their own make systems. But I suspect it will be, as anything that can make a pair of Naim speakers sound tolerable is a major achievement in my book.
Posted by Neil Hallworth at 15:12 No comments:

Had the opportunity to spend some time comparing Linn and Naim streamers last weekend.

We have a difference of opinion on how a system should sound - to me the above seems to interpret the music rather than let it out, and it has that Naim immediacy that borders on shouty. It is much better than it was previously when it used to have a first iteration of CDX2 and a NAP180 amp.

So in came a Naim NDX streamer, using the existing XPS2 power supply. We used my Windows 7 Dell laptop, a 2.5" portable drive, FLAC in 16/44.1 and 24/96, an unmanaged network switch and Asset UPnP. Control was via the buttons and screen on the front of the NDS - really simple to use and gets you up and running quickly. I thought it was much simpler to set up than a Linn DS. It took us about 3 minutes to decide that the CD player was a non-event compared to the streamer. The difference is quite astounding - the streamer is much more organic and precise - it has an hint of analogue about it. The control it brings to the music really makes the CD player sound quite nasty, cluttered and over zealous. Job done. This streamer and power supply combination lists at about £6.5k. You can pick up ex-dems and secondhand and get this down to just under £5k. Not many about though, although I suspect more NDXs will start to surface now the NDS is on its way.

We brought in my Akurate DS/0 Dynamik and silver cables (yes, the 282 pre-amp has a couple of phono inputs on the back!) into the Naim system to conduct a direct comparison. We used the same data source as used for the NDX and used Kinsky on the laptop for control. How did it compare? Well its a tricky one really. I really wouldn't like to say which was better, but there certainly were some differences. For me the Linn brings more detail, separates the instruments better, times the music more naturally (more involuntary foot tapping) and is very musical. To counter this the Naim sounds more analogue, a bit more fluid and gives an open, more airy soundstage - almost like the room in which the recording took place was bigger. I know the current ADS/1 lists at £4.5k, but mine set me back just under half that amount.

So you pay your money (lots more for the Naim) and make your choice. I really would be happy living with either in the Naim system, but if you add VFM into the mix, the Linn wins out significantly.

Oh, and if you take the PSX2 out of the system, the NDX is a real disappointment compared to the ADS/0 Dynamik, but still outperforms the CDX2.

If we can find a suitable cable, I'll try and report back on the same comparison in my Linn system...
Scores (a bit simplistic, but there you go - all I'm trying to do is indicate relative performance rather than absolute performance):
Naim NDX / XPS2 = 90%
Linn Akurate DS/0 Dynamik 89%
Naim NDX = 75%
Naim CDX2 / XPS2 = 65%
Posted by Neil Hallworth at 15:09 No comments:

Inside an Active Linn AV5125

Some photos of the inside of the AV5125 five channel amplifier with 2 x stereo active cards installed - 1 x stereo treble and 1 x stereo bass (in this case, the cards are for Keilidh speakers, but the cards are in the same format for all AV5125s. There is room for one more mono card for the 5th channel, but its not installed in this case. 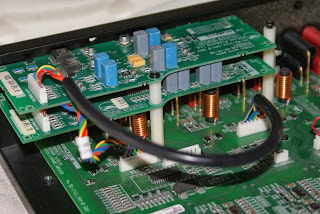 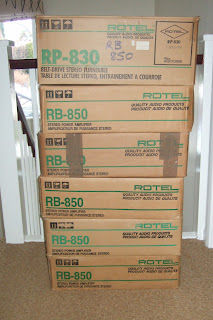 Posted by Neil Hallworth at 14:41 No comments:

Here are some piccies from the event - will write some wordS at some point, but suffice to say that this is quite some experience and demonstrates the huge variety of kit in this hobby, and the even wider variety of solutions and different approaches to sound that folk aim for.  What fun. 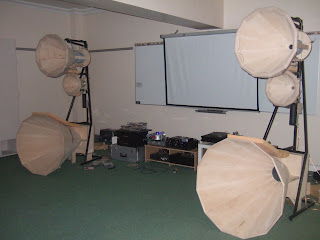 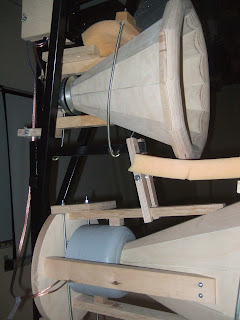